Interested in world cuisine? You couldn’t choose a more appropriate herb than Cuban Oregano. In addition to its tremendous impact as an ornamental, it tells a fantastic story of its worldwide distribution and use.

Perennial in the tropics, its origin was most likely in the East Indies, or possibly Africa, but Cuban Oregano ranges from Malaysia, where it grows wild, to the Caribbean Islands, and it is cultivated from India to Southeast Asia to tropical and subtropical Americas.

This favorite, which has numerous aliases (including Country Borage, Greek Oregano, False Oregano, Spanish Thyme, Stygian Thyme and In Australia, Five-in-one!) This powerful-smelling herb seems to contain large amounts of the oil thymol which accounts for some of its misleading common names.

Worldwide culinary uses of Cuban Oregano include seasoning fish and cabrito with the fresh leaves, or chopping them in chile pastes. The leaves are the primary seasoning in the Cuban black bean soup, frijoles negros. A salsa made by mincing the leaves together with various unripe fruits is served as an accompaniment to rice.

In Java and Malaysia it is used in curries and in India to flavor beer! Clearly, we’ve missed some opportunities here to take advantage of Cuban Oregano’s culinary attributes! But even if you aren’t a cook, you can’t help but love this herb’s presence in your garden – the soft textured green leaves trimmed with stunning white variegations – it thrives in our hot humid summer and fall.

Plant it in light or partial shade, water sparingly, and fertilize periodically with a slow-release organic fertilizer. Prune and shape to keep it tamed – Cuban Oregano’s habit, while not invasive at all, can be somewhat sprawly.

Cuban Oregano won’t survive a winter outdoors here, but protected in a container over the winter, may survive to thrive again. This herb is a winner! 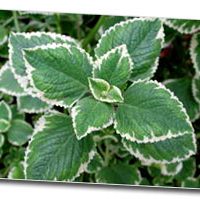