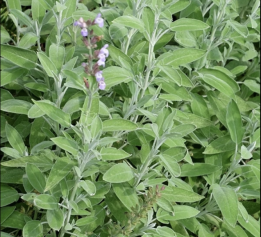 Herb Picks featured for 2022 are especially associated with Madalene Hill, who either discovered the specific herb and introduced it into the marketplace or because it has been named in her honor. During every year, these herbs are found scattered throughout Arbor Gate gardens, and especially in The Madalene Hill Herb Garden located at the Herb House entry.

This exceptional culinary and ornamental sage was developed in Israel for commercial production throughout desert areas of the Middle East. For several years it was labeled ‘Hybrid #4’ or in the American market as ‘Silver Sage’. Its heat tolerance enables it to survive and even thrive during our summers much more readily than ordinary garden sages, in spite of the humidity that accompanies our high temperatures. It is an early and prolific bloomer in the spring. Madalene discovered it packaged and labeled as “Oregano” among the cut herbs in a San Antonio grocery store. Even today, it often bears a variety of market-invented names. Its original Israeli name, “Newe Ya’ar”, translates into English as “oasis in the desert”, according to one Houston scholar.