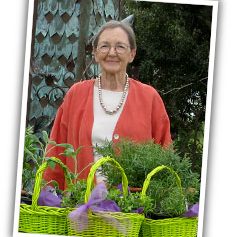 Our monthly herb picks for this year will focus on a variety of familiar culinary herbs. Some, like parsley, are such old friends that we overlook a few of their culinary uses. Others, like rosemary, occur in numerous varieties, some better for the cooking pot than others.

Remember that October 1 is New Year’s Day for herbs — many, if not most, of the featured herbs this year will take kindly to a cool season transplanting. If you are interested in the herbs listed for July and August, putting oﬀ transplanting until October might be a good idea.

Two classic culinary herbs, both lovage and chervil are signiﬁcantly underused in our kitchens. Though lovage is a perennial plant in other regions, it performs as an annual for local gardeners. Both of this month’s choices perform as cool season stars in our gardens, along with parsley and cilantro, and are best planted after October. During unusually warm winters such as that of 2018 and early 2019, these members of the umbelliferae bloomed many weeks too early. As with all herbs, blooming inhibits the energetic production of ﬂavorful leaves prized in the kitchen.

Lovage is the equivalent of a better-tasting celery, and it is sometimes considered an ornamental plant in the garden. In cooler climates it attains 2 or 3 feet in height, provides typical umbrella-shaped ﬂat blossoms similar to those of its umbel relatives (parsley, dill, fennel, and cilantro, for example). Were it not for our over-heated summers, this perennial might in fact spend a long and productive life in our gardens. Lovage should deﬁnitely be planted locally after the October 1 New Year’s Day for Herbs.
A classic in French recipes, as many uses are found for lovage in our recipe books as for other celery-type herbs. It makes a ﬁne addition to soups, stews, and salads, and its ﬂavor is a natural accompaniment to ﬁsh, especially salmon. Line the pan with lovage stems and their lavish leaves and the broiled or roasted salmon ﬁlets will take on a whole diferent character and complexity of ﬂavors.

Chervil is another cool season culinary herb that is frequently overlooked by local gardeners. It’s delicate, frilly foliage is a lovely addition to the garden during our cooler months, and since it is quite happy in a shady spot, it does double duty — ornamental as well as culinary — planted around the base of a rose or other blooming shrub during a time when fewer blooms decorate our gardens.

Though it blooms and bolts during the warm early days of spring, chervil’s mild anise ﬂavor through the winter is reminiscent of tarragon, which has made it a centuries-old classic in French cuisine. One of its desirable attributes is that it reseeds every year. And during its appearance in the winter garden, it provides the tarragon ﬂavor cherished in many winter recipes and in salads and vegetable dishes as well.

Both lovage and chervil should be used more frequently in local gardens. Both are easy to grow and available every year for planting after the New Year for Herbs, Oct. 1.