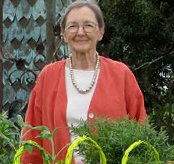 A noted member of the Umbelliferae family, lovage is the ultimate (and classic) celery herb. Its complex flavor, once experienced in soup, stew, or a rich chicken salad (or ANY salad, for that matter), it will never be forgotten. Though it is technically a perennial, lovage is best treated as a cool season annual in our area, because it often gives up the ghost in our summers’ temperatures.

Totally winter hardy, lovage can be successfully grown in the ground or in large pots, but it is most successful if placed in an area with high shade. If happy, lovage will reach 2 to 3 feet in height and continue to produce stems throughout the cool months. Frequently grown as an ornamental, its long straight hollow stems are sometimes used as drinking straws!

When lovage becomes too dry, the stems temporarily lose their upright habit — much better to provide adequate water whether in the ground or in a pot — and fertilize with a liquid or dry slow-release organic fertilizer (Arbor Gate Blend is effective wherever the lovage is planted).

Since lovage is widely used in French cooking, great recipes abound — but since it is mild as well as distinctive, you’ll enjoy adding it to your favorites as well. And after harvesting the leaves for the dish you’re making, try the crisp stems as another form of celery!