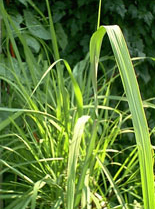 When I first planted East Indian Lemon Grass, a four-inch sized plant, I had absolutely NO IDEA how big it would eventually be! I placed it ever so carefully in a corner of a four-by-eight foot raised bed. Little did I know that I should stand back while it shot up to about four feet!

It did, though, and became as beautiful and graceful as any purely ornamental grass. The sound of the wind in its long bright green graceful leaves, or blades, provided a wonderful song in the background of my summer work in the garden.

Not until the depth of winter did the green give way to brown, and even then, my lemon grass made a statement in that bed—still tall and graceful through the cold days and into spring.

I realized whilst cutting off the brown to make room for new green growth that the lemon grass was taking more than its rightful share of the bed, so I dug it up. Regretfully, of course, but it was easy to find a new home for it.

This wonderful perennial takes off in any well-drained soil that’s in full sun and requires virtually no further care after planting other than shearing for the spring season.

East Indian Lemon Grass, Cymbopogon flexuosus, differs only slightly from its cousin, West Indian Lemon Grass. Both have a sweet/tart flavor that’s highly valued in Asian cuisine. Lemon Grass is used in everything from curries to teas and lends an amazing aromatic citrus quality to many ordinary dishes like steamed rice.

The East Indian variety has slightly narrower stalks and a smaller bulb at the base of each stem. This lower part of the stem is the part having culinary uses. To harvest for the kitchen, go to the base of a stalk and cut it off at ground level or even below. Discard the grassy top part of the blade.

I like to take several stalks, cut them to about 12 inches in length, tie the whole bunch in a knot and toss it into a pot of boiling rice. The kitchen comes alive with its wonderful scent, and the rice calls everyone to the dinner table.

Who knew grass could be so glorious!