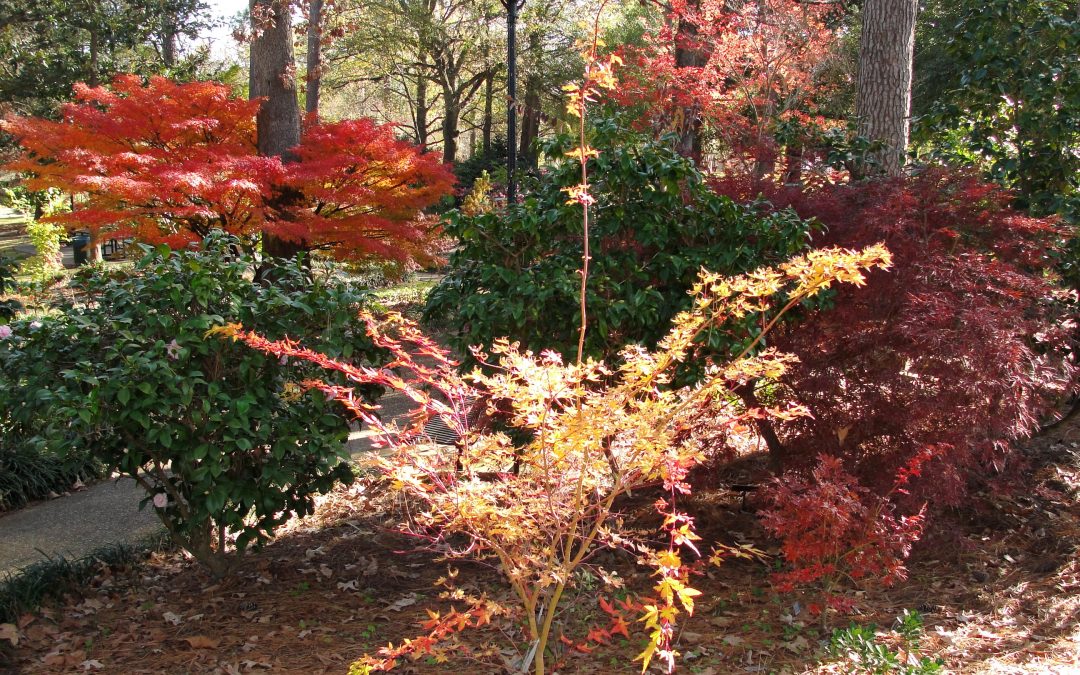 When Vance Burks moved to East Texas in 1946, he quickly uncovered a secret in the sandy, acidic soil. Originally from Shreveport, this green thumb discovered that what sat beneath his feet was perfect for one of his favorite shrubs. By the next spring, he had spread his love of camellias to the city’s elite, who were actively planting them around their homes. As more Tylerites caught the craze, Burks helped found the Tyler Camellia Club. A partnership between the city and the club provided a perfect venture for a public camellia garden.

Keith Mills, former Tyler Rose Garden superintendent, explained how the shade-loving camellias kept the garden relevant. The public loved to visit the Rose Garden during its growing season; however, the remainder of the year saw little visitation as the garden lay dormant. To address attendance concerns, the City of Tyler designated 5 acres south of the Rose Garden for a camellia garden. The plan was to show off these winter flowers and help spur interest when the Rose Garden was not blooming.

Brian Thompson, whose father Henry designed the Rose Garden, planned the Camellia Garden. It started with one large bed south of the Rose Garden near the current daylily bed. The Tyler Camellia Club, along with the Texas Camellia Society and local nurserymen donated 68 plants representing 53 varieties. The shrubs were planted in a grove of existing native trees to provide an ideal environment. The club tended the garden, while the city sprayed, watered, and mulched.

Tyler honored Vance Burks for his dedication and educational service, naming the Camellia Garden after him in 1960. Two decades later, winter freezes killed more than 6,000 roses and many camellias. According to Wayne Pianta, former rosarian at the Rose Garden, Hoyt Williams from the Tyler Men’s Garden Club, and Dr. Eldon Lyle, Rose Research Foundation pathologist, helped restore the gardens through transplanted camellias from Dr. Lyle’s collection. Louis Squyres, the Camellia Garden’s primary benefactor, purchased more to assist in the restoration. Unfortunately, the 2021 freeze did the same and new camellias are currently being added.

Keith Hansen, former Smith County horticulturist, and the Smith County Master Gardeners adopted one of the beds in the northwest corner of the Camellia Garden in 1997 and named it the Shade Garden. Plants that thrived in limited sunlight were the showcase for this bed and a variety of shade-tolerant perennials included hostas and ferns were introduced. Up until his retirement in 2015, Hansen continued to add unique plants to be displayed or trialed there. The Master Gardeners partnered with the Tyler Men’s Garden Club in the fall of 2000 and planted 25 Japanese maples throughout the Camellia and Shade Garden. The group planted additional camellias and azaleas in various beds in 2012 and thanks to a generous donation from Kluber Lubrication, dozens more Japanese maples were added in 2019.

In 2018 the Smith County Master Gardeners and I decided to take on the combined Shade and Camellia Gardens and simply refer to the entire two-acre area as “The Shade Garden.” The Shade Garden is part of our beautiful Tyler Botanical Garden at the Tyler Rose Garden and features a fine collection of azaleas, camellias, maples, and more.

Greg Grant is the Smith County horticulturist for the Texas A&M AgriLife Extension Service. He is author of Texas Fruit and Vegetable Gardening, Heirloom Gardening in the South, and The Rose Rustlers. You can read his “Greg’s Ramblings” blog at arborgate.com, his “In Greg’s Garden” in each issue of Texas Gardener magazine (texasgardener.com), or follow him on Facebook at “Greg Grant Gardens.” More science-based lawn and gardening information from the Texas A&M AgriLife Extension Service can be found at aggieturf.tamu.edu and aggie-horticulture.tamu.edu.