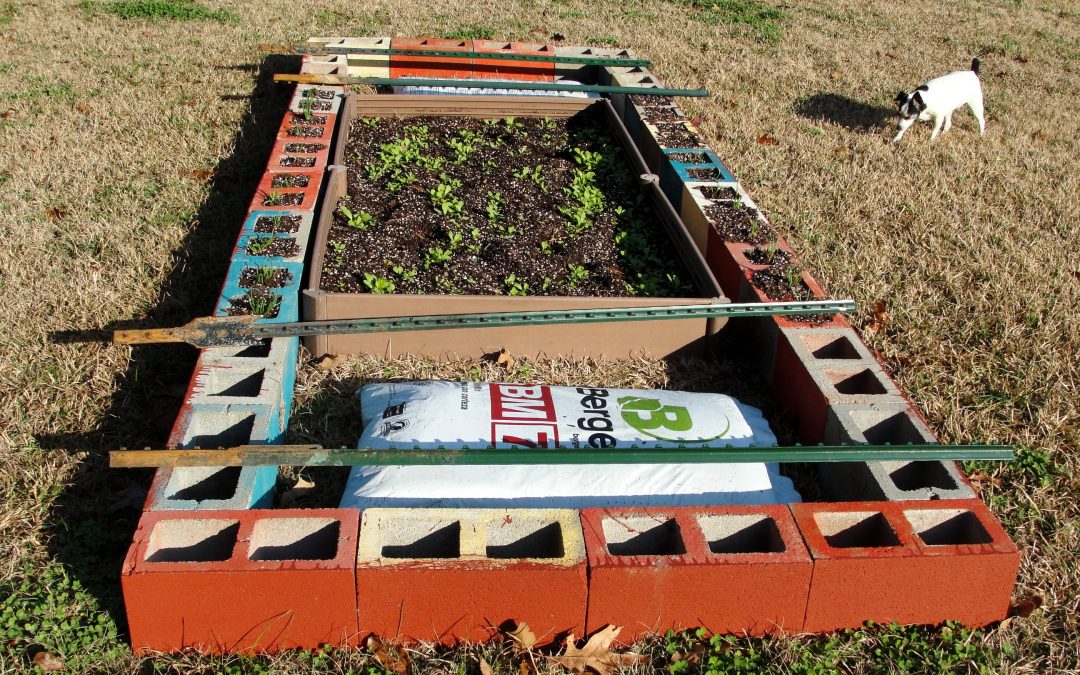 We were raised pretty lean and didn’t have that many toys other than bicycles, plenty of pets, and the great outdoors.   However, one of my fondest store-bought toys as a child was a stack of wooden blocks.   It came in a red mesh “onion sack” bag which I quickly wore out.  My momma then sewed me a cloth one that looked like something a miniature Santa or a hobo with a stick would haul around.  There was a limited variety of assorted shapes and colors (red, blue, green, and yellow if I remember correctly) but I sure put them to use building a myriad of boats, castles, forts, and houses. 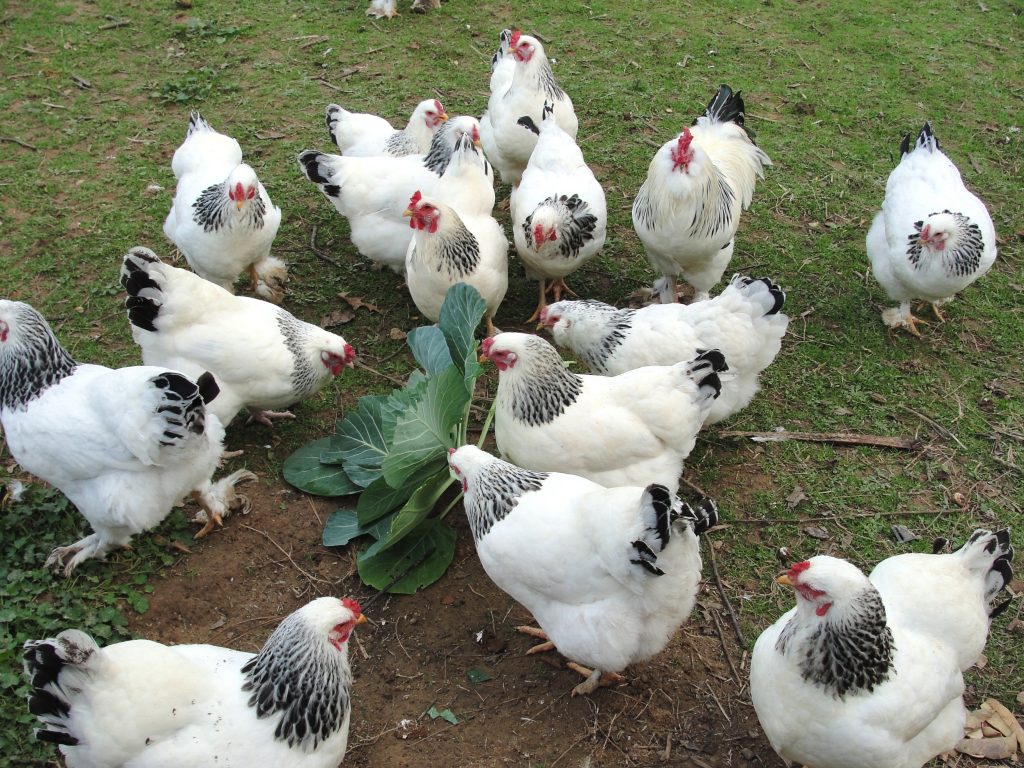 Fast forward half a century and I’m still playing with blocks…cinder blocks that is.  I picked up the practice again accidentally, however.  It all started when I got married and Mrs. G fell in love with “her” chickens.  Previously my chickens were kept between the hen house and the chicken yard and only allowed to roam my large vegetable garden to clean up between crops or to chase bugs below taller, tougher crops like okra and sweet corn.  But the Light Brahmas convinced her that they needed to own more wide-open space, so Greg and his garden moved up the road to Big Momma’s to grow corn, okra, and peas.   Nobody has to talk me into loving chickens because I’ve been playing with them as long as I’ve been playing with blocks.

All was fine, except a real gardener needs veggies close enough to pamper, pick, and protect.  Acer has great ears but hearing a raccoon gnawing corn from a quarter of a mile away is asking a lot!   So, I picked a sunny flat spot near the water spigot at my little pump house and plopped down a prefab interlocking instant raised bed made from fake wood.   Naturally, it didn’t take Mr. Green’s jeans thirty seconds to realize: 1.  It looked funny next to my great granddaddy Grant’s old square-notched log corn crib, and, 2.  It was large enough to grow about four tomato plants assuming I used determinate varieties and held back on fertilizer and water.  Clearly, the folks that created it weren’t planning on feeding an extended family. 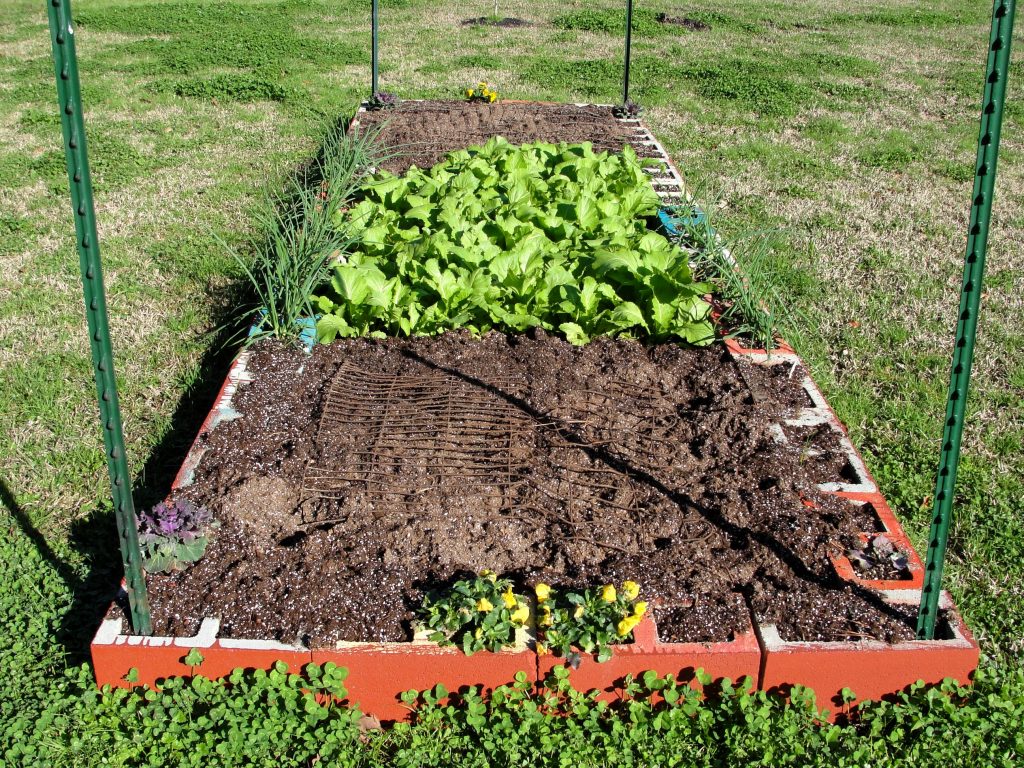 Luckily, I was gifted some used cinder blocks from a school garden being scuttled in Tyler.  Yes, like my original blocks they were painted bold colors, but that was fine by me.  Where I come from “gaudy” is a compliment.  So, using what I had, I expanded the block party so I could at least grow a crop of mustard greens for my Cajun.  I filled the bed with compost and topped it with slow-release fertilizer and commercial potting soil.  I also painted the outside of the blocks barn red so they would fit my farm décor better.   You can guess how excited Mrs. G’s cats were to find out that I had constructed a brand-new outdoor litter box just for them!  Next step:  Concrete reinforcing wire as a pawful deterrent.  I also added steel t-posts and a piece of cattle panel at each end to grow cucumbers and other climbers.  During the summer, I use drip irrigation and a timer and typically run it for 2 hours about once a week. If I happen to rake up enough pine straw, I mulch it as well.  When I plant my home-grown sweet potato slips, I also use overhead irrigation with a Rain Bird sprinkler until they are established. 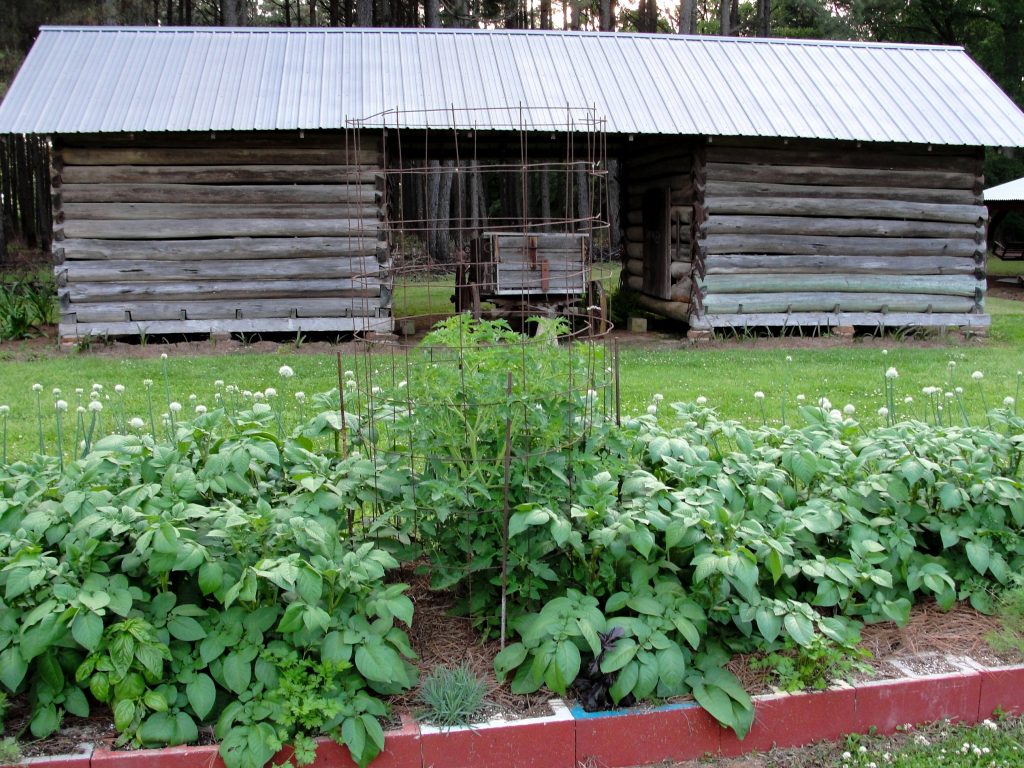 It didn’t take long for me to designate this as my “potato bed” and began using it for a crop of Irish potatoes in the spring and sweet potatoes in the summer with cucumbers, green beans, and snow peas on the ends.  But you know what?   If your bed isn’t big enough to produce at least a bushel of potatoes, then it isn’t big enough!   I also want it to be the same width as the corn crib behind it so it will be in scale and be easy to mow around.  So, I just recently added ten more cinder blocks to plant some yellow summer squash for my mom and will add ten more in September to plant cabbage for the cool season (anybody remember what THAT feels like???).  Both Mrs. G (Stahl) and I (Block, yes I said Block) have just enough German in us to make cabbage and potatoes essential building blocks in our food pyramid.

As always, I’ll start with an application of slow-release fertilizer topped with a professional peat-based potting soil.   I’ll plant my cabbages around two feet apart and water them in with water-soluble plant food (such as Miracle-Gro).  I’ll irrigate them about twice a week with a drip line until the fall rains eventually (I hope) come.   I’ll then lightly sprinkle high nitrogen fertilizer (21-0-0, chicken litter, etc.) around them about every three weeks until harvest nears.   I’ll keep them treated with Bacillus thuringiensis (Dipel, Thuricide, Organic Worm Killer, etc.) to keep the cabbage loopers from eating them before we do.  I’ll also plant snow peas on the ends the same time as I plant the cabbages and hope for a mild winter.  If the peas freeze, I can always squeeze in another crop in January or February. 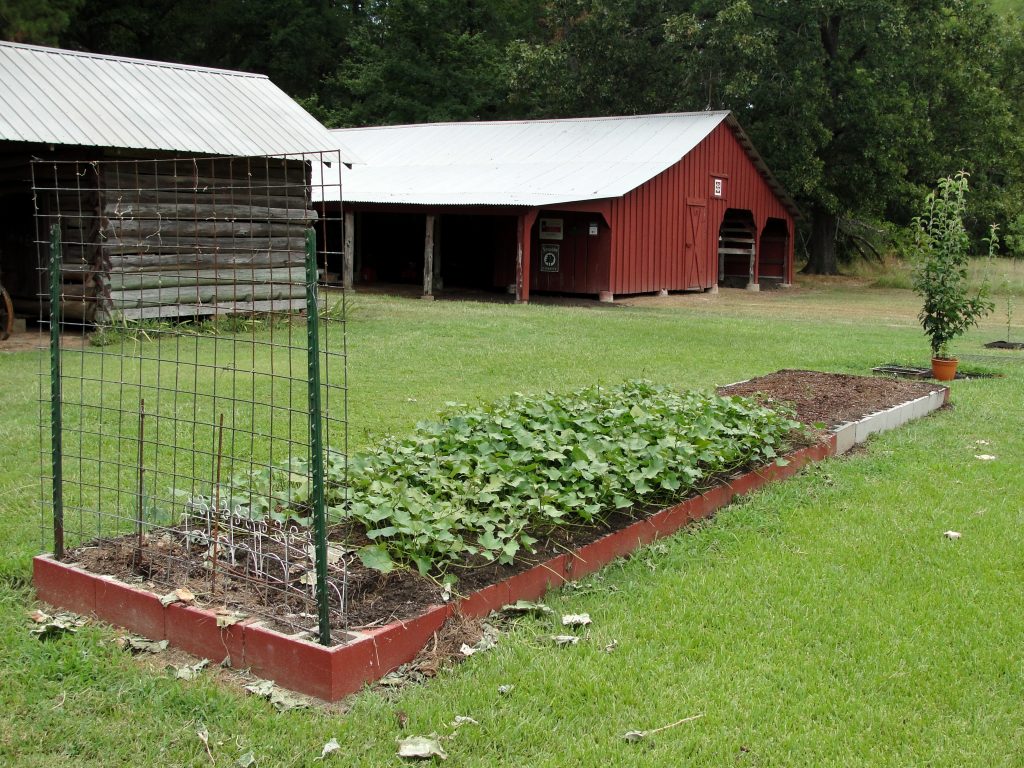 Nothing horticultural is ever simple with me.  On the left, I planted a ‘Kieffer’ pear but will graft onto it an old heirloom pear from the Ezra Wheeler homeplace down the road.  This will give it a Pyrus calleryana rootstock, a ‘Kieffer’ interstock, and an “Ezra Wheeler” scion.  My mentor Dr. Parsons once told me that he thought my “Ezra Wheeler” pear was a ‘Garber.’  We’ll see.   On the right I planted an Asian pear  (‘Shinko’) but will have to remove it when I finish expanding the bed.  On the far right, in the correct spot, I planted what was collected, identified, and propagated as a ‘Garber’ on Pyrus salicifolia.  The chickens and I can’t wait for pear pies!   I’m sure they’ll be a hit with everybody on our block as well.

Greg Grant is the Smith County horticulturist for the Texas A&M AgriLife Extension Service.  He is author of Texas Fruit and Vegetable Gardening, Heirloom Gardening in the South, and The Rose Rustlers.  You can read his “Greg’s Ramblings” blog at arborgate.com, his “In Greg’s Garden” in each issue of Texas Gardener magazine (texasgardener.com) or follow him on Facebook at “Greg Grant Gardens.”  More science-based lawn and gardening information from the Texas A&M AgriLife Extension Service can be found at aggieturf.tamu.edu and aggie-horticulture.tamu.edu.