Have a Holly Jolly Christmas 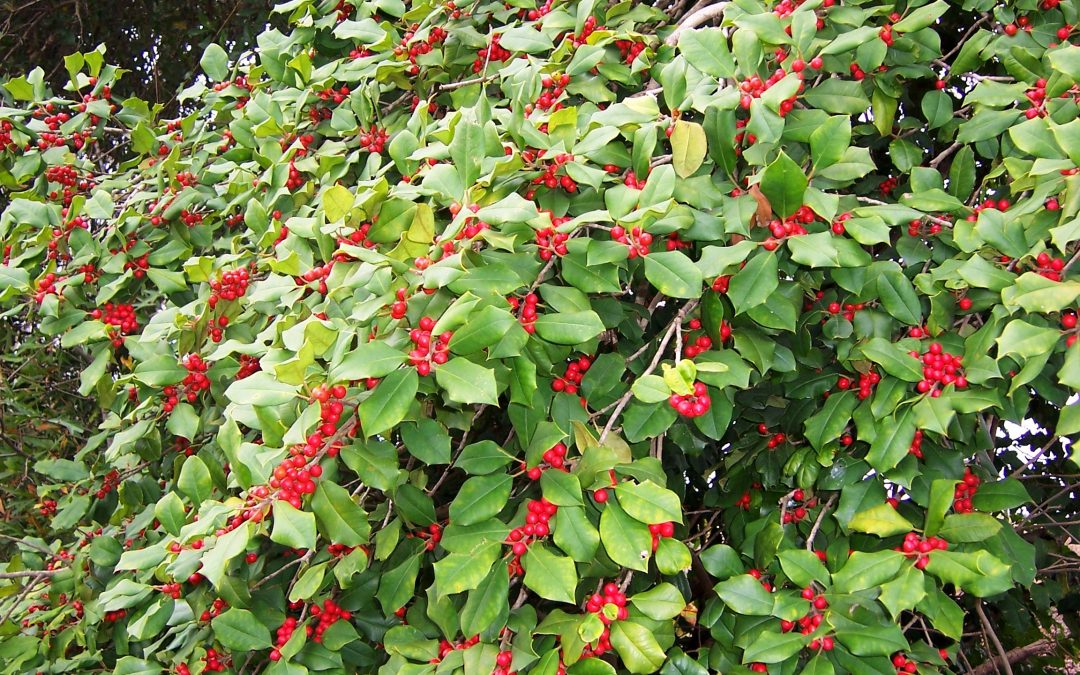 Mistletoe and Ivy, Pine boughs and holly, A Christmas without evergreens, Wouldn’t be so jolly.

The genus Ilex contains over 400 species native throughout the world. The most common landscape forms include both Asian and native American species. Hollies are further divided into evergreen and deciduous types. In recent years, the showy berried deciduous hollies have gained in popularity. The evergreen types of course never waned. Holly selections range in ultimate height from trees to shrubs and include both spiny-leafed and spineless types.

Evergreen hollies have numerous landscape uses. They can be used as attention-grabbing specimens. They make great screens. They are great for framing views. They make the finest of hedges. And they are often tops for topiary work.

Some of the more commonly available evergreen hollies include:

American Holly (Ilex opaca): One of our most beloved native American evergreen trees. Can grow to 50 feet. A number of cultivars are widely available. Females have red or rarely yellow berries. This is one of the most popular hollies for Christmas greenery.

Chinese Holly (Ilex cornuta): This Southern landscape stalwart is native to China and Korea. The strait species has very spiny but attractive foliage. Less spiny selections are available. Selections range in size from dwarfs to large shrubs. Many have showy large red berries. Among the most common are: ‘Burfordii’, ‘Dwarf Burford’, ‘Rotunda’, ‘Carissa,’ and the hybrid with English Holly, ‘Nellie R. Stevens’. There are several selections with yellow berries and even several with yellow variegated foliage.

Japanese Holly (Ilex crenata): A native of Japan, this species was once a common landscape shrub in East Texas. ‘Sky Pencil’ is sold but struggles during droughts. Japanese holly has mostly been replaced with yaupon in the South, which is more adapted to the heat and humidity.

Foster Holly (Ilex x attenuata): This group includes hybrids between Ilex opaca and Ilex cassine, the Dahoon holly. Some of them have large foliage like their American holly parent, and some have smaller foliage like their Dahoon parent. Most are small trees or large shrubs and have showy fruit and attractive foliage. ‘Foster,’ ‘Greenleaf,’ and ‘Savannah’ are the most common.

Yaupon Holly (Ilex vomitoria): This outstanding species is native to the southeastern U.S. It is available in three different forms: the standard large shrub/small tree, weeping small tree, and dwarf shrub. Dwarf yaupon is the most common dwarf shrub in the South. This unique holly species have small, spineless leaves and takes shearing extremely well. There are both red-berried and yellow-berried forms available.

Greg Grant is the Smith County horticulturist for the Texas A&M AgriLife Extension Service. He is the author of Texas Fruit and Vegetable Gardening, Heirloom Gardening in the South, and The Rose Rustlers. You can read his “Greg’s Ramblings” blog at arborgate.com, his “In Greg’s Garden” in each issue of Texas Gardener magazine (texasgardener.com) or follow him on Facebook at “Greg Grant Gardens.” More science-based lawn and gardening information from the Texas A&M AgriLife Extension Service can be found at aggieturf.tamu.edu and aggie-horticulture.tamu.edu.