VIDEO: An Introduction to Companion Planting 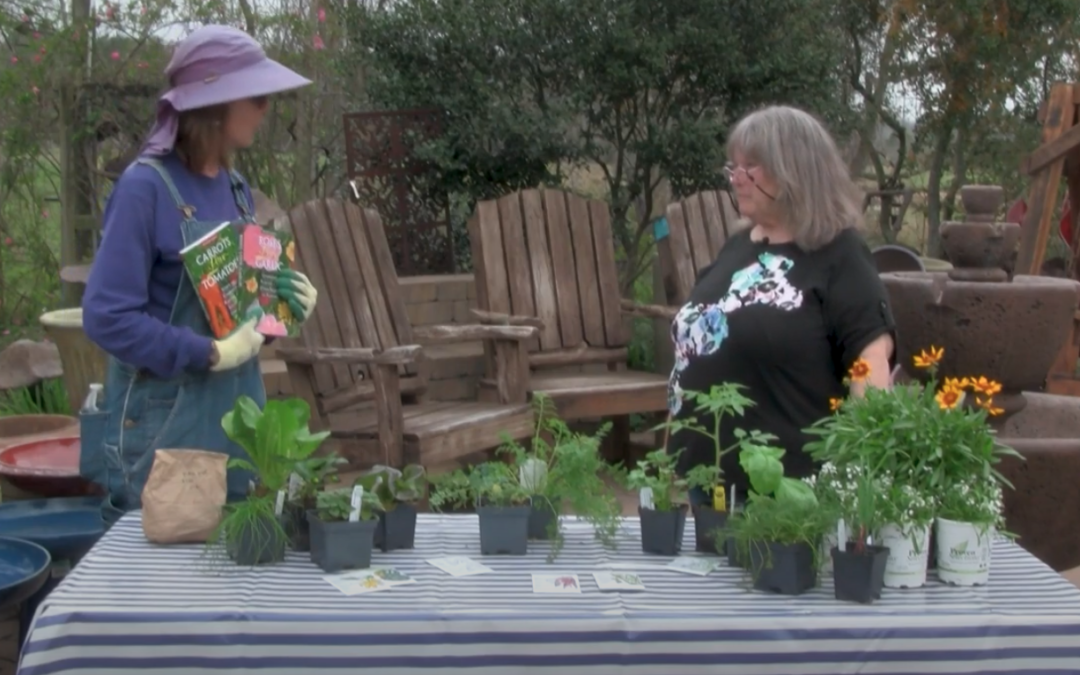 – Thanks for coming today. You know, I asked you to come so we could do this video on a subject that is finally coming to the forefront. And as you know, our grandparents, not only in their ornamental gardens but in their edible gardens as well, had a little practice that we called companion planting.

– Up until recently, there was really no scientific evidence of its effectiveness. They knew, we know, and now you know it does work.

– It does. And science is catching up. The more we study plant science, the more we’re learning how did those things that our grandparents observed and knew worked from their observation, how do they actually work from a scientific basis? And the more we learn about it, kind of the more exciting it really is.

– They really are. Probably one of the oldest and one of the first that I learned was tomato and basil. We often combine them in the kitchen. They have very complementary flavors, but they assist each other in the garden as well. So longtime tomato growers knew that when basil is planted close to the tomatoes that it enhances their flavor and also their color. It has that much effect.

Plus there’s the idea that some of these herbaceous plants that have a lot of oils in them do repel insects, so it’s kind of a twofer. Now, scientists caught up and knows that basil actually puts out a root exudate, a chemical through their roots that suppresses some of the diseases that can cause rots in tomatoes.

– And African blue is your number one pollinator.

– It is. It’s just absolutely beautiful stuff and brings everything into the garden, plus the fact that every time you brush by them, you get those beautiful, beautiful scents as well.

– Well, you know, and you mentioned a root exudate, that is where rue also comes in as a great companion for our roses to help combat the fungal diseases in them as well.

– Isn’t that good to know? And then you’re always looking for something to plant under the skirts of your roses.

– Yeah, they really are. And speaking of which, the alyssum is too, attract lots of beneficial insects, including giving cover for a group of insects we seldom think about which are the ground beetles. We often don’t see beetles in our garden, but they are there and they’re fabulous predators.

– So you also put together here, you’ve got some potatoes, and then some onion chives.

– Yes, as well, and they also do very well with lettuces and strawberries. So these combinations, I think they’re beautiful from the standpoint…

– …that they have different leaf texture, different colors. Strawberries always do well growing underneath and around things. They give us some weed suppressant in addition to being quite pretty as well.

– Well, and speaking of weed suppressant, your potatoes.

– Yes. Fabulous for that. Both are regular, red potatoes are regular potatoes, and also sweet potatoes. Amazing for weed suppressant, a really good way to establish a new area that you want to plant. Grow them there for a year, let them go ahead and work their magic in the soil.

They’ll loosen it and then you can plant additionally after that.

– And they’re also great against the ever-dreaded nutgrass, right?

– Oh, yes, absolutely. Sweet potatoes for sure. Beautiful for the nutgrass.

– Wonderful for the nutgrass. Now, what about the ornamental potato vine?

– Ornamentals work just as well. Even though we don’t harvest the tuber, and technically that tuber would be edible, it’s just not attractive to be eaten, but the ornamental does just as well as the edible does. And so if you’re looking for that extra color, or maybe you’re not a sweet potato person, you can grow the ornamental and get the same effect.

– I love that. So what do we got over here with the onions?

– Well, the allium family, the chamomile, both of those have good repellent qualities and do very well in the garden together. They actually are flavor enhancers. Carrots and beans do well, and you’ll notice too that we’ve got some combinations that work from a design standpoint where you can grow your beans and then your carrots can grow as a skirt underneath them. And then there are some interesting things like the catnip repel squash bugs so you can kind of make those companions in the gardens and get some of that repellent quality.

– And you know, one of my favorite combos is onion, dill, and cabbage.

– Yes. That works beautifully. A lot of people will also plant some of the allium family in the hills of squash to repel the squash bugs. And then some plants are just great like this Queen Anne’s lace, so we’ll be bringing in parasitic wasps and other predators that kind of patrol our gardens and do some of the work for us.

– So you’re right. This is great fun, and it’s fun to experiment and it’s so much fun to learn something new.

– Something old has become new again.