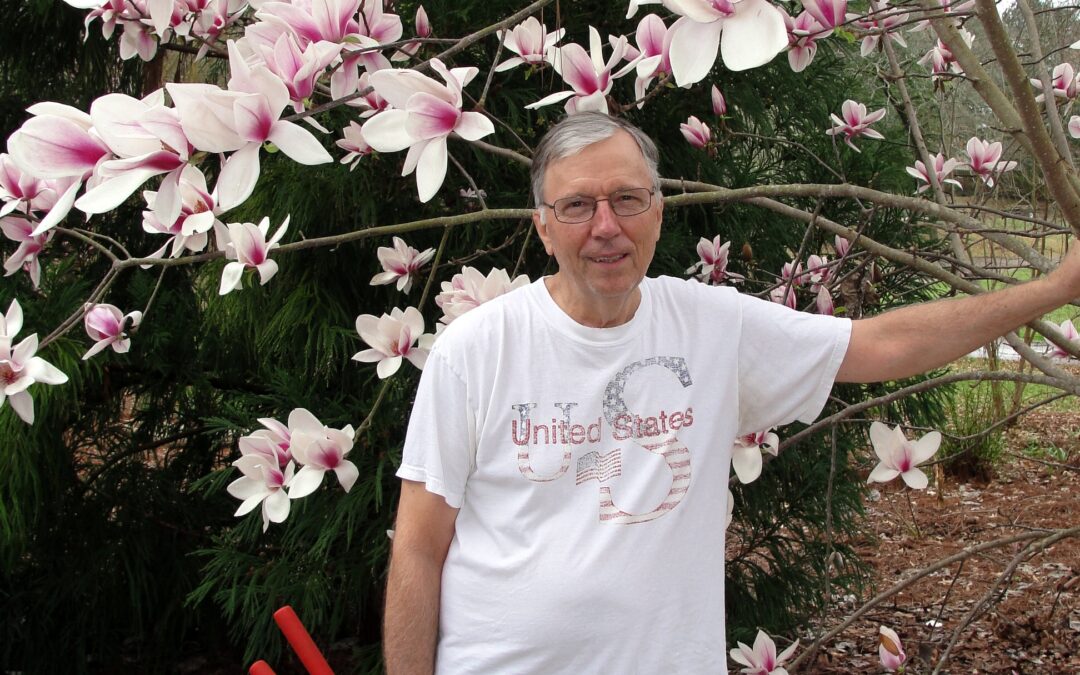 I have at least two mandatory Texas A&M AgriLife Extension Service result demonstration reports due at work the last day of each year. While working on a Lycoris trial report, I thought back to my days as a kid and how much I loved seeing the red spider lilies (Lycoris radiata) bloom in both cultivated and abandoned landscapes throughout East Texas.  There’s a good reason some folks call them magic lilies, because they sure seemed like magic to me as they signaled the end of hot, dry summers and the beginning of cool, moist winters. Although the petals and stamens of spider lilies are delicate and brittle, the bulbs are tough a

nd long lived.   It’s a loveable combination.  Thinking about them made me ponder my other childhood horticultural heartthrobs.

One was certainly amaryllis (Hippeastrum).  This affair first started when I read that my childhood idol, George Washington Carver, both grew and painted them.  So, after lusting after them in catalogs, my mom obliged by purchasing one for me each Christmas.   By the time I was in high school I had to have a small fiberglass greenhouse to hold them all.  I was also in love with anything grown in a greenhouse.  Blame it on Frosty the Snowman.  Unfortunately, when I headed off to Texas A&M University, I had to plant my Dutch amaryllis collection outside in a flower bed and a zero-degree winter killed them all.   My intrigue grew even more when I noticed that the St. Joseph’s lilies (Hippeastrum x johnsonii) in the country gardens didn’t freeze at all.

Thanks to a lone tree at the old Ezra Wheeler homeplace in Arcadia where my dad ran cows, another young love of mine was baldcypress (Taxodium distichum).  I was intrigued by the soft, coniferous, deciduous needles, interesting fall color, and odd round cones.  Sadly, not one person could identify the tree for me; and I was led to believe it was some rare tree imported from who knows where.   Later I found out that one of my Granny Ruth’s Jones uncles dug and transplanted it from the Sabine River bottom.   It’s rather unbelievable now that nobody could identify the state tree of Louisiana and the Spanish namesake (“Sabina”) for the Sabine River that separates us. 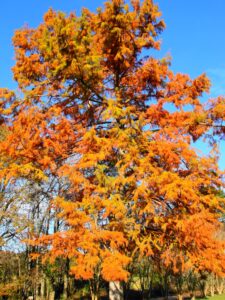 Though I failed miserably every time I tried to seed them, I was then, and will forever be enamored with all seven species of our state flower. If a Texan can’t love a bluebonnet (Lupinus) then they need to find another home!  Every year I carefully tend a small patch of sandy land bluebonnets(Lupinus subcarnosus) and try my best to spread them a bit. I also take every opportunity to grow Texas bluebonnets (Lupinus texensis) in assorted colors in beds and pots.  I’d be blue without them.

Along with bluebonnets, flowering dogwood (Cornus florida) is another plant I vowed to never pull up or chop down. Thanks to working with Dr. Jerry Parsons developing multi-hued bluebonnets, I broke my Lupinus floral promise rogueing off-type colored seedlings. But to this day, I have never harmed one live twig on a dogwood tree nor do I plan to. We only had a single dogwood tree in our yard growing up in Longview and would you believe our dog Frisky chewed it to death, barking up the wrong tree? He also gnawed all the bark off a nearby blackjack oak trying to bring a squirrel to the ground. I have only one dogwood tree in the woods on my farm which I lovingly tend after a black walnut tree shoved it to the ground. After spreading dogwood fruit each fall however, I do have several young seedlings that have sprouted. I’ll keep at it until I die. I love my babies too! 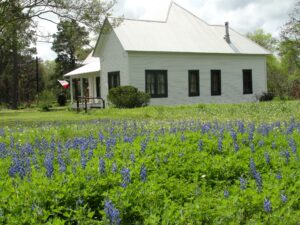 Another tree I was dearly in love with as a kid was what Marie Daly told me was a “red maple.” She had one in her front yard and it was to die for.  It was the first Aggie maroon plant I had ever seen. Technically it was a red-leafed Japanese maple (Acer palmatum atropurpureum) and not a true red maple (Acer rubrum) but I didn’t know and didn’t care. I just wanted one.

I also fawned over the screaming red-orange fruit on pyracantha bushes. Sadly, the seedling my Grandmother Emanis dug from beneath one and gifted me turned out to be a Chinese privet instead! I even built a little miniature greenhouse over that tyke to keep it cozy the first winter. I’ve actually never grown a pyracantha but I always smile when I see one loaded up with colorful fruit.

Perhaps my favorite tree of all what was I knew as the “tulip tree” (Magnolia x soulangiana), also known as saucer magnolia. Since it was the first showy thing to bloom during the tail end of winter it was full of pure horticultural hope and promise. The large pink and white flowers were so prominent against the bare gray branches that I could spot them from the car in any garden in town. Since I didn’t own one, I didn’t care that they always seemed to cause a flower-wrecking late freeze.  There are many cultivars in many tints (SFA Gardens in Nacogdoches has a bunch) and I’m still enamored with all of them. 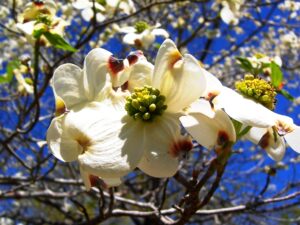 And speaking of tulips, they were the very first bulb I was smitten with as they were the symbol of horticultural Holland and a dream world that I could only imagine. I later moved on to bulbs much more adapted to our wet-dry erratic Texas climate; but they planted a craving on me before any other and will always hold a special place in my heart. 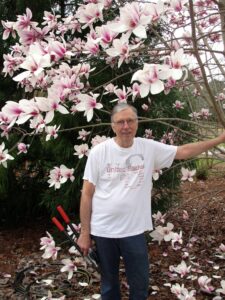 Happy New Year!   May you love long and prosper.   -Greg

Written by Greg Grant Greg Grant is an award-winning horticulturist, conservationist, photographer, and writer from Arcadia, Texas. Each month he writes an article for The Arbor Gate Blog where he is given free range to write about any topic that interests him. During the week, he is the Smith County horticulturist in Tyler for the Texas A&M AgriLife Extension Service and on the weekends, he and his wife tend Greg’s grandparents’ old farmhouse, his Rebel Eloy Emanis Pine Savanna and Bird Sanctuary, a flock of laying hens, one Jack Russell, one German shepherd, and three cats.