The Return of Winter 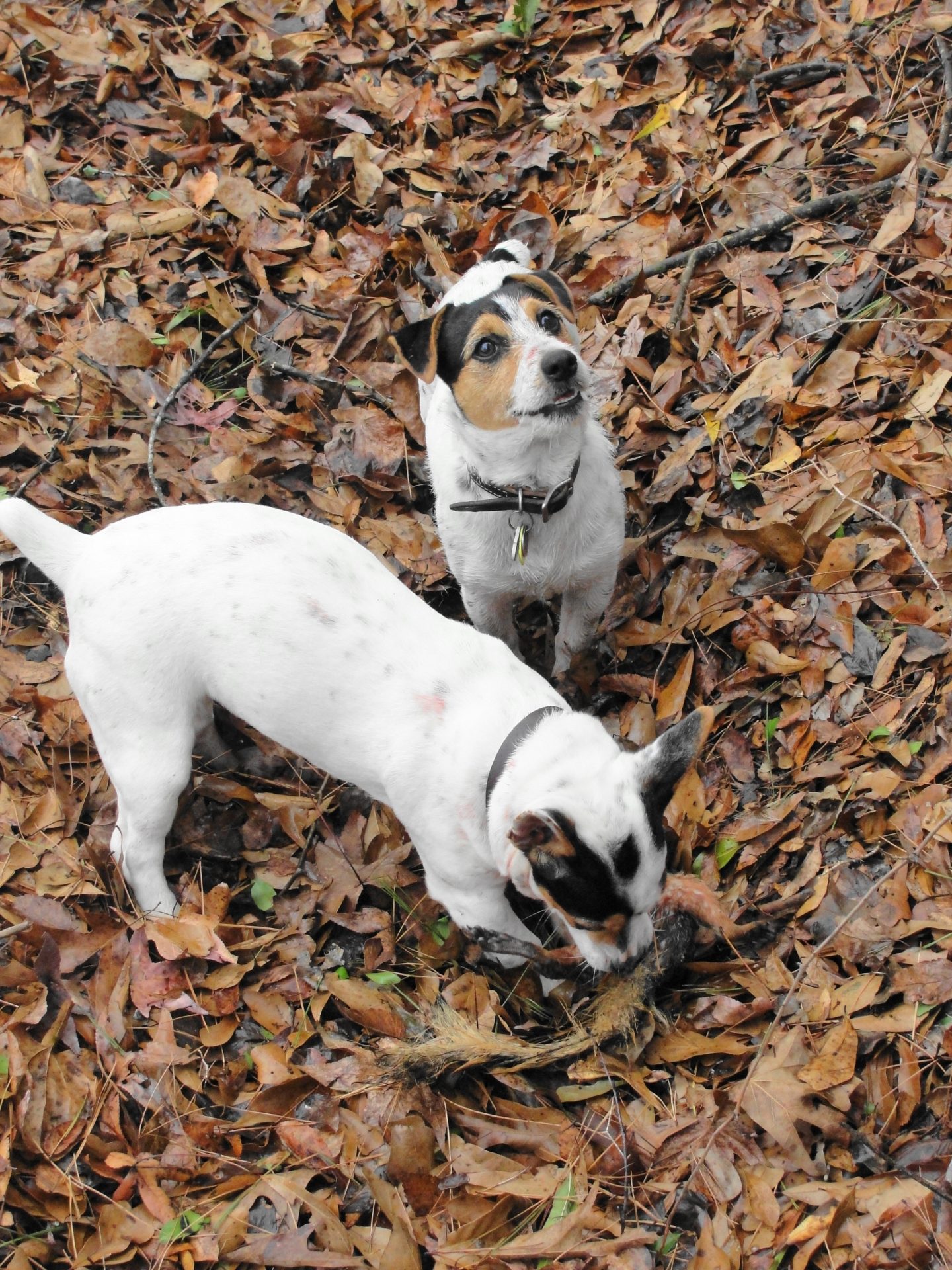 The holiday season has come and gone and our usual month and a half of winter has begun on schedule. My family didn’t make it in until just before New Year’s, so we had a quiet Christmas day in Arcadia. As usual, it mainly consisted of eating. My mom warned my dad and me that she was only cooking two meals that day, but lucky for us, they were two of our favorites. For breakfast, she fried us pork chops with grits and biscuits. My

dad slathered his biscuits with fresh ribbon cane syrup while my mom topped hers off with her homemade mayhaw jelly. I partook of home grown-homemade Meyer lemon marmalade sent to me by friend and fellow Texas Bluebird Society member Linda Crum. She’s quite a gal with talents to spare.

For supper, Momma loaded us up with cornbread chicken and dressing, giblet gravy, zipper cream peas, baked sweet potatoes, rolls, fudge, and peanut brittle. We got a big laugh as I fished the sweet potatoes from our giant compost pile at work where the entire campus grounds crew dumps their organic debris. Technically, they were container grown “ornamental” sweet potatoes (‘Margarita’) but I’m fond of the starchier white fleshed types. She has a showy magenta skin to add to her decorative qualities. I’ve never believed in wasting food. As a matter of fact, all of our table scraps 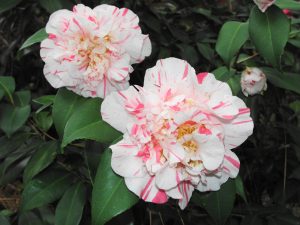 go to my chickens who transform them back into fresh eggs for us. Being from the country, my family has always raised and eaten both yard eggs and yard birds. I’ll always remember my Grandmother Emanis’ chicken and dressing as she nestled the cut-up chicken parts right into the big bowl of baked dressing. My mom uses the same recipe but has gone citified by deboning the chicken ahead of time.

Arcadia chickens always featured parts that The colonel didn’t provide, including the neck, gizzard, heart, liver, lights, pulley bone, saddle back, and boney back – or the “piece that went over the fence last” as my Pappaw called it. We each had two predetermined selections growing up based on an age related draft process. When my first choice came up, I chose the pulley bone. I think this delectable morsel gets included with the breast on store bought pieces today. It always ended with the pulling of the wish bone to see “who would marry first.” Apparently I lost. There weren’t many pieces left for my second selection, so the neck ended up part of my fare as well. I still dine on those two choices today when my mom serves chicken.

On a sadder poultry related note, my popular buff laced Polish rooster, “Little Richard,” was killed by what appeared to be a juvenile red tailed 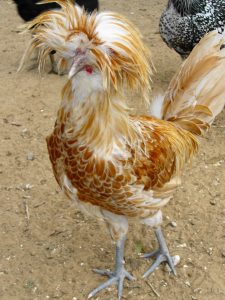 hawk the Sunday before Christmas. I will miss his crowing and the steady stream of questions about what breed he was. The hens will miss their morning social work-out as well.

After Christmas dinner, my mom and I made our annual batch of chewy pecan pralines. It takes hours of cooking and stirring but it’s certainly worth the effort. I first sampled them and picked up the recipe from the Seguin-Guadalupe Valley Pecan Growers booth at the Folk Life Festival in San Antonio years ago. How could one possibly go wrong with a pound of butter, two cups of cream, and six cups of pecans? Since my dad doesn’t like chocolate, we drizzle as many as we can with dark chocolate to keep his consumption in check. He’ll eat anything with pecans in it. As always, the amount folks eat is inversely proportional to the amount of time they spent making them. My mom and I cherish them and try to make them last into the new year. We generally accomplish this by stashing a tin far from gluttonous eyes. The recipe is in my fruit and vegetable book for those that have the patience for candy making. There are somewhat similar “homemade” candies using store bought caramel squares, pecans, and chocolate bark but where’s the satisfaction and sense of accomplishment in that? Besides, I got to watch both the TV and movie versions of the Grinch while working on them.

A new little paperback version of In Greg’s Garden – A Pineywoods Perspective on Gardening, Nature, and Family came out just before Christmas and is available from the Arbor Gate Nursery, texasgardener.com (the publisher), and King’s Nursery in Tenaha. It includes a full ten years of my garden columns from Texas Gardener magazine. It pretty much covers every thought I’ve ever had about gardening.

December started off mild with our typical show of color on the Japanese maples and camellias at the SFA Ruby Mize Azalea Garden. I actually prefer the more harmonious fall show to the eye-popping spring display. The fall color wasn’t as spectacular as last year but still superior to what most in Texas have ever seen. 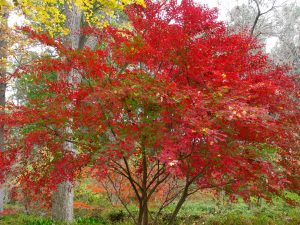 A few days before Christmas found me in my backyard crown tire parterre garden, pulling up frozen tomato and pepper plants. I honestly enjoy a bit of “down time” in the garden as I love plotting and planning what will be planted next. I’ve always relished the plethora of seed catalogs that arrive this time of year as well. Next spring, I plan to plant more Tycoon, BHN 589, Floralina, and Florida 91 tomatoes. We’re still eating the last of the Tycoons from my fall plants. I’ll also put in purple-podded pole beans on my back fence to keep us in “green” beans until the summer heat takes them out. They do turn green when they are cooked. I got my asparagus cut back and pulled up the one dead “Sweet Charlie” strawberry. I planted enough of them that I don’t think the skip will be obvious. I also lost one of my Bababerry raspberry plants. Luckily, I rooted some at work and think Dawn has a few plants in the greenhouse I can pilfer from.

The cold weather bolstered the number of birds at my feeders. Currently, hoards of goldfinches, along with tufted titmice, Carolina chicadees, northern cardinals, and brown headed nuthatches are dining on black oil sunflower seeds while Carolina wrens, pine warblers, chickadees, titmice, and chipping sparrows are gobbling up peanut suet cakes.

The bluebirds are already checking out their nest boxes trying to beat the spring rush I suppose. Linda Crum also sent me several hole restrictors 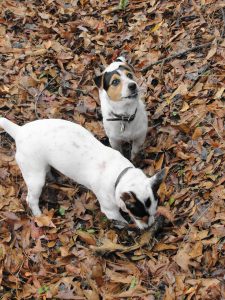 I’m trying to eliminate speaking engagements from the schedule but January finds me in Lake Charles on the 9th, speaking on “Greg Grant Plant Introductions,” in Nacogdoches on the 12th on “Growing a Patch of Sugar Cane for Syrup Making” and at SFA in Nacogdoches on the 19th on “Veggie Gardening 101.” Until next month, read more words and watch the birds. -Greg

Written by Greg Grant Greg Grant is an award-winning horticulturist, conservationist, photographer, and writer from Arcadia, Texas. Each month he writes an article for The Arbor Gate Blog where he is given free range to write about any topic that interests him. During the week, he is the Smith County horticulturist in Tyler for the Texas A&M AgriLife Extension Service and on the weekends, he and his wife tend Greg’s grandparents’ old farmhouse, his Rebel Eloy Emanis Pine Savanna and Bird Sanctuary, a flock of laying hens, four terriers, one German shepherd, and two cats.