The Patron Saint of Critters 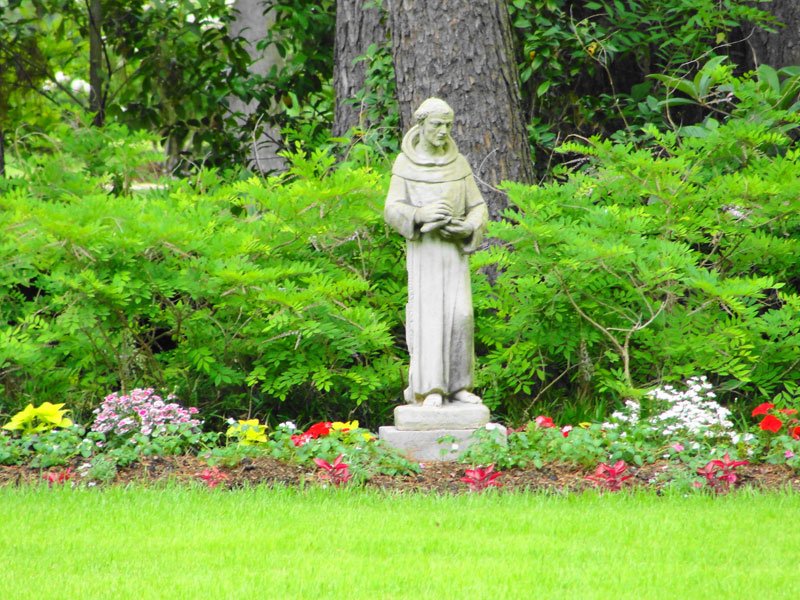 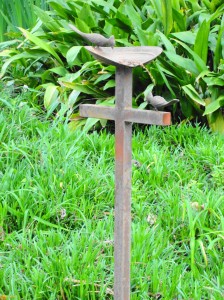 I come from a long line of pretty religious ancestors. My mom’s Spanish Creole Ximenes people were Catholics from Nachitoches, Lousiana. They eventually ended up Anglicized, staunch Missionary Baptist folks in the Pineywoods of deep East Texas. My dad’s people on the other hand held the secretary position in the Arcadia Missionary Baptist Church for generations until my Granny Ruth decided to start a Catholic Church in Shelby County and was of course bounced from the church rolls for “denying the faith.” I not only got my love of flowers from her but my rebellious streak as well. This naturally precludes a saintly disposition for me, but it’s not as far-fetched as it sounds. 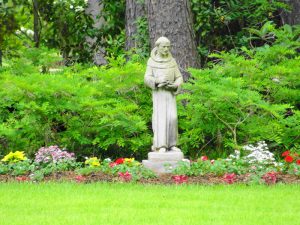 I recently toured a number of wonderful gardens while attending the Southern Garden History Society meeting in Baton Rouge Louisiana (see southerngardenhistory.org). One of the gardens we visited was Miss Sarita’s garden not far from St. Francisville. It wasn’t that much of a surprise to see that her garden had a religious theme and featured a number of crosses and statues of St. Francis. Truthfully I can’t tell you much about very many saints, but I have always had an affection for St. Francis, as I always heard he could talk to the animals.

Of course you know I love plants, but I’m an animal lover as well. My siblings and I grew up with pet dogs, cats, rabbits, chickens, ducks, turtles, possums, raccoons, and even a squirrel. Not just any squirrel mind you, but a house squirrel. At this point you’re probably thinking my mom was the saint. You’ll get over that in due time.

Once while visiting my grandparents in Arcadia, my Papaw told us to go look inside the large metal trash can in the bathroom (one of the few heated rooms in the house) and “pick you out one of ‘em to take home.” Of course the four of us, all a year apart, crammed our way into the small room and carefully removed the lid. Much to our surprise there was a “nest” of baby fox squirrels curled up amid rags in the bottom of the can. He had recently cut down a tree containing a squirrel nest and was apparently too soft hearted to let them perish. Either that or he was going to feed them and fatten them up for the other heated room in the house, the kitchen. He certainly liked to eat squirrel dumplings. We gently picked out one to take home and named him Caleb. Our sweet Caleb was certainly going to have no part in Papaw’s dumplings. 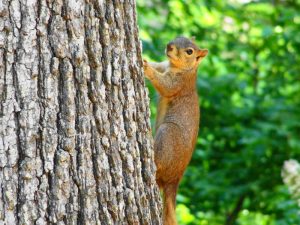 Caleb lived inside our Longview home and grew up to be a happy house squirrel. His favorite activity was racing from curtain rod to curtain rod above the windows. Of course I loved plants as well as animals and was quite proud of a sweet potato vine growing in our own bathroom. I started it from a sweet potato in a jar of water. It had grown so luxuriantly that I trained the vines all around the bathroom mirror. It looked like a scene from one of our books, Where the Wild Things Are.

Once while the whole family was gone, Caleb took a liking to sweet potato greens and ATE the whole botanical display. Of course it didn’t sit well with his nutty little stomach and he developed a serious case of projectile diarrhea, which combined with his love of running around on top of the curtains, DID NOT paint a pretty picture for our arrival home. When we walked into that house and my mother saw the curtains and walls streaked with green she shrieked a few choice non-saintly words, snatched poor Caleb by the tail, and flung him in to the yard, all the while muttering something about @#%^! squirrels living outside.

Of course poor Caleb was a house squirrel, not an outdoor squirrel. He immediately climbed to the top of a large Southern red oak just outside the back door while we children stood in its shadow and sobbed. Well along comes our loud-mouthed state bird, startling Caleb so much that the helpless thing falls from the top of the tree to the ground in front of our wet, red eyes. I’ve seen many fox squirrels jump from tall trees to the ground and run away completely unscathed but not our dear Caleb. He died right there in front of us while we all shrieked and blamed our never to be a saint mother! In her defense, she was talking to the animal, as she THREW him out the back patio door!

I guess the Caleb episode is one reason I’ve spent my life loving and helping animals. Ironically, I’m particularly fond of birds. Once I rode all the way to College Station with a fully grown great horned owl in the Honda Civic with me. I was hoping to get his wounded wing repaired. That’s another story however. 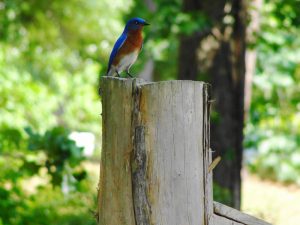 Recently while watering my new little cottage garden with the only sprinkler system I have, the end of a hose, a little ruby throated hummingbird flew a few feet from me and proceeded to take a bath in my garden shower. He splashed and drank and then landed on the double loop wire fencing next to my left arm while he dried and preened. 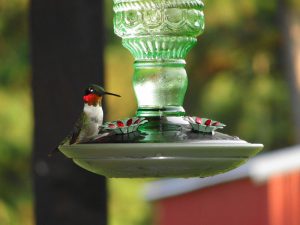 I was stunned and amazed by the little fellow. But the show continued as three more hummingbirds did likewise. I felt like St. Francis, or at least Dr. Doolittle.
Whether they understand me or not, I do talk to the animals. I have at least a daily conversation with one of my beloved bluebirds. If not good for them, it’s certainly good for me. There’s certainly no salve like the wonder of nature.