Somewhere over the Rainbow… 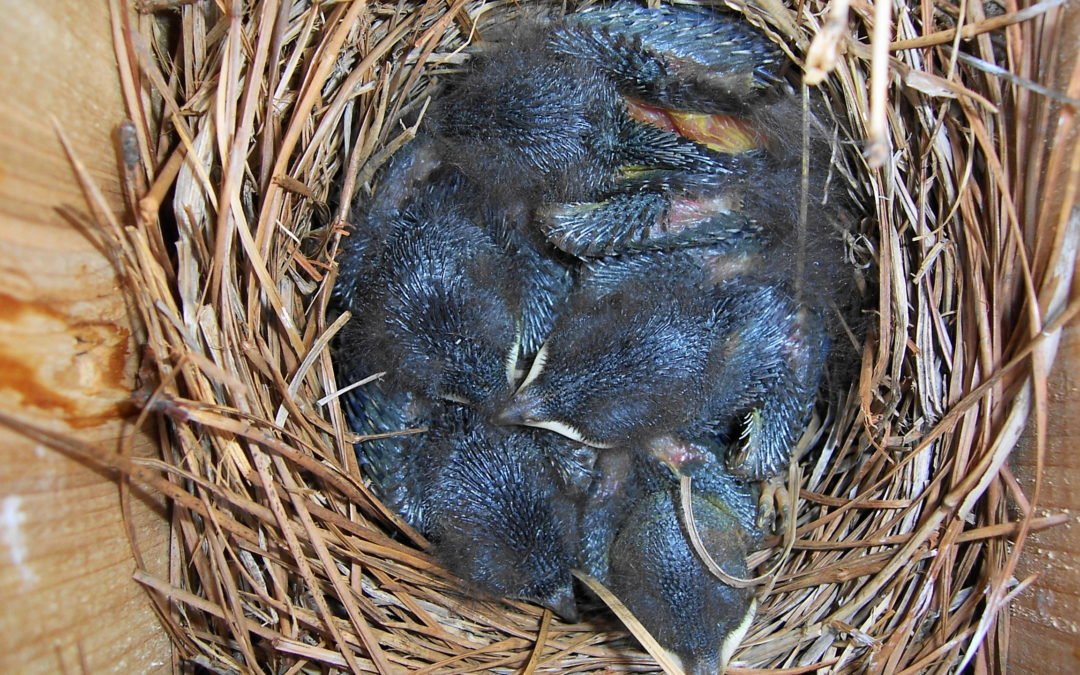 Among many other things, springtime means bluebirds in Texas and much of the U.S. Thankfully there’s not a day that goes by that I don’t hear the gentle warble of bluebirds either at home or at work. 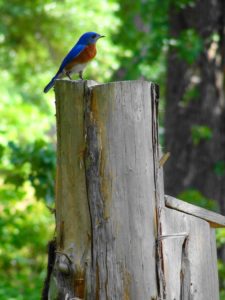 Thanks to their beauty, pleasant disposition, and sweet warbling, bluebirds have been beloved since humans first laid eyes and ears on them. In his 1871 classic, Wake Robin, famous naturalist and birder John Burroughs wrote, “The bluebird is a bird without fault. In my bird heaven the bluebird shall occupy the nearest porch and shall always comfort me with his gentleness and composure.” I feel the same way. After all, the bluebird is considered “the songbird of happiness” and is the state bird of Idaho, Missouri, Nevada, and New York. 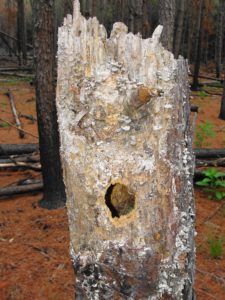 and white belly, while the female has the same colors but with a faded grayish blue. Burroughs appropriately added that the Eastern bluebird “carried the sky on its back and the earth on its breast.” A few lucky folks in the middle of the state may get to see two species in the same area. I only have eastern bluebirds at my farm, but I’ve got plenty of them. Although Wills Point is officially the bluebird capital of Texas, I’m pretty sure that the heaviest concentration of Eastern bluebirds is in Deep East Texas.

Unfortunately bluebird numbers declined dramatically in the early 1900’s, so much so that many feared their impending extinction. Bluebirds are secondary cavity dwellers. This means that they naturally nest in cavities in trees, especially those created by woodpeckers which are primary cavity dwellers. Therefore, in nature, bluebirds need to have old, dying, and dead trees with either natural cavities in them or cavities excavated by woodpeckers. Remember this the next time you decide to cut down a dead tree. East Texas was originally home to nine species of woodpeckers. Sadly, when the eastern forests were completely harvested in the early 1900’s, this eliminated potential cavities for both woodpeckers and the many secondary cavity dwellers including chickadees, titmice, wrens, nuthatches, great crested flycatchers, purple martins, American kestrels, owls, wood 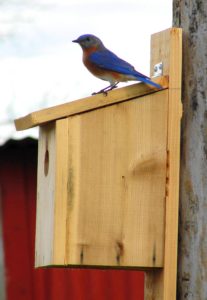 ducks, flying squirrels, and bluebirds. Woodpeckers have to have dying and dead trees for both foraging and excavating nesting and roosting cavities. When these mature forests were replaced by new forests that are harvested on a short rotation cycle, cavity dwellers literally got the short end of the stick. It’s no wonder that the ivory billed woodpecker and Carolina parakeet (both cavity dwellers) are now extinct with the red cockaded woodpecker being an endangered species. In nature, dead trees are equally as important as live trees. Lead dead trees live!

Luckily, those that loved bluebirds came to their rescue by creating nest boxes that mimicked natural woodpecker cavities. These nest boxes have holes that are 1 ½ inches in diameter which are the perfect size for bluebirds. Smaller holes cater to diminutive birds like titmice and nuthatches, preventing bluebirds from entering. Larger holes invite bigger birds like the exotic invasive European starling and European house sparrow. As a lifetime member of the Texas Bluebird Society, I’ve done my part by erecting well over one hundred bluebird houses on family property in the rural countryside. Projects with numerous nest boxes like this are called bluebird trails. Thanks to bluebird nest boxes being placed all over the country, the bluebird numbers have now increased and stabilized. Purple martins have enjoyed the same success story thanks to caring bird lovers across the land.

It takes more than nest boxes and dead trees to attract and raise bluebirds however. Like all wild animals, bluebirds need food, water, and shelter. Before getting carried 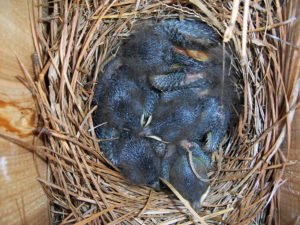 away, it’s important to know that bluebirds are country birds, not city dwellers (although I do have them at the office in downtown Tyler). They prefer wide open spaces like pastures, golf courses, parks, vacant lots, large lawn, and cemeteries, not neighborhoods and cities packed with houses, buildings, or trees. You can also put the bird seed away, because bluebirds are insect and berry eaters not seed eaters. This means you need to lay off the insecticides and let the birds do the work for you. The adults, as well as their young, all feed on insects during the growing season supplemented by small fruits and berries during the winter. Some of the best berried plants for attracting bluebirds are blueberries, Carolina snailseed, dogwoods, elderberries, hollies, pokeweed, rattan vine, red cedar, smilax, viburnums, Virginia creeper, and wax myrtle. Make sure and put a bird bath out for them in the summer and keep your cats away from them as they are the number one killer of songbirds in America.

Because of information they’ve read from the North, many are under the impression that bluebirds are migrants here, returning each spring from winters abroad. Although true for the North, it certainly isn’t true here. Bluebirds are year round residents in East Texas, which means they need food, shelter, and water year round. They have the potential to raise up to three broods a year here too. It’s amusing to watch the parents trying to wean their first batch while starting a new nest and family. The grown children make quite 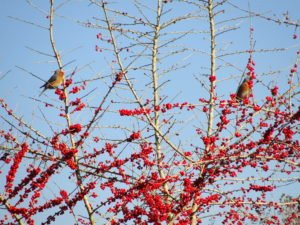 a racket trying to attract their parent’s attention with animated gestures saying, “Feed me! Feed me now!”

One reason East Texas has so many bluebirds is there are both open areas for foraging and nesting, and forested areas full of insects and berries. The margins of woods are great places for birds as they can partake of the many insects in the open areas and the shelter, shade, and fruit of the woodland areas. If you have a choice when placing a bluebird nesting box however, always choose the most open area you can find. Those boxes placed near wooded areas generally end up with equally cute Carolina chickadees, tufted titmice, or nocturnal flying squirrels. You’ve never had your heart truly kick into high gear until you’ve opened up a box full of excited flying squirrels! Just make sure the nest boxes you put up can be opened so old nests can be removed. Bluebirds like clean houses. Nest boxes are best erected before Valentine’s Day. But anytime is better than not at all, as they are always in search of new homes. -Greg