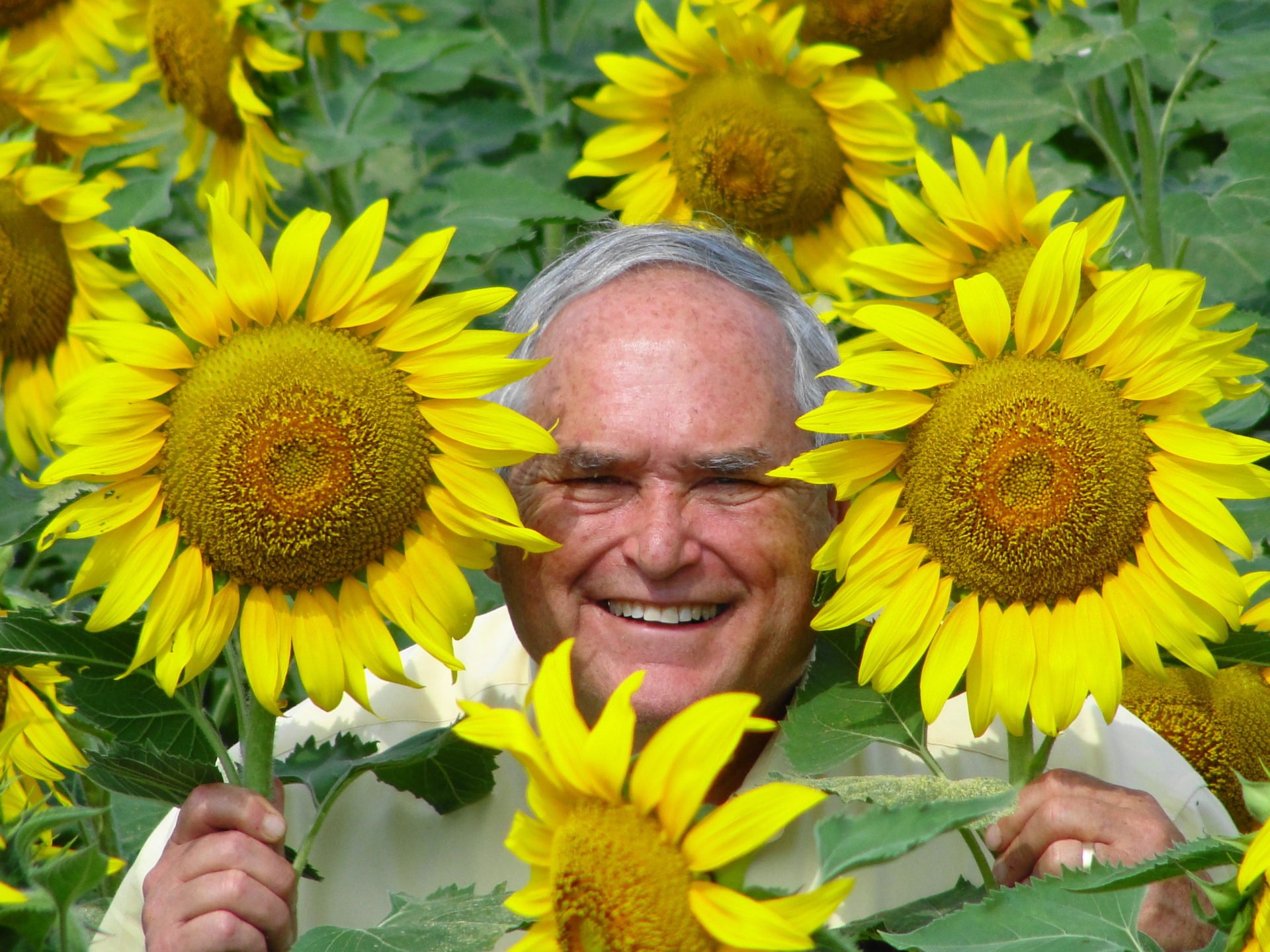 Every year of one’s life seems to bring another novel experience; some good and some bad.  My latest new experience was my very first earthquake.  Shelby County (near the Timpson area) actually felt four earthquakes this month.   I missed the first one as I was riding on a tractor pulling a broken bush hog that was doing plenty of quaking itself.  Anything short of a giant crevice opening up in front of me I was sure to miss.  But the one that got my attention was a 4.8 quake at 3:12 in the morning on May 17.

I’ve learned to gage the wind speed by the sound of the rattle in my old windows.  When a cold front blows through and the winds get 30 mph, they talk to me.  Of course I also learned during hurricanes Rita and Ike when the wind blows 60 mph they yell at me.  Well imagine what I was thinking when suddenly the windows were rattling worse than a hurricane!  All I could figure was that a freak tornado was going to take Dorothy, Toto, and I for a ride.  Lying in bed on four wooden legs in an old pier and beam house of course adds to the whole experience.  My whole house danced for about 20 seconds, then all was calm.  Needless to say, I didn’t stay put but “sprang from the bed to see what was the matter.”  No tornado, no wind, no rain.  I did have to straighten all the pictures on the wall and put the lid back up on the old Chambers stove.  Folks in all the surrounding towns (Center, Tenaha, Shelbyville, Garrison, San Augustine, and Nacogdoches) all got to experience it as well.  My late cousin Ruben Smith once told me there was an earthquake in Arcadia years ago.  I should have paid more attention.  Apparently East Texas gets them every 50 years or so.  Unfortunately I don’t think we are supposed to get them in rapid fire succession.  Nobody has any proof at this point, but the many salt water injection wells in the area sure seem suspicious. 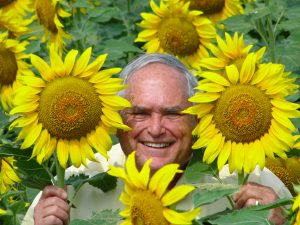 May is of course a busy month in the garden and on the road.  I started the month by heading to Austin, touring Zilker Botanic Garden, and doing a radio interview for Cecilia Nasti’s Field and Feast program about my new veggie book.   From there I headed to San Antonio and gave a couple of talks at the state Master Gardener convention.  I got to see lots of old friends including Jerry Parsons, Bill Welch, and Felder Rushing.  Dr. Parsons and I got to ride around and play for a day like we used to.  He’s posed for hundred of unique pictures for me in the past so of course I had to herd him into a field of sunflowers south of town for one more. The next weekend garden writer Jay White and his wife Sally came to visit me in Arcadia.  Jay is working on his Master’s degree in horticulture at Texas A&M and has a nice blog at masterofhort.com.  Then my perky buddy Linda Crum came and warbled about bluebirds at our monthly SFA Gardens lecture series.  She’s a hoot.  After that, SFA hosted the Lone Star Regional Native Plant Conference.  The programs were outstanding.  I especially enjoyed the “Birding by Ear” tour by friend and Texas Parks and Wildlife ornithologist Cliff Shackelford and the “Urban Wildscaping” talk by his wife Julie.  Julie works in the same building as I do at SFA and his quite the birder and gardener herself.  After that, landscapers Cara and Chris Day from Spring came to tour the gardens at SFA.  They both used to work at Mercer Arboretum in Humble, as did I.  Their truck broke down on the way to the native plant conference so they didn’t get to make it.  On the last weekend of the month I attended a book signing at King’s Nursery in Tenaha and signed quite a few copies of Growing Fruits and Vegetables in Texas and Heirloom Gardening in the South.  Aubrey and Cheryl King (along with their entire family) are dear friends of mine.  I got home just in time to give Arcadia tours to the Cypress Basin and Bowie County Master Gardeners.  Friend, fellow bulb farmer, and bluebird expert extraordinaire Keith Kridler led them down. 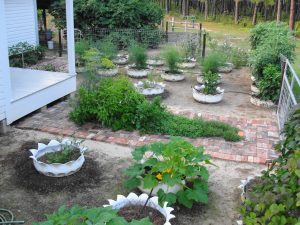 It’s turned off hot and dry in the garden so I got all my drip irrigation hooked up and having been running it along with the occasional sprinkler.  Earlier this spring it was too wet to plow and then my tractor was in the shop.  That meant a late start on my annual Sweet G-90 corn, Burgundy okra, and my purple hull, cream, and blackcrowder peas.  I did manage to get my crown tire parterre kitchen garden finished in the back yard and have been harvesting flat “Italian style” purple podded pole beans, Supersett squash, Diamant pickling cucumbers, Fiesta purple bell peppers, banana peppers, assorted herbs, and BHN 589 tomatoes.  My parents LOVE fresh tomatoes! 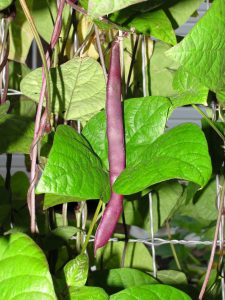 The chickens are still laying nicely so I’ve been peddling seven dozen at the Nacogdoches Farmers Market each Saturday to pay for their feed.  Of course my mom uses lots of them as well.  My oldest nephew Reed talked me into setting some eggs which should hatch off next month, if the snakes don’t get them.  Their mommas will be a fat brown egg laying hen but their daddy is an outlandish Crested Buff Laced Polish.  Those have blue legs and lay white eggs.  There’s no telling what kind motley children this marriage will produce.  Don’t get too attached to them as they’ll probably find their way into to Thanksgiving and Christmas cornbread dressing. 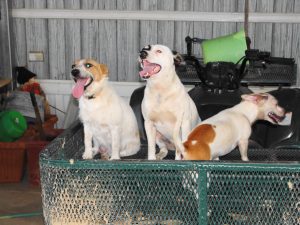 My cousin Don Crawford called today and said he had two one day old Jack Russell puppies if I wanted them, one a boy and one a girl.  There were only two in the litter.  I’m partial to female dogs but told him I’d be right over to look.  Of course I had to run this by my old momma first, as she looks after the dogs when I’m away.  She’s a sucker for incorrigible Jack Russells (having owned as many as four at a time in the past) and gave the OK.  I flew down the old dirt road to the hill next to the dam of Lake Pinkston where Don lives and held both of them in one hand.  Their daddy is a tall smoothed coated fellow and their momma a shorter rough coated gal.  Of course I said I’d take them.  Now what’s going to happen when the two I ordered from another man arrive next year?  Bedlam, that’s what!

Until next month, -Greg