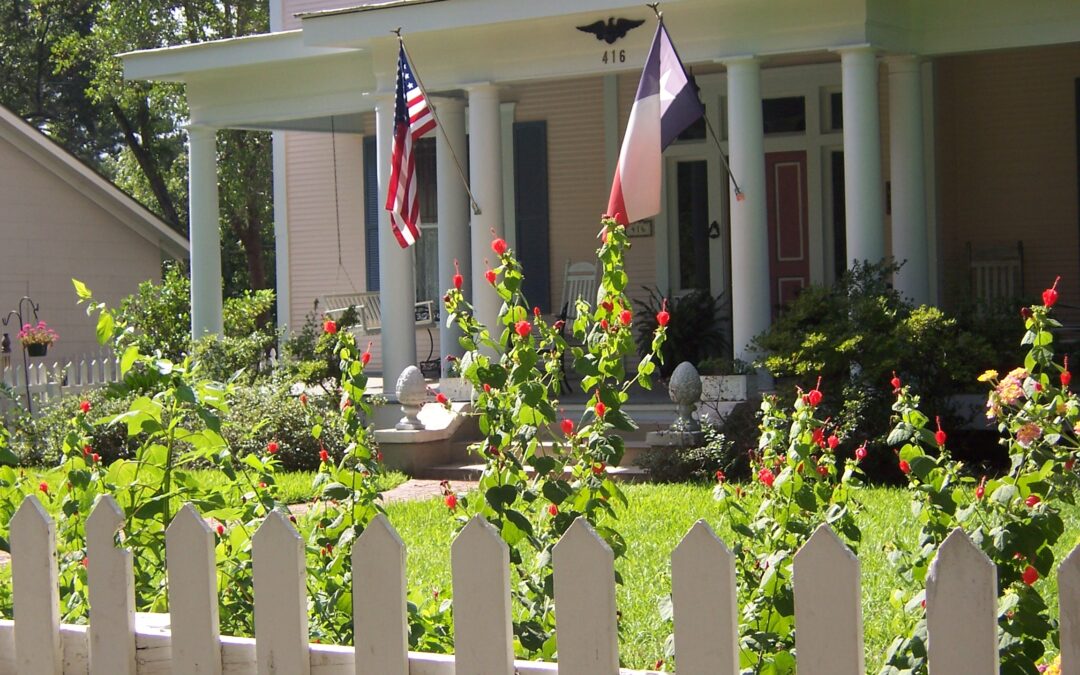 In addition to much anticipated pleasant weather, there are many things to look forward to in a Texas autumn. Among my favorites is the annual super star floral display of 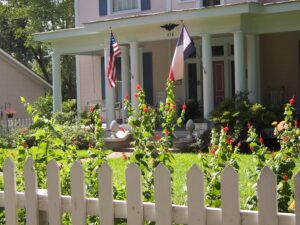 Turk’s cap, a native member of the hibiscus family.

Plants native to the South that were showy and easy to propagate quickly became a part of our ancestor’s gardening palette. One such example is the Turk’s cap (Malvaviscus arboreus drummondii). In an 1891 copy of a Pearfield Nurseries catalog from Frelsburg, Texas, it states, “Malvaviscus drummondii – A native of Texas, producing during summer a profusion of scarlet flowers. 40 cents each.” It doesn’t just produce a profusion of small twisted turban-like flowers, but a multitude of hummingbirds, sulfur 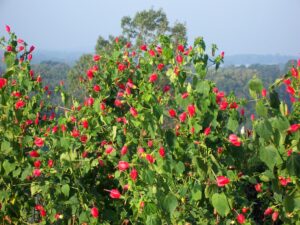 butterflies, and small red-orange fruit as well. I’ve always considered the miniature tomato-looking fruit palatable, but some might disagree. These are the kind of plants my friend Dr. David Creech says are “handy in a famine.” A 1933 Otto M. Locke Nursery catalog from New Braunfels, Texas is on my side however. It lists “Malvaviscus drummondii. This has large broad leaves…and produces a small fruit which some people call Mexican Apples. The fruit is sweet and edible. 10c each, $1.00 per dozen.” Locke Nursery once laid claim to the oldest nursery in Texas, having started in 1856. Unfortunately when Mr. Locke died in 1994, the nursery died with him. It was famous for its animal menagerie, including a prairie dog “town” and for supplying the U.S. with most of its tuberose bulbs. I had the fortunate experience of getting to meet Mr. Otto Locke, Jr. and his wife Etelka when I was the Bexar County horticulturist in nearby San Antonio in the late 1980s. On one visit he told me a man tried to buy the property from him for one million dollars, but he wouldn’t sell it to him because the buyer planned to do away with the nursery. Mr. Locke’s dad, and granddad had owned and operated that nursery and he couldn’t bear the thought of it not being there. Unfortunately the property was immediate adjacent to I-35 in a rapidly developing area. Enough said. Luckily Turk’s cap still grows up and down the nearby Comal and Guadalupe Rivers as a lasting testimony. 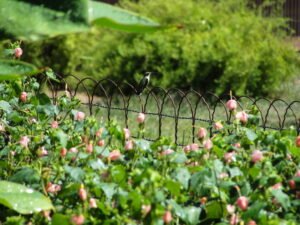 My first experience with Turk’s cap was around the back steps of my friend Kevin Adams’ house on Tryon Road in Longview. His family rented the home from Autry and Marie Daly next door. I would sit on the back steps waiting for him, watching the hummingbirds visit the flowers as I nibbled on the small, sweet fruit. At the time, I feared Mrs. Daly, as I was told she was an evil, mean, old witch. It turned out just the opposite, and she later became my sweetest friend on earth. She loved flowers (and me) and Turk’s cap was just one of her many garden treasures. People are like plants. Most all are good. You just have to get to know them and know what’s good about them.

Thanks to prodding early in my career by the late Navasota rosarian, historian, and queen of the eclectic, Pam Puryear, I began a breeding project with Turk’s cap when I started teaching horticulture at Stephen F. Austin State University years ago. I first crossed a pink-flowered, tropical Malvaviscus arboreus with a red flowered Malvaviscus drumondii. The intent was to transfer the larger flowers from the tropical species to the more cold-hardy, but smaller flowered Turk’s cap. Unfortunately, 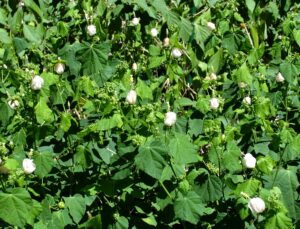 a big rat in the greenhouse ate most of my seed bearing fruit. After hiring a student with a BB gun, I managed to salvage only one fruit and then only two seeds germinated. One plant was a dwarf, fuzzy-leafed Turk’s cap look-alike, but the other was a perfect intermediate cross with attributes of both species. I named it ‘Big Momma’ after my paternal great grandmother (“Miss Dee” Smith) and because it also became the mother of my next introduction. I used a white Malvaviscus drummondii as the pollen parent to produce the salmon-pink flowered ‘Pam Puryear.’ I eventually went on to introduce ‘White Lightning’ (a more vigorous white), ‘Missy Puryear’ (a soft pink), ‘Red Hot’ (a spreading red with larger flowers), and ‘Sweet Lips’ (a bicolor).

Though often derided by snooty gardeners as a common “weed,” I beg to differ. After all, Turk’s cap will grown in sun or shade, wet or dry, acid or alkaline soils, is resistant to deer and glyphosate herbicide, attracts swarms of hummingbirds and sulfur butterflies, has edible fruit, and is native. Does that sound like a bad plant to you? The days of 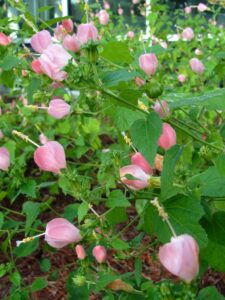 not wanting plants because they are easy to grow should end. Only a gardening fool would fill their yard with plants craving water, fertilizer, pesticides, and attention. Viva la revoluciὀn!

Like many pass-along plants, Turk’s cap has garnered a number of other names as well including wax mallow, sleepy mallow, Turk’s turban, ladies ear drops, Scotchman’s purse, and wild fuchsia. When I was the County Horticulturist in Cherokee County, Texas the local ladies called it “bleeding heart.” My heart certainly bleeds for it.