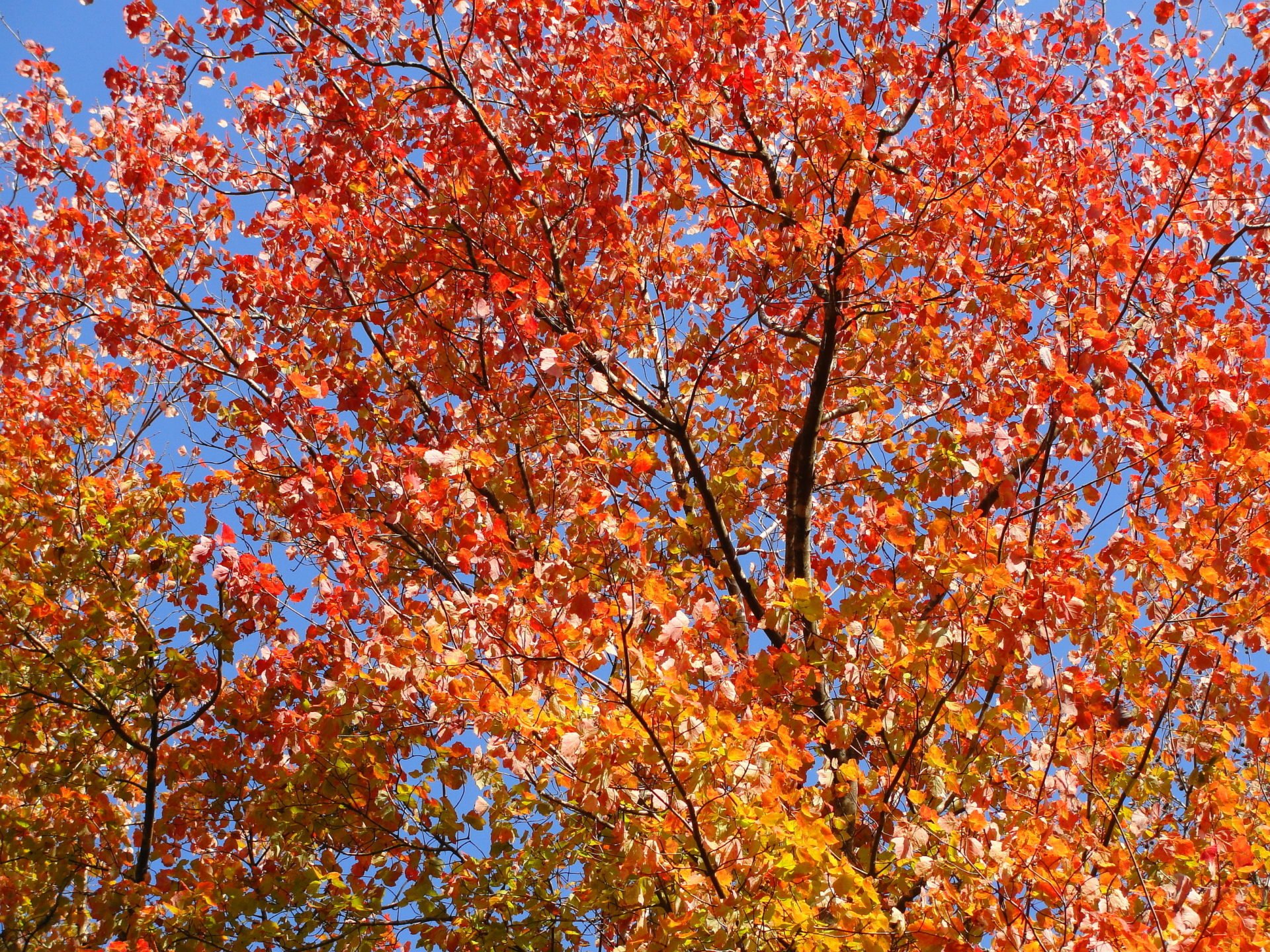 I took the week of Thanksgiving off and spent a portion of it adding more maples to my “maple walk” around my 8-acre Rebel Eloy Emanis Pine Savanna and Bird Sanctuary. My 10-acre Trillium Woods are full of butter-hued native southern sugar maples (Acer barbatum/Acer floridanum) so I’m trying to line the edge with the more red and orange tones of chalk maples (Acer leucoderme). I only have a few native trilobed red maples (Acer rubrum trilobum) on the property so I also added a few along the ravines so their hopefully fiery hues will stand out against the more subdued sugar maples. I love “woodscaping” and have seemingly always been in love with maples. I don’t know if I was adopted from Canada or if it’s their color, form, and shape, but I’d certainly be lost without them. Here’s a list to choose from in Texas.

Bigtooth Maple (Acer grandidentatum): Bigtooth maples are essentially northern sugar maples that were trapped in a hotter, drier, more alkaline setting. They still benefit from regular moisture during the summer, as their streamside habitat indicates. Though not always showy, bigtooth maples can sport foliage of yellows through oranges and reds during the fall. They are hard to locate in the nursery trade but are worth the search. Visit the “Lost Maples” area of the Texas Hill Country for a special treat and to see these guys in their native habitat.

Boxelder (Acer negundo): This native “maple” is common along streams and fence rows in much of Texas. It’s our only maple with compound foliage. Unfortunately it has little to offer to Texas gardeners, with a short life span, almost no fall color, and foliage that is prone to burning and falling throughout the year. It also has weak wood and narrow branching which means they are prone to collapsing during storms and old age.

Caddo Maple (Acer saccharum “Caddo”): The Caddo maple is a special form of sugar maple that is native to southern Oklahoma. It is much more adapted to the drier, more alkaline parts of Texas than the northern sugar maple which won’t survive the summers in Texas. With decent soil and some summer irrigation it can make a medium sized shade tree with attractive golden or peachy fall color. It’s difficult to find in the nursery trade but worth the search as well. 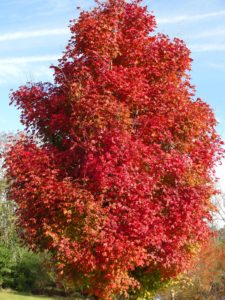 Chalk Maple (Acer leucoderme): This rare native of deep East Texas provides the best fall color of our native “sugar maples.” Its autumn hues generally range in the orange to red range, colors generally reserved for red maples and Japanese maples. Being native to the southeastern U.S., it prefers acid, well-drained soils and regular moisture during dry summers. It’s typically a small understory tree. It too is rather rare in commerce but can occasionally be purchased from specialty nurseries dealing in native Texas plants. 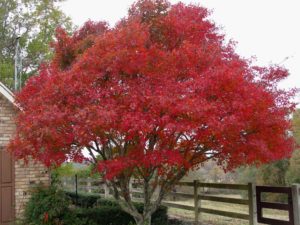 Japanese Maple (Acer palmatum): Japanese maples are one of the most popular small ornamental trees in the entire world. Though they prefer the acid soils of East Texas with regular moisture, they are grown throughout the state as picturesque small trees in partly shaded environs. They can also be grown in large containers with regular irrigation. There are literally hundreds of cultivars to choose from. The grafted burgundy leafed, weeping, and cut leafed types are the most popular but the standard green leafed species from seed is the easiest to grow. The best collection of Japanese maples in the state can be found at SFA Gardens in Nacogdoches, which boasts over one hundred different cultivars. The Dallas Arboretum has also assembled an impressive collection.

Mexican Sugar Maple (Acer skutchii): This is the rarest sugar maple in North America. It was stranded thousands of years ago in Mexico and Guatemala, where it naturally developed heat tolerance. Of all the “southern” sugar maples, it looks the most like what we see on the Canadian flag. It has very large, winged samaras (seed), yellow to occasionally peachy fall color, and appears to be alkaline tolerant. It virtually doesn’t exist in the trade right now but hopefully will one day. 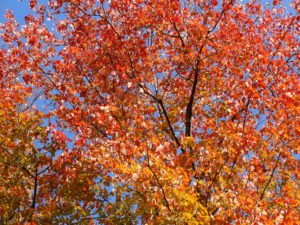 Red Maple (Acer rubrum): When you admire the beautiful shots of spectacular fall color in New England, it’s normally the red maples that are putting on the most spectacular show. The species name “rubrum” hints at what’s in store. Red maple is a fairly common native in the woodlands of East Texas providing pockets of autumn color ranging from yellow through orange and red. It makes a medium sized shade tree. Acer rubrum drummondii (swamp red maple) is more common in southeast Texas and sports velvety white undersides to its leaves. Though it has showier blooms in the spring, sometimes rivaling redbuds, it is known for less spectacular fall color. Acer rubrum trilobum (trilobed red maple) is more common in the rest of East Texas and sports smaller, three lobed leaves with smooth, white undersides. 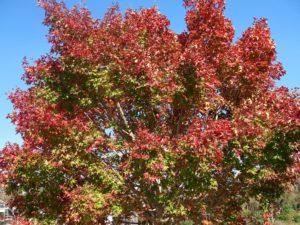 Shantung Maple (Acer truncatum): I first saw this Chinese maple years ago at a test garden at Kansas State University with Dr. Steve George and Dr. Jerry Parsons, where it was the only maple that didn’t have burned and tattered foliage in the full sun during the summer. It has since been designated a Texas Superstar due to its adaptability to the majority of Texas. Shantung maple provides a similar delicate appearance as that of a Japanese maple but with a much tougher constitution. The new leaves appear in the spring with a maroon or orange cast, turn shiny green for summer, and then shades of yellow, orange, red, or burgundy in the fall. It makes a small to medium sized tree and will grow in sun or part shade. I also added the screaming red ‘Fire Dragon’ from Metro Maples to my collection this fall.

Silver Maple (Acer saccharinum): Though widely planted in Texas, silver maple is one of our least desirable maples. It does best with acidic, well drained soils and regular moisture to keep its foliage from turning chlorotic and burned. Silver maple produces very little fall color in Texas and has weak wood and narrow branching angles that lead to broken limbs. It generally has a short lifespan here. Its hybrids with red maple (Acer x freemanii) do provide nice fall color however. 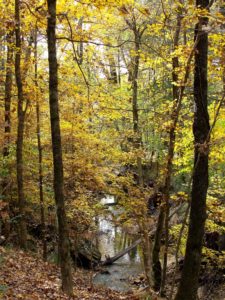 Southern Sugar Maple (Acer barbatum/Acer floridanum): In my area of deep East Texas, southern sugar maples are one of the dominant trees along the woodland streams. Sometimes known as Florida sugar maple, it is a more heat and drought tolerant descendant of the northern sugar maple. It is best adapted to acid, well-drained soils with regular irrigation and can grow into a medium sized shade tree. Southern sugar maples generally turn golden yellow in the fall with blushes of peach during ideal years. Like all trees grown from seed, each seedling can be different. It too is uncommon in the trade but occasionally available from nurseries specializing in native plants.

Trident Maple (Acer buergerianum): Another Chinese maple, this one has smallish three lobed leaves and unusual exfoliating bark. Although more adapted to the acidic soils of East Texas, it has been grown with some success in the Dallas-Fort Worth area. It’s a healthy small to medium sized tree that typically turns orange to red each fall.

The best maple viewing in the state is probably at the Stephen F. Austin State University Ruby M. Mize Azalea Garden in Nacogdoches in late November and early December each year depending on the weather. You are probably too late this year but put it on your calendar for next year. Our Tyler Botanical Garden Shade Garden is also worth a visit as is the Dallas Arboretum, the Fort Worth Botanical Garden Japanese Garden, and the Lost Maples State Natural Area. -Greg