Lillies of the Field 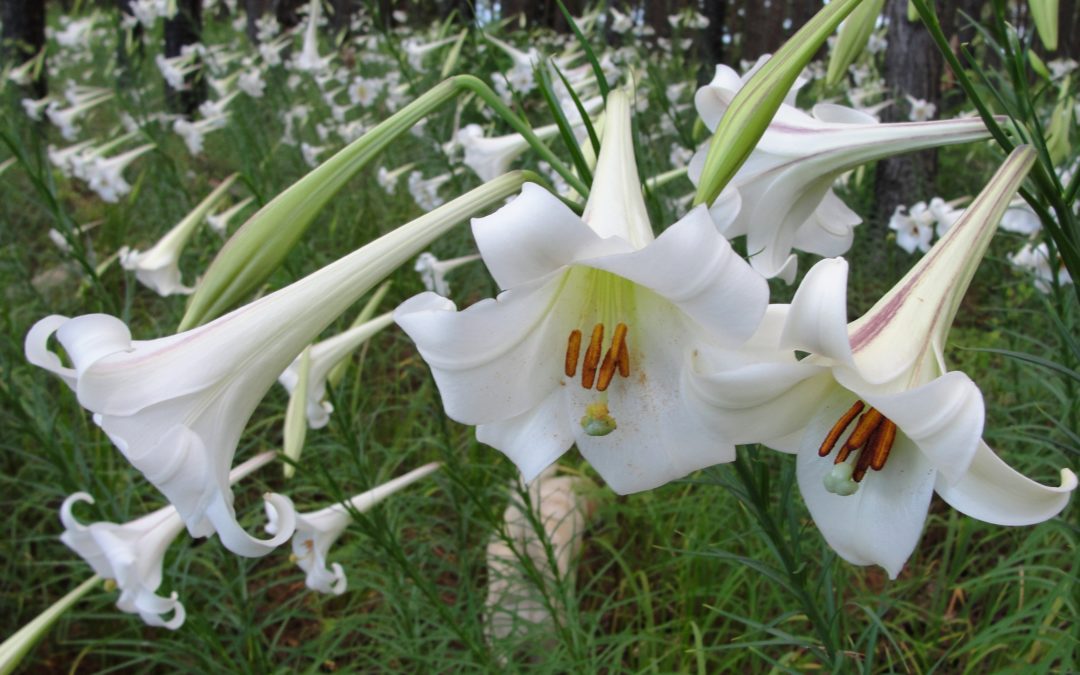 I seem to have been born in love with “lilies.” From the time I hit the ground growing, it was love at first sight with canna lilies, crinum lilies, daylilies, Lent lilies, rainlilies, spider lilies, St. Joseph’s lilies, and their geophytic kin. 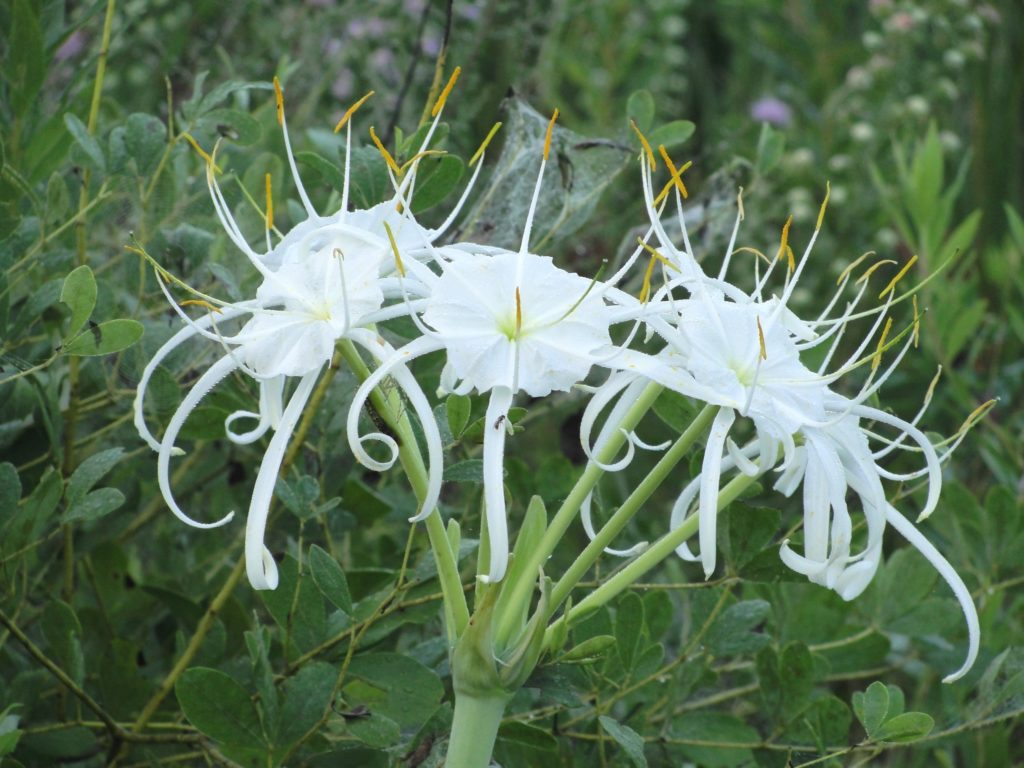 It turns out however, that none of my childhood loves were true lilies. Most of the lily imposters that I still love to this day are in the Amaryllis family. To be a true lily in the Liliaceae, one has to be in the genus Lilium and have a superior ovary, which means the seed pod occurs above the location where the flower petals are inserted. The amaryllis (Amaryllidaceae) family has seed pods below the flower petals.

Who cares, right? A lily by any other name would smell as sweet. There are only a few true lilies that grow well in the South; tiger lilies, Easter lilies, and Philippine (Formosa) lilies. Here’s how I got started with the latter. 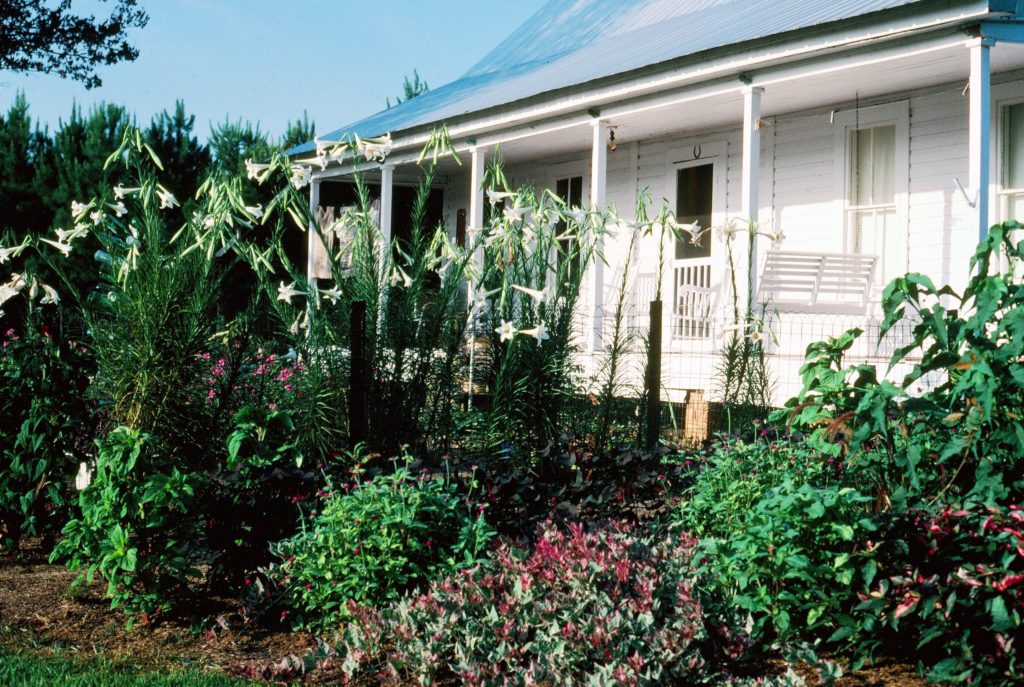 Years ago while driving home from college at Texas A&M University late one summer, I spied what seemed like thousands of tall “Easter” lilies surrounding a small white cottage in the Arlam Community of nearby Rusk County. As a natural born horticulturist and current horticulture student, I had to know more about them, so I turned around and went back.

I recall to this day thinking it was the prettiest site I had ever seen and that it didn’t seem real. To get into the “yard” I had to push lilies aside with the gate. After knocking on the door, a very small woman answered, and after accepting my praises and telling me about them, went to the back of the house and brought me a bread sack full of seed. I remember then and there thinking I wouldn’t stop until I had as many lilies and she did. Sadly this was before I owned a camera and before I knew to document everybody’s name and story. 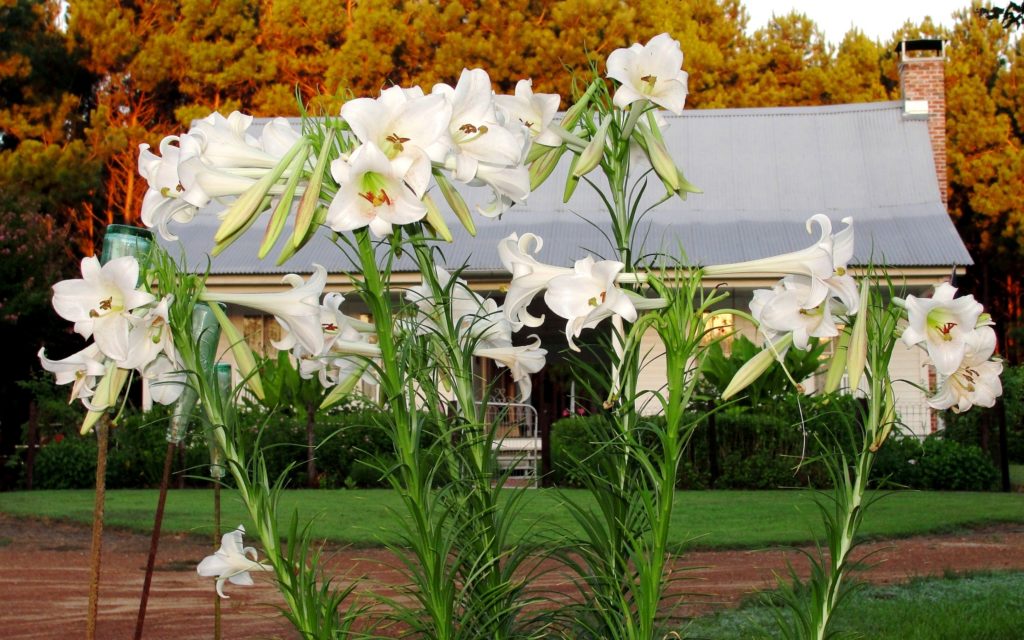 It wasn’t until a trip to South Carolina for an Extension Triennial Conference with Dr. Jerry Parsons and Dr. Steve George in the late 1990s, and a visit to Goodness Grows Nursery in Georgia along the way, that I learned that they were called “Philippine lilies.” This made sense because I remembered the little lady from Arlam mentioning the Philippines and her son bringing her the seed.

Fast forward to a trip to Keith Kridler’s bulb farm in Mt. Pleasant Texas one year when a lady there mentioned she was from Arlam! I told her my story and she said she would be going through Rusk County that weekend and if I’d mark the location she’d tell me the ladies name. So I did and the story got convoluted. The long gone homeplace belonged to a Miss Christine Langston and she was never married, never had a son, and never knew anybody in the Philippines! Well good grief. I hate when my stories don’t line up. I swear that women told me her son brought them to her from the Philippines. Perhaps it was somebody else’s son. Or even better…she had a son in the Philippines that nobody knew about, except me! I made the mistake of telling my Cajun that it was a Texan’s birthright to lie, for educational and entertainment purposes, and will never hear the end of it.

Miss Langston’s lilies lingered for years, first in the woods where her house was, then only along the roadside and edge of the woods. I remember being horrified one year driving through as the highway mowing crew slay them. Now, no one but me knows there was ever a house, a garden, or a lily there. 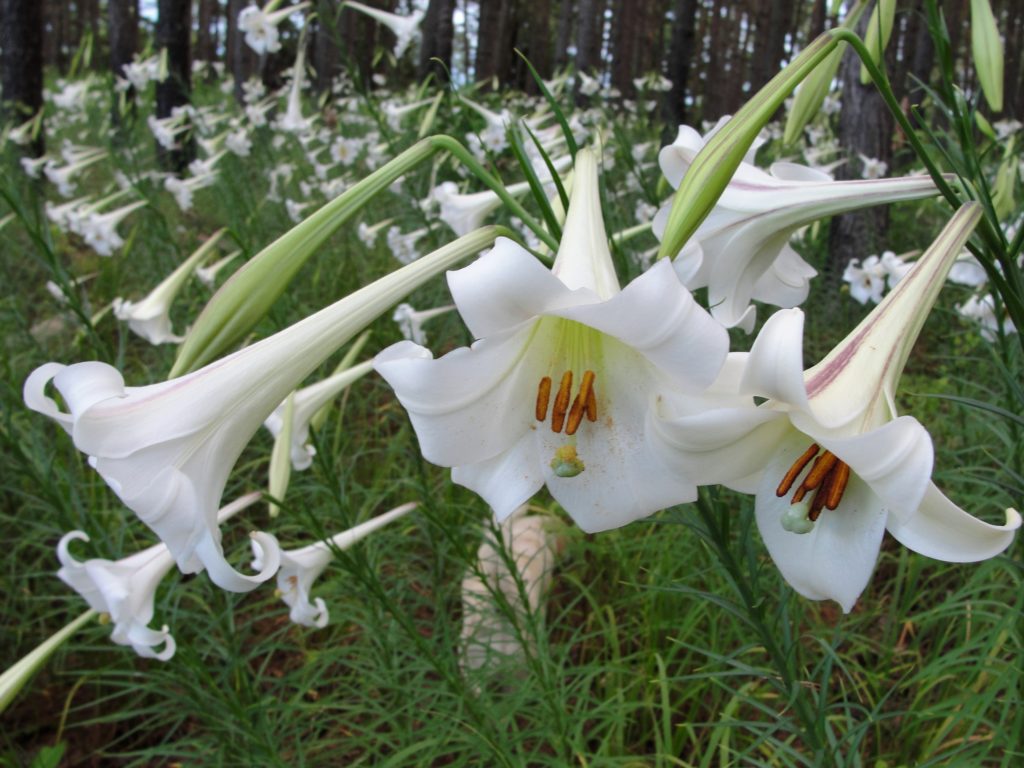 But like many a sweet gardener in my life, she shared her plants with me. I started with a few in the garden then later a few in my perennial border. Lilium formosanum is considered the only lily that can go from seed to flower in one year and I’ve always anxiously watched each seedling to test the theory. The seeds are light as a feather and blow hither and yonder on the winter winds. One year a clump showed up by the culvert under my front drive.

Thanks to me dumping garden debris along the edge of my pine forest, Miss Langston’s lilies eventually ended up out back where I thought my annual controlled burn would kill all but those on the very margin. Boy was I wrong. It is well documented that regular fires control woody vines, shrubs, and harwood trees and encourage pines and warm season perennials and grasses. Well, I’m here to tell you that fire also encourages Philippine lilies because I finally have as many as Miss Langston did. 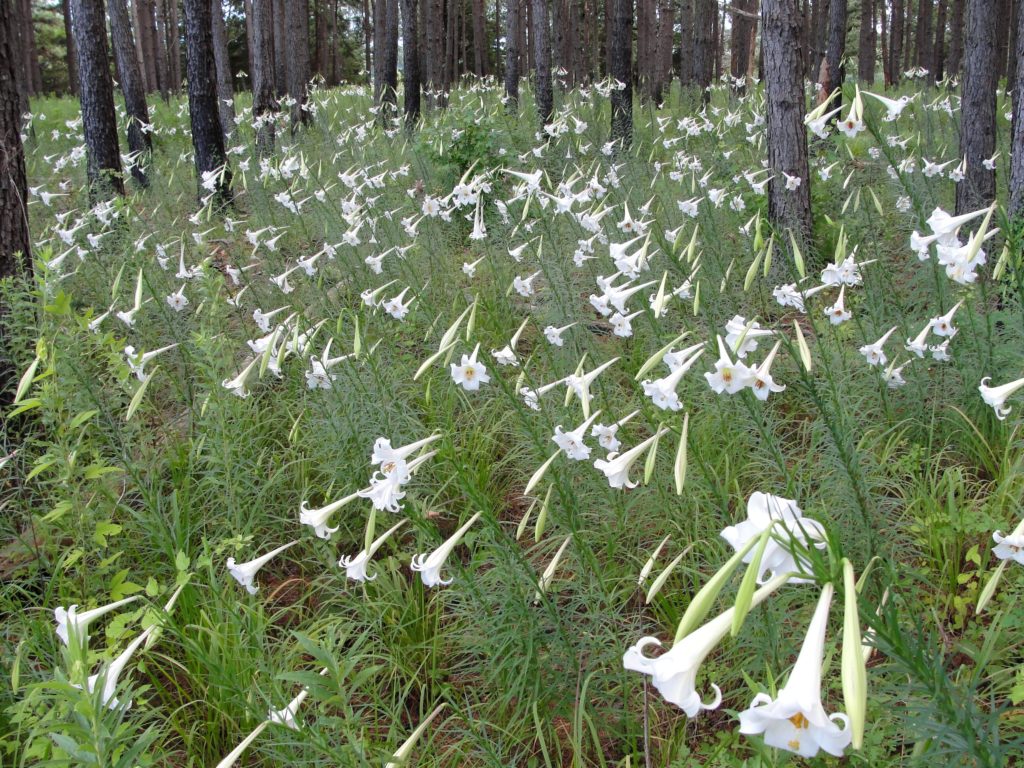 I have what was supposed to be a hard and fast rule of allowing no non-native plants into my Rebel Eloy Emanis Pine Savanna and Bird Sanctuary but it turns out that I don’t have the heart to harm one stamen on Miss Langston’s lilies. Although a fairly vigorous reseeder and knowing several spots where they are lightly naturalized including a home and fence row not too far from Arlam, I don’t consider them an invasive exotic (plants that spread ad nauseam, taking over ecosystems). However, as a lifetime member of the Native Plant Society of Texas, I suppose I’ll just have to grow comfortable being embarrassed when I eventually have 8 acres of Philippine lilies. I can always lie about how they got there.