What a month June was!  It started out with a trip to Richmond, Virginia for the annual meeting of the Southern Garden History Society.  Bill Welch and I both serve on the board and went early for a board meeting and dinner.  The general meeting was held at the beautiful, historic Hotel Jefferson and was very educational as always.  But as good as the meetings are; they don’t hold a candle to the tours.  As usual, we got personal showings of both public and private gardens including the state capitol and grounds, Hollywood Cemetery, Lewis Ginter Botanic Garden, and Thomas Jefferson’s boyhood home, Tuckahoe.  If you like the idea of combining history, education, and beautification, you should join this wonderful group.  Next year’s meeting will be in Lynchburg, Virginia, followed by Savanna, Georgia in 2014.  Check out their website at southergardenhistory.org. 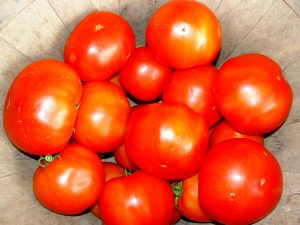 Thanks to wet soil and a broken little blue Ford tractor I was late getting my rows of field crops in this year.  It’s now hard to remember the soil being too wet to plant.  Luckily I had my little backyard crown tire parterre kitchen garden to fall back on.  It’s amazing how much produce you can harvest from simple homemade tire planters half full of potting soil.  Of course high fertility and drip irrigation are the keys.  I only planted three tomato plants this year but they certainly earned their keep.  I picked each plant every third day and have harvested a half of beautiful tomatoes each day the last week of June.  My family loves fresh tomatoes.  I like to freeze the extras for tomato sauce while my mom uses them for soups.  This year I went with BHN 589, Floralina, and Florida 91.  I normally include Park’s Whopper and Celebrity but only had three spots available.  I wanted to add Tycoon but couldn’t lay hands on any transplants this spring.  My friend and tomato expert, Jerry Parsons, brought me some Tycoon transplants for the fall however.  Dr. Parsons conducted the Texas A&M tomato trials in San Antonio for 30 years and always has the latest greatest varieties to play with.  Here, you have to get fall tomatoes planted the first two weeks of July for ripe tomatoes before frost.  In South Texas you can plant them the last two weeks of July.  Anything past that, you can expect fried green tomatoes for Thanksgiving.  Of course finding tomato transplants this time of year is often problematic.  Growing them right now is no piece of cake either.  They can take the heat and the sun but certainly not being dry.  That means diligent irrigation is the limiting factor in fall tomato production.  The good news is, unlike spring planted tomatoes, the conditions for fall tomatoes get better and better as fall approaches.  They also ripen slower with the cooler temperatures of fall.  The important thing is to get a nice healthy plant full of blooms ready to set fruit when the temperatures start to moderate.  Trying to carry spring tomato plants through the summer generally nets more spider mites, virus, and foliage diseases than useful tomatoes. 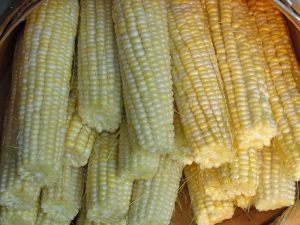 I was late getting my Sweet G-90 corn planted so it didn’t ripen until the last few days of June and the first few days of July.  I picked and shucked 1,000 ears myself!  My mom freezes it both on the cob and cut off for cream style corn.  My family loves to eat sweet corn but apparently hates planting, thinning, weeding, picking, and shucking it!  They do like to grumble about the silks stuck between the kernels however.  I’ve tried to explain it to them like Dr. Parsons “explained” it to me.  First of all, corn ear worms are born in the corn and eat nothing but corn all their life.  Therefore they ARE corn, so eat them and shut up!  Secondly, any ear of corn without corn ear worms is obviously laced with pesticide as they are very difficult to control.  I used BT (Thuricide) organic spray and kept them somewhat under control.  Sweet G-90 is the ONLY kind of corn my family will eat and frequently turn their noses up at other varieties.  If you never grown your own sweet corn, and eaten it hours after picking it, you’ve missed one of life’s simple pleasures.  The longer the ears stay off the stalks the more their sugar turns into starch.  That’s why fresh picked home grown sweet corn is so sweet. 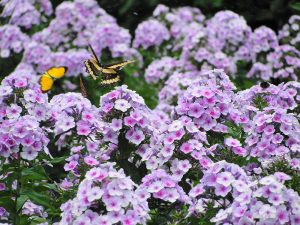 My little front cottage garden was a spectacle in June because of two things; John Fanick phlox and a plethora of butterflies nectaring on it.  The majority of them were giant swallowtails with a sprinkling of pipevine swallowtails, spicebush swallowtails, gulf fritillaries, and sulfur butterflies.  Even visitors that could care less about flowers and butterflies commented on the feeding frenzy. 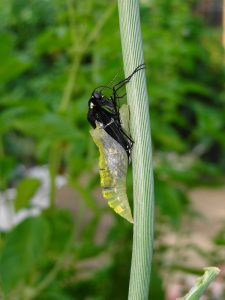 My backyard veggie garden also provided a butterfly treat.  Since my cucumber production was winding down I let the Eastern black swallowtail larvae eat my dill foliage in the herb bed.  Although there were dozens of caterpillars only one chrysalis ended up attached to the stalks.  One day I snapped a photo of it and when the flash went off the “cap” on the chrysalis popped open.  For the next 5 minutes I photographed the adult butterfly emerging from the chrysalis and drying its wings…amazing stuff.

My little back garden also produced another crop of birds in my nest box; this time, an Eastern bluebird family.  Earlier in the spring a family of tufted titmice called it home.  The momma bluebird was very shy and didn’t like me taking photos at any time.  I did manage to capture daddy feeding them though.  The entire family hangs out in the pines behind the house now dining on the bumper crop of magenta poke berries there.

By the time you read this I will have probably already picked up my two new Jack Russell puppies, Acer and Ilex, from Cousin DonCrawford up the road.  Their arrival isn’t a minute too soon, as raccoons are dining in my granny’s old fig just off the back porch.  I tolerate the red bellied woodpeckers and summer tanagers sampling during the day but we aren’t going to tolerate a family of raccoons devouring the whole crop at night.  My Pappaw would have served them to me and asked if the meat tasted like figs!

I managed to publish three articles in July.  The ones in Southern Living and Neil Sperry’s GARDENS were about restoring my grandparent’s old house and garden while the one in Texas Gardener was a rant about a North Texas cemetery association destroying theirhistoric stand of Texas bluebonnets.  Until next month, stay cool.  -Greg