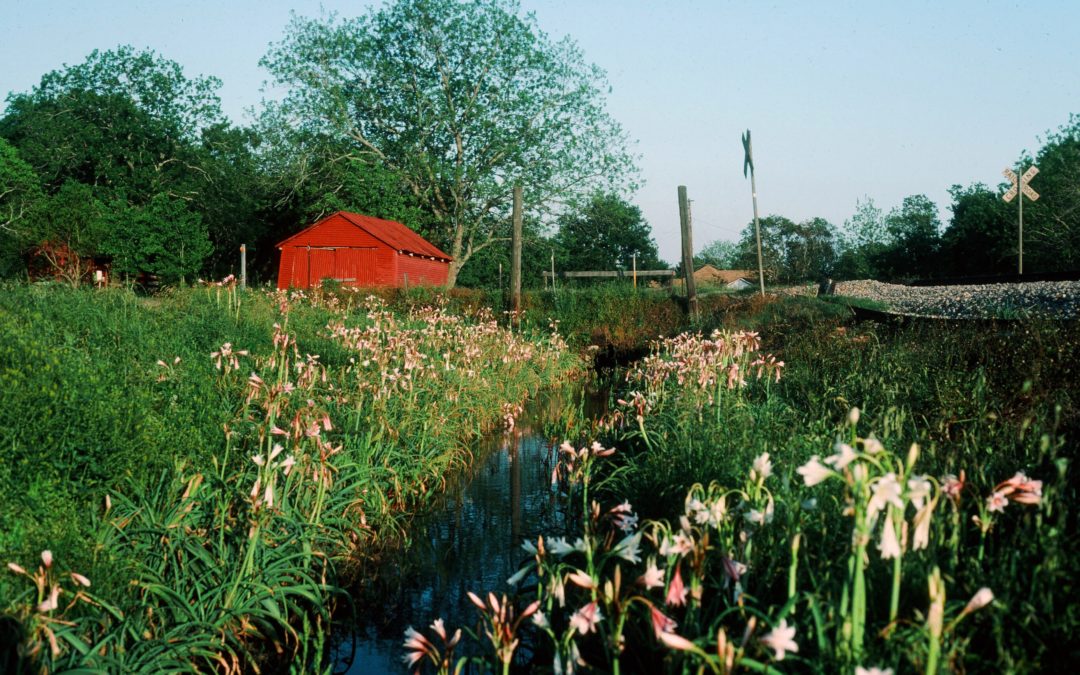 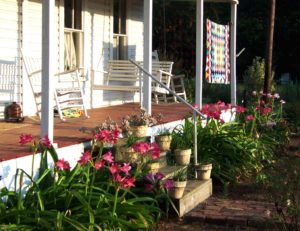 Crinum lilies and I go way back, as they were among the first flowers I knew as a child. My Grandmother Emanis grew them along the front porch here in Deep East Texas where the audacious flowers bathed us with their powerful fragrance during summer evenings. She grew two passalong clones; the dark pink ‘Ellen Bosanquet’ and one of the numerous striped milk and wine lilies (Crinum x herbertii); a gift from my grandfather’s Aunt Estelle; the same one that gave them a chicken for a wedding present. 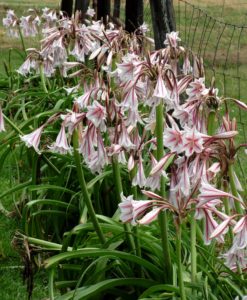 Often referred to as simply “lilies” in the South, our garden crinums are mostly hybrid descendents from a handful of species native to Africa. They are actually in the amaryllis family, not the lily family, though the genus Crinum comes from the Greek word for “lily.” Crinums are one of our quintessential Southern garden plants for several reasons. First, being somewhat subtropical bulbs limits their cultivation to the mid and lower South. Therefore, they won’t be seen in Northern gardens, books, magazines, blogs, podcasts, or TV shows. Secondly, they were introduced to the South by the early settlers, giving them time to be ingrained into our gardening culture. And most importantly, as my friend and mentor, Dr. William C. Welch put it, “No crinum has ever died.” This longevity made them perfect low maintenance dooryard plants in Southern cottage gardens and ideal lily substitutes in family graveyards.

Crinums are to the South, what peonies are to the North; cherished, bold, pass-a-long perennials that provide wonderful cutflowers for both church and home. Peonies belong to the North, as they struggle with the heat, drought, and humidity in the South, conditions crinum thrive under. Although considered typically “Southern,” I think of crinums as pure Texan. After all, they are tough as a boot and so bold they border on being obnoxious. 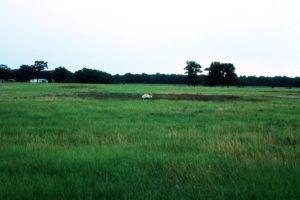 In the spirit of horticultural disclosure, I have to tell you that there are “garden snobs” out there that don’t like crinums because of their coarse, rank foliage. Cannas suffer the same stigma. But crinums, like Texans, are supposed to be coarse textured, and to not like them because of it would be akin to not liking longhorns because they have horns or pecans because they have shells. As Popeye used to say “I yam what I yam” and I see no reason for crinums to apologize for simply being what they are.

In the spirit of horticultural disclosure, I have to tell you that there are “garden snobs” out there that don’t like crinums because of their coarse, rank foliage. Cannas suffer the same stigma. But crinums, like Texans, are supposed to be coarse textured, and to not like them because of it would be akin to not liking longhorns because they have horns or pecans because they have shells. As Popeye used to say “I yam what I yam” and I see no reason for crinums to apologize for simply being what they are.

And what blooms they are. Crinums generally bloom on stalks around three feet tall with clusters of amaryllis-like blooms in white, pink, or pink and white striped. Dr. Welch has always preferred the soft pastel colors while I’ve always been fond of the loud, striped, milk and wine lilies. He says they are “gaudy,” but where I come from that’s a compliment. 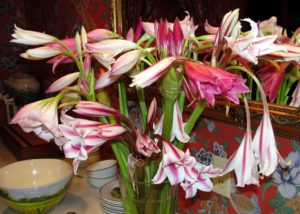 For sure, the vases used for these tall, heavy flowers must be sturdy and heavy themselves. I often display them in antique watering cans. As each individual blossom fades in the cluster, they can be snapped off and discarded while the rest of the unopened buds continue to open. Most crinums have very fragrant flowers, especially in the evening, when they are often pollinated by perfume seeking moths. They are superb economical but stunning cutflowers for summer weddings, family reunions, horticultural seminars, office break rooms, and cemetery homecomings.

While most commonly used as specimen plants in the landscape or in mixed perennial borders, crinums are also make outstanding summer perennials in bold sweeps and masses. For best performance be sure and provide them with full sun or very light shade. And though they are constructed to survive long droughts with their huge underground bulbs, they make nicer foliage and more blooms with regular rainfall or irrigation, something I admit to seldom providing. They are also among the very few bulbs that can have their foliage removed occasionally if it’s marred by drought or thrips damage. Healthy new foliage will spring forth with the next rain or irrigation event. This foliage removal is a definite “no-no” with traditional spring and fall bulbs (Narcissus, Lycoris, etc.) though, as each year’s foliage produces next year’s blooms. 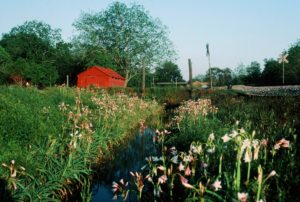 There are actually hundreds of crinums cultivars. Unfortunately, due to their bulb size and lack of cold hardiness in Europe and the North, they are not common in the nursery trade. Some of the most common crinum lilies Texas gardeners will encounter are Crinum x digweedii (pale pink and white striped, in fall), Crinum x gowenii (pale pink and white striped, in summer) Crinum x herbertii (pink and white striped, in summer), Crinum x powellii ‘Album’ (white, in early summer) and ‘Ellen Bosanquet’ (dark pink, in June). Unfortunately, two of the most common crinums in Texas gardens are among the least showy. These are Crinum bulbispermum which has gray-green foliage and smallish white or faintly striped flowers in early spring and summer with a hint of bleach in its fragrance. It sets seeds and has naturalized in bar ditches in Central Texas. Don’t be too hard on it however; as it’s the most cold hardy of all crinums and the parent of most of our successful garden crinums. The other is the light pink ‘J.C. Harvey’ which multiplies prolifically but blooms very sparsely in mid-summer. This unfortunately makes it our most common passalong crinum. I once picked up a discarded clump off the roadside in San Antonio. Just remember, you get what you pay for!

If you want to read more about crinums, my friend Jenks Farmer in South Carolina wrote a book about them (Gardening with Crinum Lilies) which is available on his website (jenksfarmer.com).