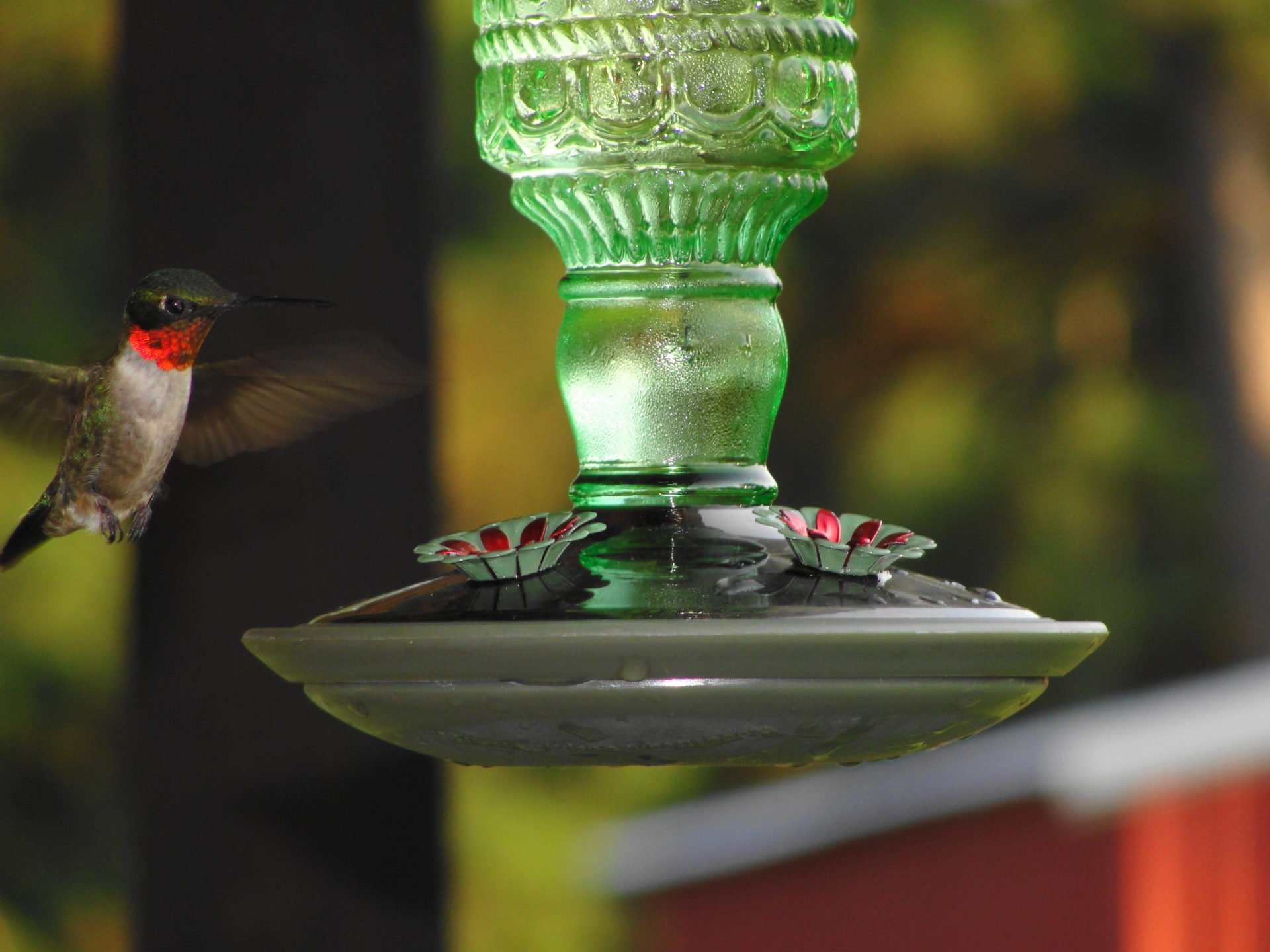 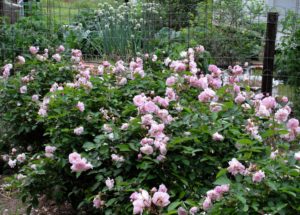 Last month I led the staff of the Guizhou Botanical on a tour of the Tyler Rose Garden where they were fascinated by the buzzing hummingbirds on the Turk’s cap. We are spoiled with these amazing creatures as they don’t have hummingbirds in China.

When I was a youngster growing up outside of Longview, one of my money making jobs was mowing the large lawn of the late Marie and Autry Daly (yes, she’s the one I named the pink ‘Marie Daly’ polyantha rose for). Though word through the juvenile grapevine cast them as child-loathing witches, they turned out to be the nicest couple I ever met. Since they had no children of their own, they naturally took me under their caring wings. 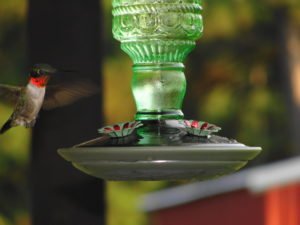 I owe much of my deep admiration for birds in the garden to this saintly couple. They not only kept food and water out for the birds but also sported the first martin house, bluebird nest boxes, and hummingbird feeders I had ever seen. Though they didn’t refer to it as such, their Tryon Rd. hilltop landscape was truly a backyard bird habitat.

Mrs. Daly was particularly fond of her precious hummingbirds. She had three feeders hanging from the eves of her house that she had to refill each and every day. While mowing “the back forty” as they called it, the back of the house appeared to be shrouded in feathered green bees. I had never seen so many in one place. She was as tough as she was nice and would drag her step stool from feeder to feeder so she could snip the wasps in half that were lapping up her hummer’s elixir. She was a giver and graciously gifted me my first hummingbird feeder. 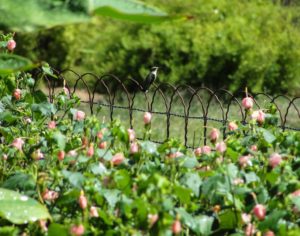 Mrs. Daly’s love of hummingbirds didn’t end with artificial feeders. She also kept a yard full of flowers for them including the first Turk’s cap (Malvaviscus arboreus drummondii) I ever experienced. The constant sulfur butterflies and somewhat edible fruit captured my attention at first until I noticed that the steady stream of hummingbirds claimed them as their favorite. It was then that I was officially hooked on both hummingbirds and Turk’s cap.

The hummingbirds in Marie Daly’s landscape (as well as my own) were ruby-throated hummingbirds. They are the most common hummingbird in the Eastern United States. Like all hummingbird species, the ruby throat is only here during the growing season, returning to Central America for the cold winter months. But it’s not the only hummingbird species in our super-sized state. Eighteen species of hummingbirds can be found in Texas, more than any state in the country, with nearby New Mexico and Arizona close runner-ups. If the total number of species interests you, then you need to visit the Davis Mountains (especially Jeff Davis County) where sixteen different species of hummingbirds have been documented, with five or six breeding there. If the actual volume of hummingbirds peaks your interest, than you need to be on the Coastal Bend of Texas (near Rockport and Fulton) during September when the ruby-throated hummingbirds gather in mass before heading across the Gulf of Mexico. They gather and pause there to store up on much needed nectar and protein before their long exhausting flight to the Tropics. 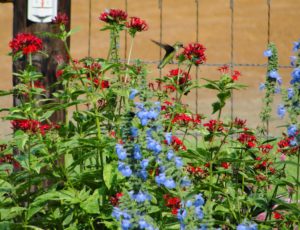 I’m perfectly happy with only my beloved ruby-throated hummingbird species in my East Texas cottage garden. They are a never ending source of amazement and delight whether in flight or at rest on my double loop wire fence. I also relish my own swarming mass of hummingbirds that gather around my assorted Turk’s cap cultivars each fall. It makes gardening worthwhile and shows us what an important part we play in our ever-threatened local ecosystems.

Anyone can fashion their home landscape into a hummingbird oasis by providing the same three essentials that all birds need–food, shelter, and water. We are all familiar with artificial hummingbird feeders filled with sugar water at a ratio of 1 part refined sugar boiled in 4 parts water (red dye isn’t necessary and is not recommended). But it’s more satisfying to create a natural hummingbird paradise using their favorite nectar plants. These include all salvias, Turk’s cap, pentas, cigar plant, columbine, hibiscus, coral bean, red yucca, cardinal flower, Indian pink, standing cypress, red buckeye, cypress vine, cross vine, trumpet creeper, and coral honeysuckle. One can never go wrong with red flowers, especially tubular shaped ones, but my blue and purple salvias along with pink Turk’s cap do the trick as well. 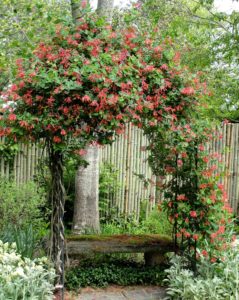 They also need sources of protein including many insects and spiders. Spiders are especially important to hummingbirds as they provide both food for the birds and material to construct their nests (binding bits of lichen together). Cultivating and providing a constant source of small live insects for both hummingbirds and other songbird means limiting pesticide use as much as possible. I do this by choosing the toughest and longest lived plants possible, including as many natives and time-tested old-fashioned plants as I can. Native plants are what hummingbirds evolved to exist off of. As a matter of fact when red buckeye and coral honeysuckle bloom each spring you know it’s time for them to return—right on cue as they have for thousands of years.

Goodbye tiny dancers. We’ll all miss you and be waiting for you next spring. -Greg