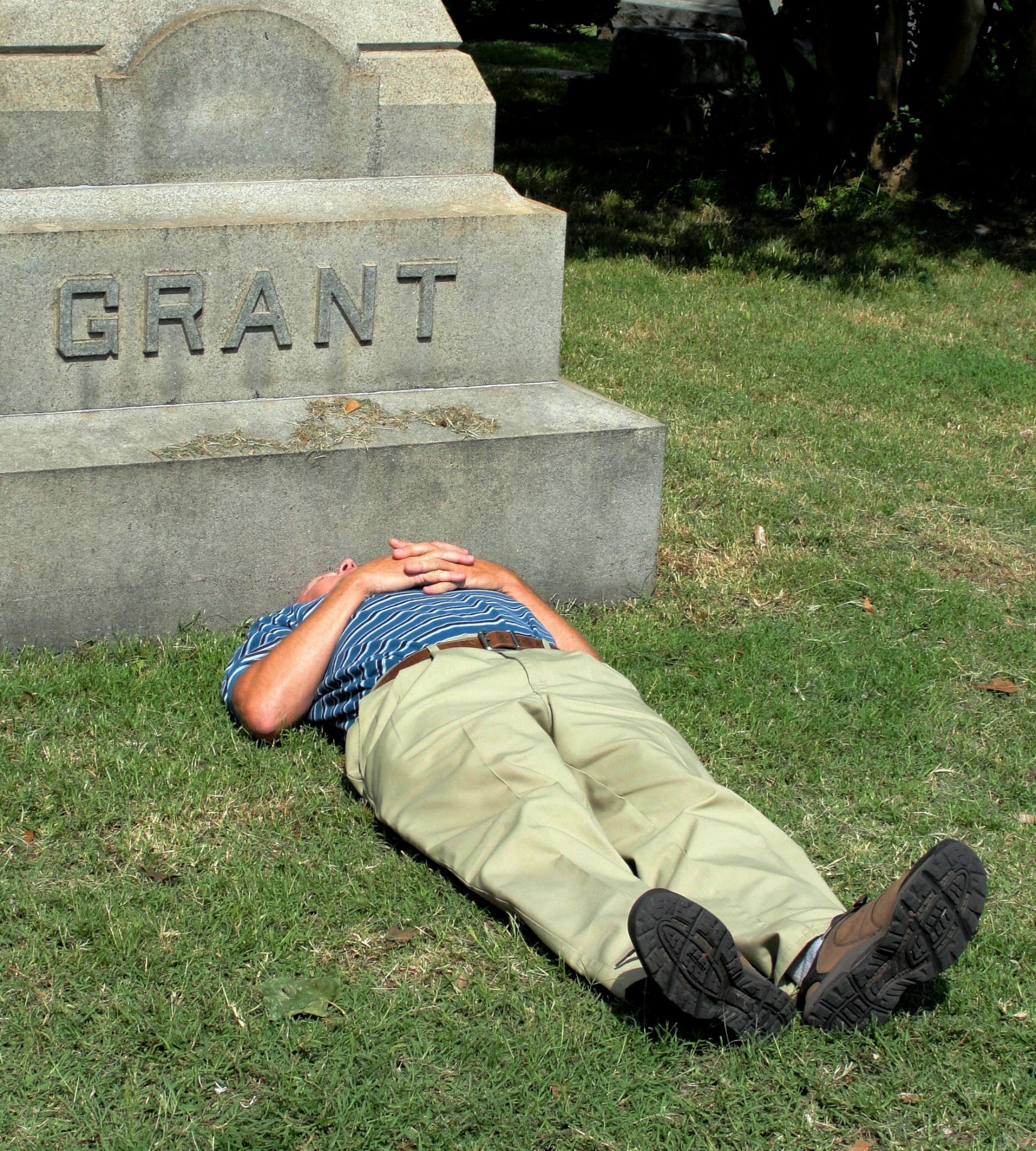 Flowers on earth he loved to grow.

The rose of Sharon’s now his to see,

A gardener in heaven he’s sure to be.

All Hallow’s Eve, Halloween, All Saints’ Day, All Souls Day, and Dia de las Muertos. I was born right in the middle of all of these, so of course I have a firm grip on life and death and see cemeteries as 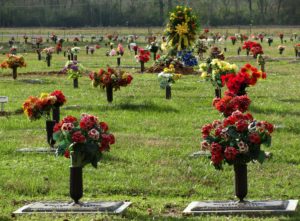 basically a family reunion. The grim reaper commeth, and I ain’t scared. And yes, years ago, I wrote my own epitaph. If you live amongst nature and gardening you well know that death is just as much a part of life as life itself. Thinking death is scary or evil is like thinking the same about compost or a family of eastern bluebirds in a dead snag’s abandoned woodpecker cavity.

I’m sure it helps that my grannies hauled me around to the local cemeteries to meet my relatives. It also helps that I love studying both culture and horticulture in graveyards.

After all, the traditional cemetery not only served as a resting place for deceased loved ones, but as a garden of beloved heirloom plants as well. Unfortunately, these historic col­lections of local customs, artistry, and plants are rapidly becoming a phenomenon of the past. The “perpetual care” cemetery, a depressing blanket of manicured turfgrass and rows of gaudy silk flowers has all but replaced our historic burial grounds.

Each Texas culture produced its own distinc­tive type of graveyard. Of particular interest to me are the Hispanic cemeteries with their multitude of brightly colored flowers, a profusion of crosses and religious icons, and many handmade markers of wood, cement, and tile. The German-Texan cemeteries typically offered a fine display of ironwork, and the graves were commonly bordered with hand-carved or hand-cut wooden curb­ing. The Anglo population was the least enterprising in this matter, and seems to have been the first to switch to the turfgrass-monotypic marker-plastic flower 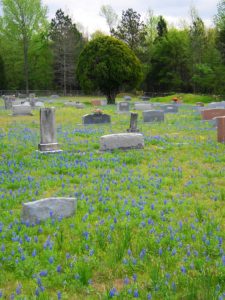 Instead of the mass-produced tombstones you find today, Texas cemeteries used to offer a wide variety of markers fashioned from a range of materials, includ­ing wrought iron, native stone, and wood, side by side with those professionally carved in granite and marble. And because curbing was popular (not just with German-Texans) gravesites used to be perfect raised beds for planting shrubs and flowers. I call this “raised dead” gardening!

Gravesites were often (and still are in some ar­eas) decorated with such things as sea shells, marbles, medicine bottles, and toys. The presence of such sym­bols in our cemeteries actually traces back to pagan influences. There’s also evidence of our African heri­tage in the old-time Texas cemeteries, for that cul­ture seems to have been the one responsible for scrap­ing and sweeping to keep the soil surface there clean and bare. Long before turfgrass, glyphosate herbicide, lawn mowers, and string trimmers, our cemeteries were kept meticulously barren of grass and weeds as a sign of respect, to promote neatness, and to prevent snakes, grassfires, and grazing. 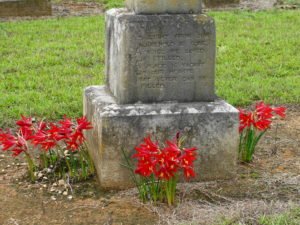 Plants of all kinds were planted in our cemeteries of the past. Many had religious connotations, such as evergreens, which symbolized everlasting life. What Texas cemetery doesn’t have an eastern red cedar of an arborvitae in it? Anything remotely resembling a lily was considered a flower of death, and crinums, amaryllis, lycoris, hymenocallis, oxblood lilies, and narcissus as well as true lilies all found their way into the cemeteries under this guise. Many of our lily-like cem­etery plants were originally symbols of the Mediterra­nean “great mother,” which later came to symbolize the Virgin Mary. Other common cemetery flowers in­cluded roses, crapemyrtles, and irises. White flags (Iris x albicans), often planted on graves in the Middle East centuries ago, are still a frequent sight today in Texas cemeteries.

It was once a custom to plant a deceased one’s favorite plant or plants on their grave. Long after their garden popularity waned, many of these plants cling to life in a few precious older cemeteries today. Oftentimes these cemeteries may be the only source of certain cultivars and species. Many antique rose cultivars have been res­cued and reintroduced into the nursery trade from cemeteries. Folks like to quote my old expression “If the dead can grow it, 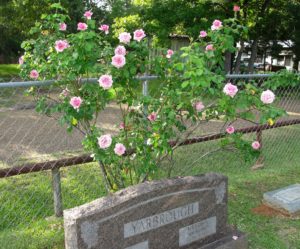 you can too,” and it’s true. Other than additional bone meal, those sleepy folks aren’t doing anything that you can’t.

I find it exceedingly sad to see trees cut down, chain link fences erected, shrubs mutilated by string trimmers, roses killed with nonselective herbicides, and bulbs and wildflowers mowed before their foliage or seed ripens. Some senseless groups have even gone so far as to ban­ish living plants from the cemetery! It’s considered all right, however, to scatter hideous artificial reproductions all over the ground. Just because the people are dead, do the flowers have to be as well?

We used to maintain our cemeteries in annual get-togethers, when whole fami­lies would assemble to tend the graves of loved ones. And who, pray tell; can argue against beautiful, low-main­tenance, living plant material in a cemetery? Why not return our cemeteries to their old-fashioned role as fam­ily meeting places, cultural museums, and historic bo­tanical gardens? They were once even used as public parks. Why not? Nothing but history and horticulture here. 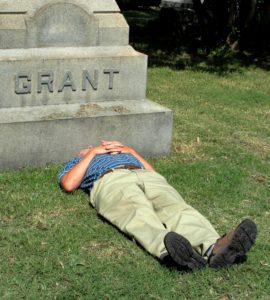 My late great grandfather Famin Emanis (Firmin Ximines) tended the local Pleasant Grove Cemetery nearby, the same one where two-thirds of my relatives are buried and where I’ve tucked in an assortment of crinums, roses, and a pink crapemyrtle from his son’s old homeplace. The only plants safe from the grim mower man there are inside curbed graves but I’ve also taken advantage of the spaces between headstones where his scythe can’t reach.

I’ve always been intrigued by the Hispanic culture’s Day of the Dead. Seeing folks embrace death and loved ones with flowers and food is comforting. Orange marigolds, sugar skulls, and loving altars for longed-for relatives will always have a place in my heart. I ain’t scared. –Greg Grant