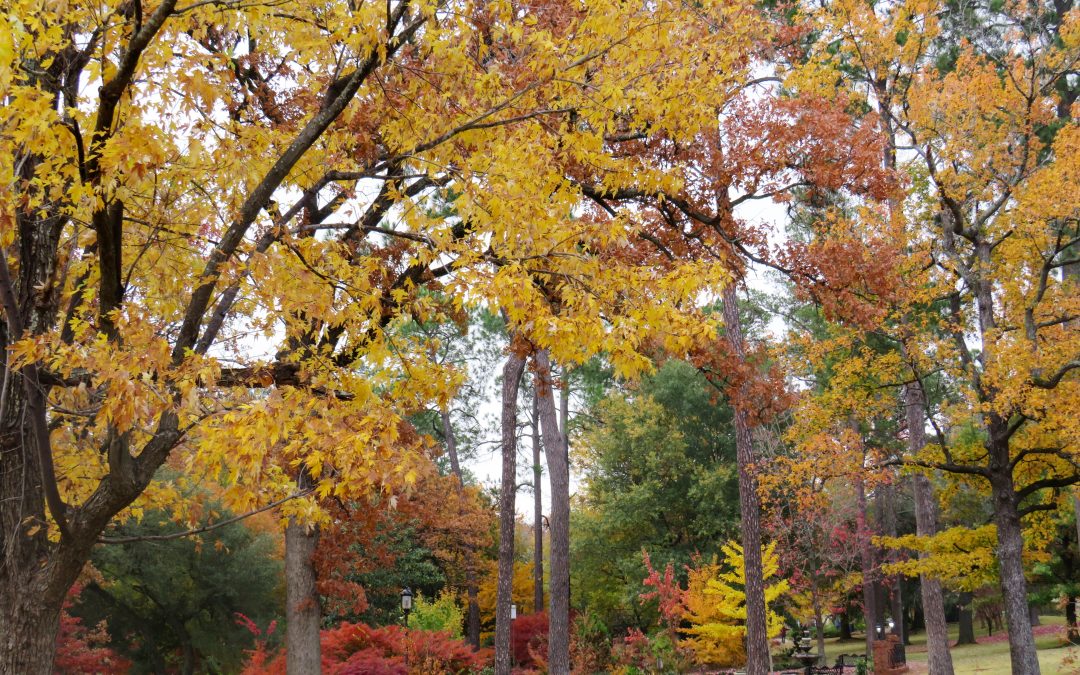 Folks, we’ve been through a tough stretch. It’s always “something,” but the gauntlet that included Covid, Snowmageddon, and this summer’s drought, capped off by my fall battle with both statistics and research methods classes at SFA was about more than I could handle. We were all due for something good…a miracle on 34th street if you will. Any ray of sunshine, a promising rainbow.

We all love color and in East Texas, we expect to get at least some semblance of fall color. Experience tells us that no year guarantees us showy fall color, as there are complex biological and meteorological factors involved. In our case, the biggest impediment seemed to have been another heart-breaking summer Texas drought and heat wave. As usual, these tend to leave us wondering if the trees will be dead and sporting no leaves at all as opposed to envisioning what color they are going to be. 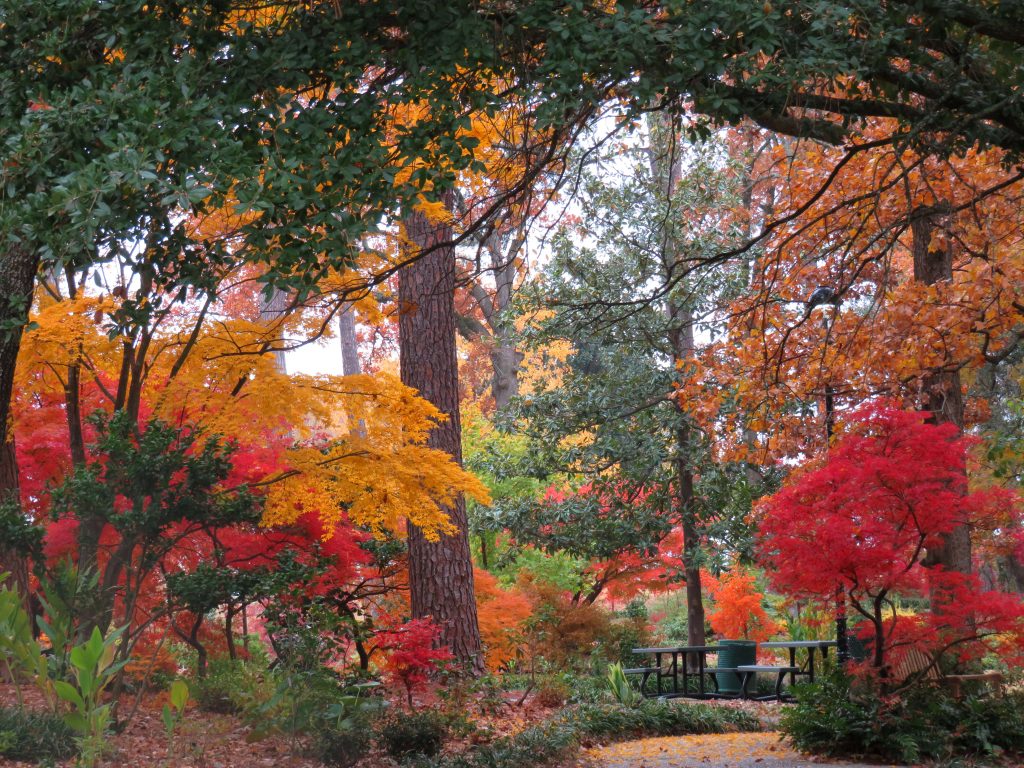 But memory kept telling me. Don’t forget the drought of 2011. That stretch was the worst drought in my lifetime capped off with the prettiest fall color in my lifetime. The hundreds of maples in the Ruby Mize Azalea Gardens at SFA looked like the hills of Japan or New England. It was a stunning sight to behold.

Experience also reminded me of several other truths throughout my leaf-loving life. 1. An early cold snap followed by no hard freezes until December or later often leads to nice fall color. 2. Our showiest fall color in East Texas often occurs during the last few weeks of November and the first week of December prompting me to often say, “dial somebody up in New Hampshire and ask who has the prettiest fall color, right NOW?!”

Rule number 1 was covered when we reached a low of 30 degrees at my farm on October 19, almost a full month before our average first frost in mid-November. And then, thanks to our third LaNiña in a row we didn’t have any hard freezes to knock the chilled foliage off, leading us right into a colorful late November/early December as beautiful as most onlookers could remember in their lifetime.

Early hard freezes cause fall foliage to go from green to dead to the ground, while early cool temperatures cause green chlorophyll production to cease, revealing the yellow and orange xanthophylls and carotenoids. But the hard part to predict is the red, burgundy, and purple production of anthocyanins which is usually produced more in bright light, and apparently the stress of drought in my limited experience.

I never met a fall color I didn’t like, but these are some of the trees known to provide some of the best in my neck of the woods.

Baldcypress: Although some don’t consider rusty red a fall color, I’ve always admired the change of this ancient conifers deciduous foliage and look forward to it each year.

Black gum (tupelo): This tree of the eastern forests tends to be among the earliest to show fall color (along with sassafras and sumac) and generally sports dark shades of red and wine. An improved cultivar named ‘Wildfire’ is worth seeking out that has orange new growth and better resistance to leaf spots.

Chinese Pistache: This popular shade tree is in the same family as sumac and poison ivy both known for fall colors as well. The colors of Chinese pistache can be anywhere from yellow to orange to red. Due to unwanted volunteer seedlings, I suggest only planting a male cultivar, as in addition to not producing seed, they also have a shapelier form. The only male currently on the market is ‘Keith Davey,’ but I’m also trialing a National Arboretum selection (USNA32226) for SFA Gardens (as SFA10515) and my own selection (‘Redlands’) that I hope to get in production one day. 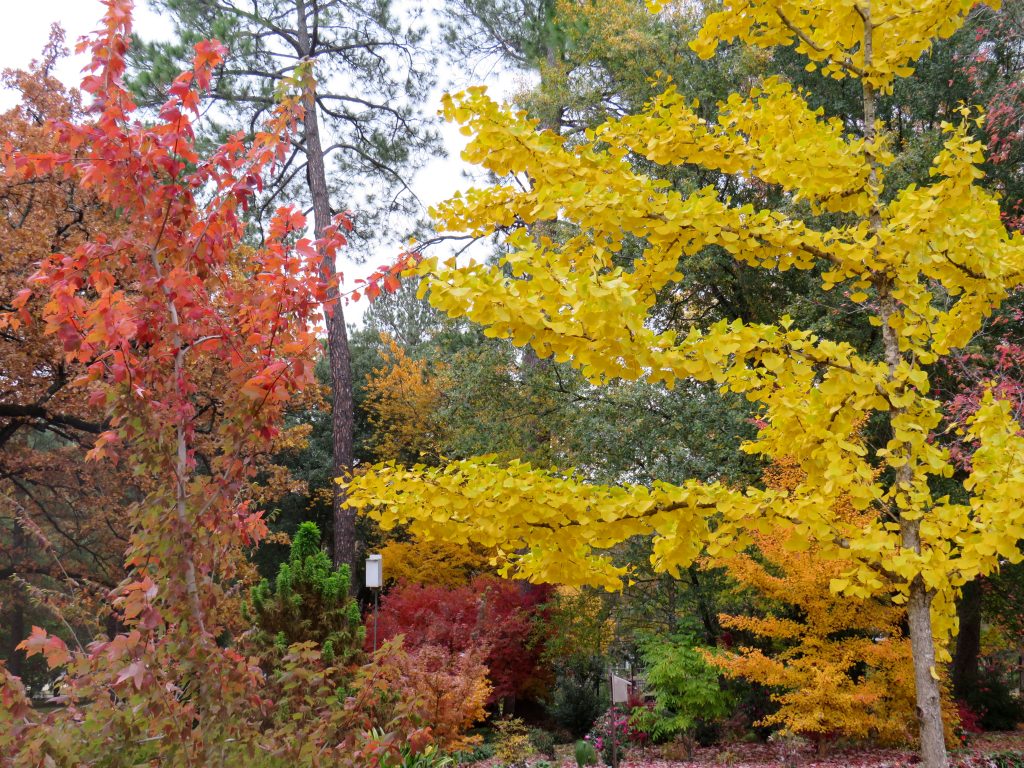 Ginkgo: These ancient Chinese trees are slow growing but are known for their spectacular golden-yellow fall color. Only male selections of this one should be grown as well since the females produce fruit that smells like vomit! Thankfully almost all named cultivars are male. 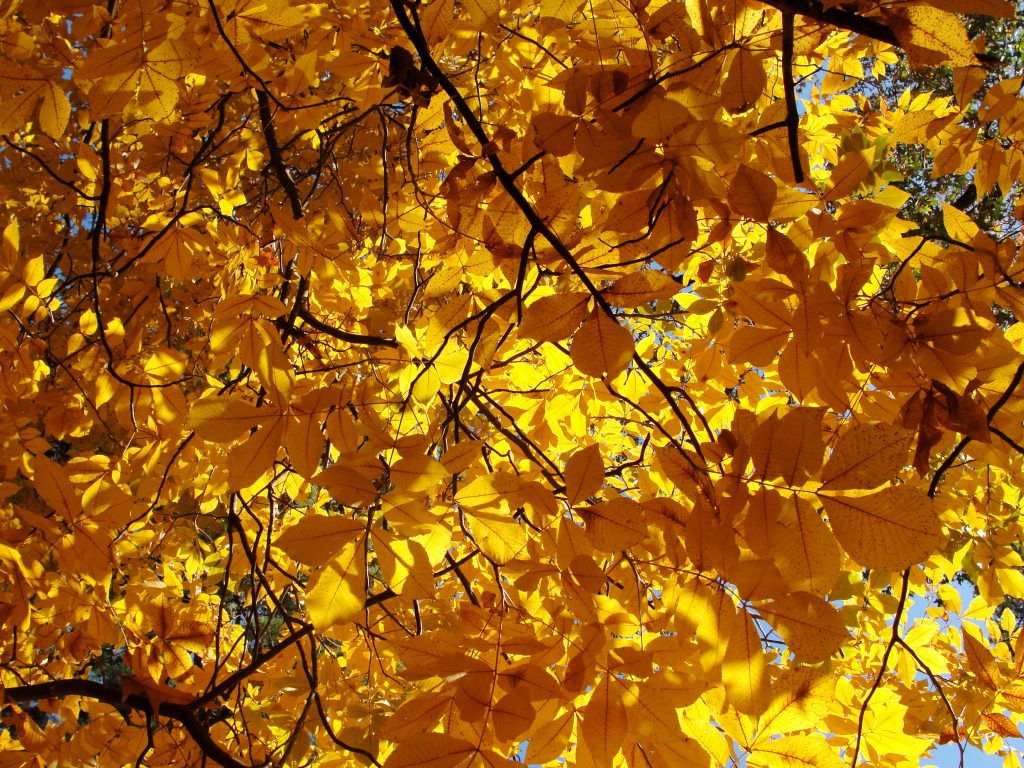 Hickory: There are eight species of hickories native to Texas that I know of, including our state tree, the pecan. They are known for edible nuts that benefit both people and wildlife, wood for BBQ, and golden yellow fall color. 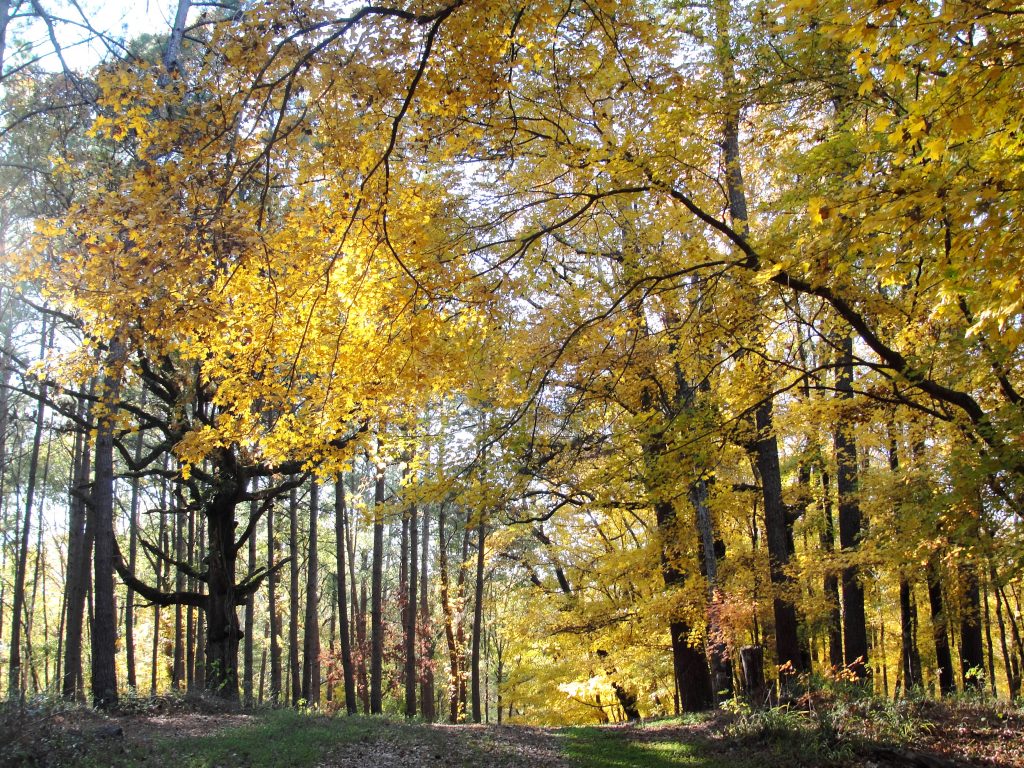 Maples: Maples whether Chalk, Japanese, red, Shantung, sugar, or trident, maples are the undisputed kings and queens of fall color. Bigtooth and Caddo maples are more adapted to the alkaline soils of Central and North Texas while all others prefer the Pineywoods of East Texas on to the East Coast. ‘Fire Dragon’ Shantung maple is certainly worth seeking out as a tougher alternative to Japanese maples and will even grow in the drier more alkaline regions of our diverse state.

Oaks: Not all oaks provide reliable fall color but Shumard red oak, swamp chestnut oak, and white oak certainly do. Since almost all oaks are produced from variable seedlings, I suggest making your choice in the fall so you can see what you are getting.

Sassafras: Sassafras has long been known for variable mitten-shaped leaves, sassafras tea, and fall colors that generally include orange and red.

Sweetgum: Most East Texans don’t like sweetgum trees because of the hard spiky balls they produce and don’t prefer them in their landscapes, but almost all enjoy the amazing range of roadside fall color they produce.

Sumac: The three common native sumacs in Texas (flame leaf, smooth, and winged) all produce beautiful orange and red fall colors in dense stands along our highways and forest edges.

The naughty list: These two colorful thugs are known for their glorious fall colors and for being invasive, which means producing an exponential plethora of volunteer seedlings that naturalize ad nauseam and threaten local ecosystems and native flora.

Bradford Pear: One of the most popular ornamental trees ever introduced in the U.S. is now contributing legions of thorny volunteer seedlings throughout the country after teaming up with old Callery pear orchards where rootstock for edible pears used to be produced. The foul-smelling white blossoms of this Chinese species are showy as are the incredible fall colors, but the expanding dense thickets of thorny trees are a nightmare.

Chinese Tallow: Chinese tallow is known for producing shocking fall colors even where winters are mild, but unfortunately, it’s one of the most aggressive invasive exotic trees in the South and has pretty much taken over much of our vanishing Texas coastal prairies. Incredibly it’s also perfectly happy in a forest, field, or fence row. Ughh.