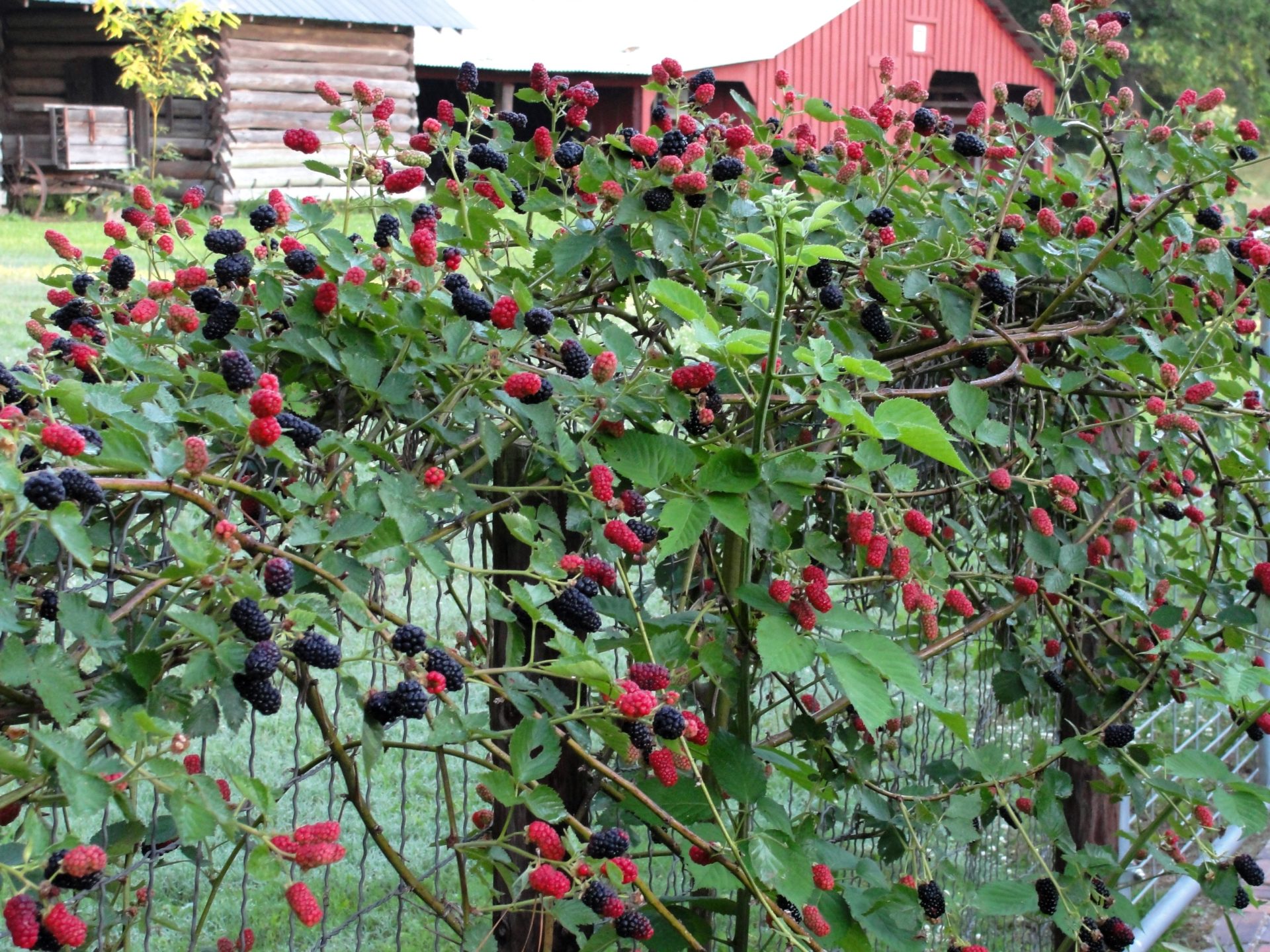 I recently attended our annual Texas A&M AgriLife Extension horticulture annual professional development training and retreat and had the honor of rooming with my mentor Dr. William C. Welch. This year’s meeting was held in Brazoria County and was hosted by their Texas A&M AgriLife county extension agent in horticulture, Stephen Brueggerhof. 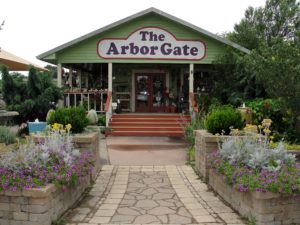 It was only my second time to visit down there. My mom and grandparents used to live there in the 1940’s when my granddad worked at Dow Chemical for as long as he could tolerate being away from Arcadia. It was nostalgic seeing the signs for Dow, Clute, Freeport, Oyster Creek, and the others I had heard stories about for years.

My mom loved it there because they had a nice little frame house, curbed streets, and she got to buy her school clothes in Houston. She’s still not happy that she was dragged back to a ramshackle Shelby County farmhouse and had to chop sugar cane and cotton and use an outhouse. Plus, she refused to open her math book at Timpson and when asked why, told the teacher, “Because we finished this book LAST YEAR in Clute!” 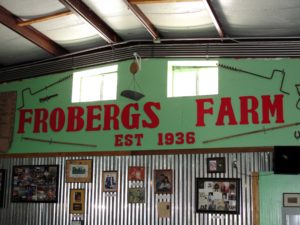 The highlights of my trip were swinging by The Arbor Gate nursery in Tomball on the way to pick up a ‘Keith Davey’ male Chinese pistache for my trial and a nice trellis for Mrs. G to grow her beloved Confederate jasmine on; visiting Frobergs Farm established in Alvin in 1936; and stopping to see my friend and Texas Rose Rustler extraordinaire, Becky Smith, in East Bernard on the way home. Becky is the Queen of ornamental stepping stones and has made LOTS of them, including one dedicated to each of my beloved past terriers. Despite having to fight through two hours of Houston traffic on the way home, it turns out the visit to Becky’s was worth the entire trip because thanks to one she was growing, I was able to identify a mystery rose we have at the Tyler Rose Garden that many of us love and admire.

The rose now known to be ‘Flamenco Rosita’ (Ivor’s Rose) was originally located in the Smith County Master Gardener’s IDEA Garden but was too large for the space. However when they were getting rid of it, I took it to our Heritage Rose Garden since it had old-fashioned looking flowers and we had plenty of space for it. The rose was bred in England by Amanda Beales as a cross between Bonica® and ‘Roundelay’ and was originally named Ivor’s Rose for a retired local English weatherman. It was once a part of the Biltmore® Garden Rose Collection and was introduced to Tyler by Chamblee’s Roses in 2014. 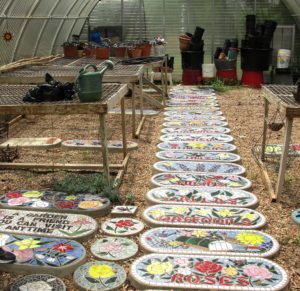 Unfortunately while in Brazoria County I was talked into a “team building” softball game on the beach our final evening and arrived home with my painful bionics barely able to walk. The long ride home, plus riding and mowing on the tractor all weekend, didn’t help. Luckily a heavy dose of naproxen sodium, jelly beans, and fresh blackberries made me semi-functional again.

Now, what to do with all these blackberries? I used to have both blueberries and blackberries in my little back garden which was completely composed of edibles, but after Mrs. G staked full claim to it, the blueberries were removed with a lawn and a shade-giving Basham’s Party Pink crapemyrtle (a Texas Superstar selection) added so she and the cats can shade bathe back there. The thornless Natchez blackberries (also a Texas Superstar selection) are trained on the back fence and other than a pesky mockingbird, are easy to grow, 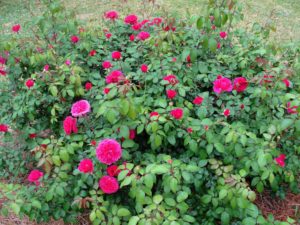 My favorite, most flavorful blackberry to eat will always be wild dewberries (Rubus trivialis) but Natchez has become my favorite heavy producing thornless cultivar. I started years ago with a row of Rosborough blackberries (a Texas A&M introduction) which were very productive but very thorny and were rarely completely picked. Then I moved on to a half row of Navajo and half row of Arapaho thornless blackberries from the University of Arkansas and was fonder of the Arapaho because it produced a bit earlier before drought stress hit. Still spoiled by dewberries, I wasn’t particularly impressed with the flavor of either so changed the entire row to Oachita thornless blackberry, another University of 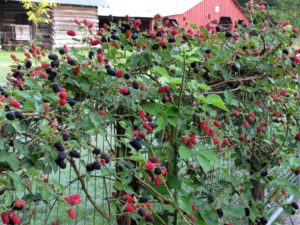 Arkansas introduction. It too wasn’t the ideal taste for me but my mom still uses them for cobblers and jelly. After seeing and tasting Natchez two years ago at our annual meeting in Lubbock I decided it was the one I needed. It needs training, but I think it’s worth it. Being thornless sure makes it easier to pick and train.

Though Texas A&M once had the premier blackberry breeding program in the country, that honor now belongs to the University of Arkansas. Like blueberries, blackberries are native to America and can be grown organically while supporting native pollinators. For more information on growing blackberries see the Texas A&M AgriLife publication titled “Blackberries” on the Aggie Horticulture website at https://aggie-horticulture.tamu.edu/fruit-nut/files/2015/04/blackberries_2015.pdf.