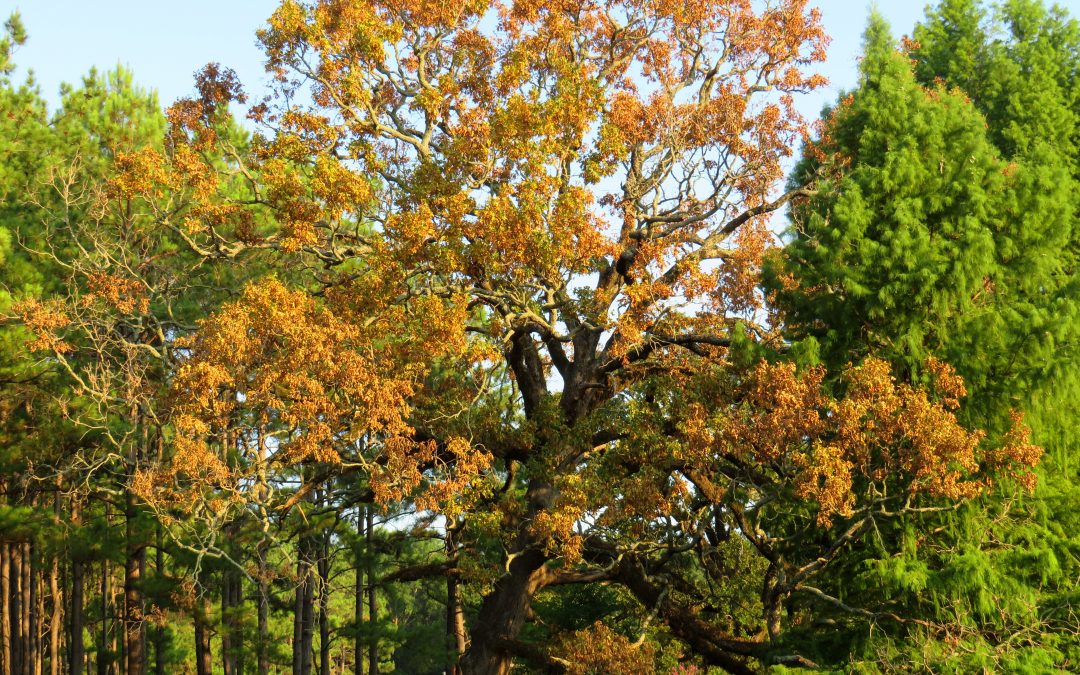 I start most of my garden trainings with this revelation: Everything you plant will die. And no truer words have I ever spoken. Accept it and your relatively short period of time here on earth will be much more peaceful. Your job as a steward is to lengthen the lifespan of each plant under your care. Death can come quickly or slowly; but come it will.

Unfortunately, most beginning gardeners don’t understand what a wide range of typical lifespans exists in the plant world. For example: Cut flower are dead when you buy them. Beautiful florist pot plants like gloxinias and cinerarias will generally die within months. Most vegetables and annual bedding plants only live during a specific season based on temperature. Many long-lived perennials popular in other parts of the world are often annuals or short-lived perennials here. Both beautiful and popular, dogwoods hardly ever live a full life. And, as Winter Storm Uri showed us, many well adapted shrubs are only as long-lived as the next natural disaster or even man-made disaster in the form of a lawn mower, string trimmer, or chainsaw yielding spouse.

Mrs. G says I’m just being negative when I tell folks that certain plants are going to die well before their normal time. I’m not being mean and heartless. I’m being honest. It’s my job. So, when I told her that the pretty little prayer plant wasn’t going to do well indoors, she insisted. And, when I regularly tell Master Gardeners that lilacs won’t work well (or at all) in Texas, they literally think I’m trying to keep them from something. And when the gentleman invested money in a lilac farm for his wife in East Texas didn’t believe my dismal outlook, he chose not to believe me.

America. I’m not trying to keep you from plants that you want. I’m trying to match you with plants that want you. If you truly love plants like I do, then you want them to be as happy for as long as possible whether that be spring only, spring till frost, or long after you are gone.

But even when choosing or inheriting long-lived plants, there is no guarantee that their time won’t end on your watch. It hurts me deeply (to the point of tears) when an aged plant dies while I’m its caretaker. Case in point: A big post oak (Quercus stellata) on my property, near my little cypress swamp/rain garden, passed away suddenly last month. It wasn’t completely unexpected however after the zero-degree temperatures of Winter Storm Uri uncharacteristically killed and damaged countless native water oaks, southern red oaks, and other post oaks in East Texas. My other big posts oaks escaped damage but this one took about a 50% hit during Snowmageddon. It probably didn’t help that it was near a little vernal pond built years ago when a country store was in operation out front. Post oaks after all occur in very well-drained sites. It also had enough lean to it that I fully expected to see in lying on its side in the little swamp one day. And it did absorb into its old trunk an old sickle mower blade presumably left next to it by my grandfather. 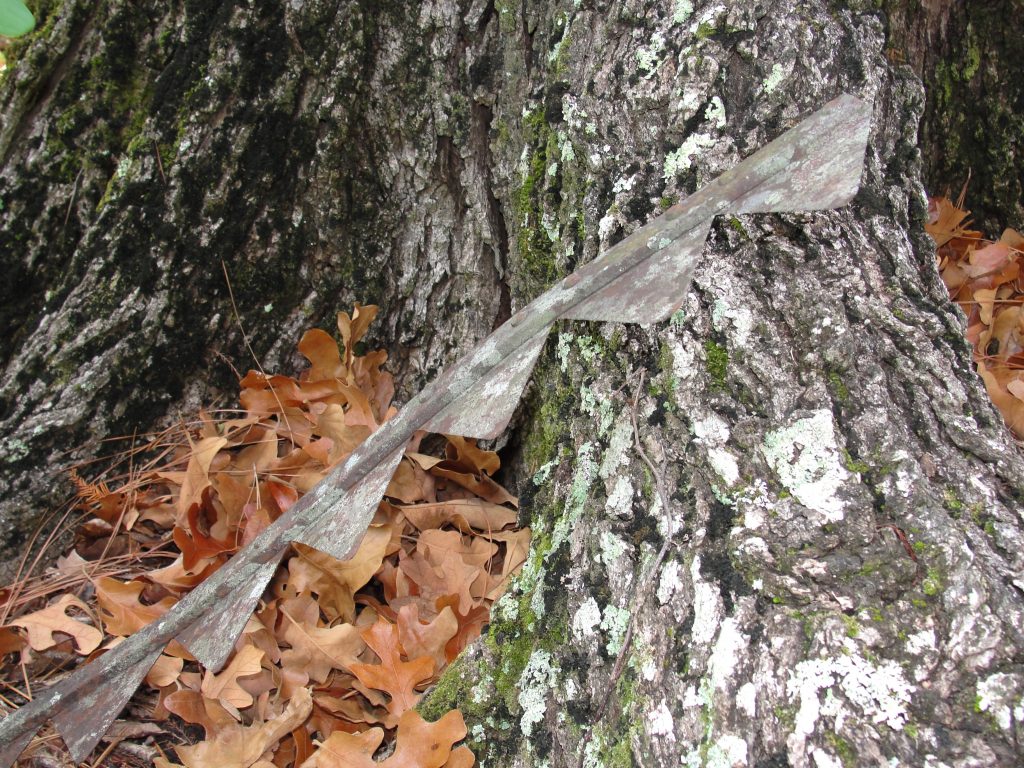 Post oaks aren’t grown in the nursery trade, they grow slowly, and don’t produce any fall color. But they are sturdy and faithful friends that I grew up with both in our yard in Longview and at my maternal grandparents’ place in Deep East Texas. Back in the day, their claim to fame was fence posts and firewood. The inside of my old barn is also made out of post oak planks.

I’ll leave this dead one standing to host numerous primary and secondary cavity dwellers. Nothing in nature truly dies as its energy will be reabsorbed by the cypress trees nearby and the more moisture-loving white oak (Quercus alba) that I’ll replace it with. I will miss its massive stature, its shade, its history, its sense of place, and especially the green robe of resurrection fern that it was home to. This tree saw three different country stores come and go on the place including my grandmother and pappaw’s M&E Grocery nearby. It saw the Arcadia School, the Woodmen of the World lodge, and the Arcadia Community Center come and go. It saw decades of “dinner on the grounds” associated with the long-gone Arcadia Missionary Baptist Church just yards away. It saw both dirt roads at the intersection become paved roads. And luckily it outlived the memory of a lynching in one of its siblings nearby. I’ll be the only one left on the planet that remembers the green dinosaur on the Sinclair sign just feet away and Cousin Ruben’s “bee gum” at its base. When I was born 59 ½ years ago, it was a large tree and I hoped that it would be a large, living tree when I died. But fate is as inevitable as death. So, I’ll mourn. Mrs. G morns for minutes. Greg mourns for years. Some forget easily. I don’t. 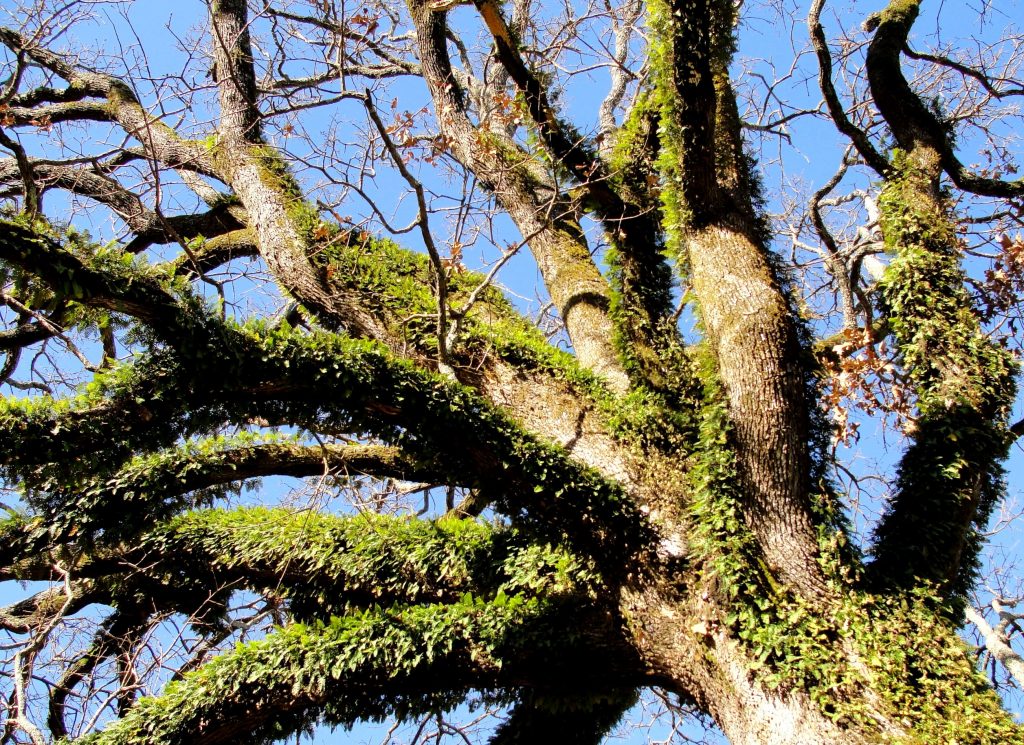 When I was a child, I specifically remember 10 other large post oaks in the same general upland grove on my grandparents’ property, not counting the one that I was told the two lanes of the former dirt road out front split around. I remember the location of each one and the reason each one passed away. The first was from a lightning strike and when it was cut some 30 years ago, I counted 125 rings. Another went on to die from a lightning strike, three from hurricane winds, one from damage inflicted by a Highway Department road grader, one from soil compaction by years of parked vehicles, three from poor drainage created by construction of the small pond, and now one from freeze damage followed by drought. Some of those were preventable. All were inevitable. 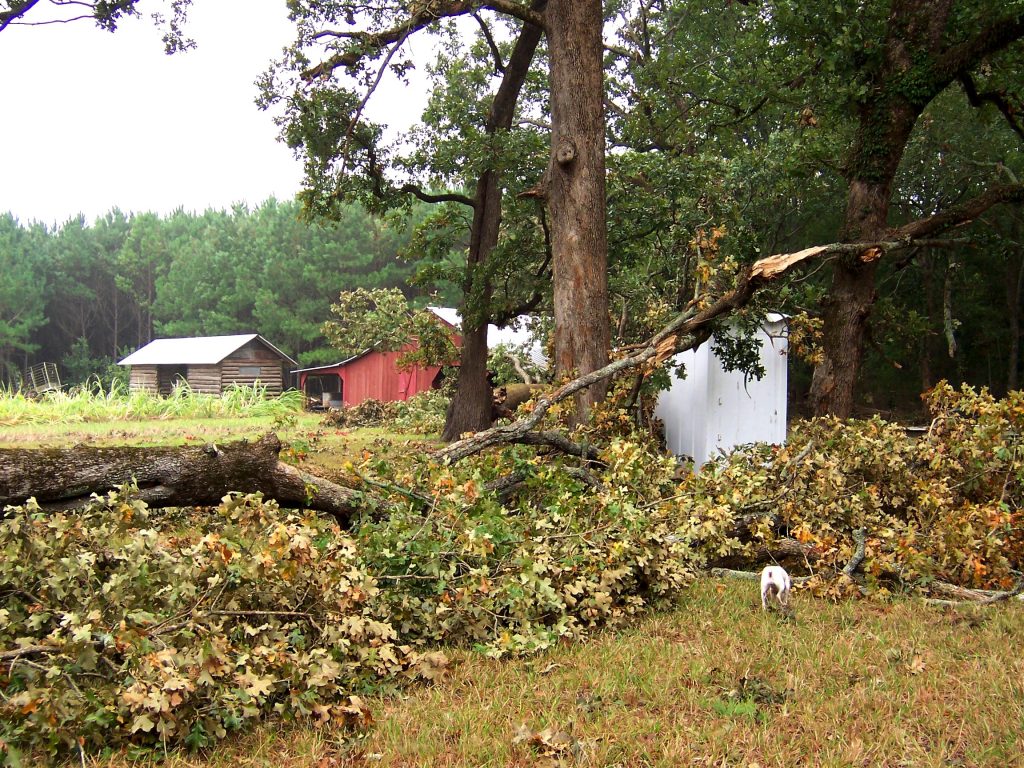 Preceded in death by Both parents and 10 siblings.

Survived by: 3 siblings and one special friend in tears.