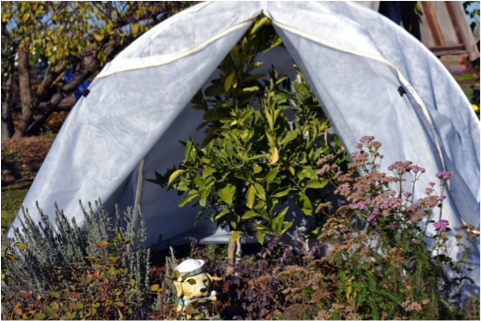 Citrus is a mainstay of the Gulf Coast fruit garden. It is easy to grow and reliably productive. It is also relatively carefree until we get to winter. In mild winters we have very little to worry about. But when winter decides to make an impression, we have to pay attention.

It’s not just about the number on the thermometer. Several factors need to be taken into account:

Stage of dormancy – Although citrus is an evergreen plant, it reaches a stage of semi-dormancy induced by lower fall & winter temperatures. Citrus that has been exposed to gradually cooling temperatures in late fall and early winter (40°F to 60°F for two weeks) will have had a chance to harden off and will tolerate 5 or 6 degrees lower than citrus that has not hardened off. If an early freeze arrives, citrus may need more protection than later in the season since it may not have had the chance to harden off.

Fruit load – Trees with a heavy to moderate fruit load are less hardy than those that have been completely or mostly harvested. This does not mean that you need to rush out and harvest all of your fruit when a freeze is predicted. Early season freezes may come before the fruit has ripened and there is no reason to lose it unless it is absolutely necessary. All of the other factors combined can help you make this decision. The fruits will freeze at 26 – 28 degrees if the duration is four hours or more.

Temperature & Duration – It’s not just the minimum temperature reached, it’s the duration, or holding time, at those temperatures. We often experience a “dip” in temperatures just before dawn. If the duration is short, maybe an hour or two, we have less chance of damage than we do if the temperature drops and holds for several hours or more.

Type of citrus – not all citrus has the same hardiness. The following is a guideline for temperatures at which leaf and wood damage could be expected to occur. This is assuming a tree that is established and hardened off. The minimum temperatures can be withstood for several hours, but not for extended periods of time. Fortunately, we do not experience long periods of sub-freezing temperatures. There are several steps you can take to reduce damage to your citrus. These techniques can be used separately or in combination depending on the conditions that have been predicted.

Water – The best thing you can do for your citrus when a freeze is predicted is to make sure they are well-watered. The soil should be soaked to the drip line of the tree. Cold, dry winds accelerate evaporation rates and chill plants faster and harder. Well-watered soils absorb more solar radiation than dry soils. They release this additional heat through the night – a process called re-radiation. This can give your plants about 2 degrees of protection on its own.

Tenting – I am always concerned when I hear the word “wrapping” used for citrus. Wrapping is where the fabric is gathered and tied at the trunk. I have seen an entire nursery orchard of citrus defoliate and suffer severe twig and branch damage after being wrapped during a freeze when unprotected trees in the area fared better.

Citrus should be “tented” rather than “wrapped”. The fabric should be draped over the tree and allowed to reach the ground where it can be pinned or held in place with bricks or rocks like a 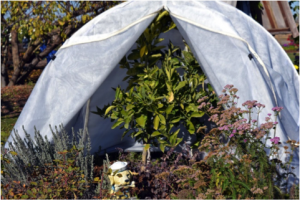 large tent or skirt. This allows for the heat that is stored in the ground to radiate up into the canopy of the tree. This can contribute up to 5°F of protection. It is generally recommended that trees be tented if the predicted temperature is 27°F for longer than a pre-dawn dip.

Tenting material is an important factor. Frost cloth is best because it is specifically designed to do this job. You can buy frost cloth in various sizes and weights; from 1/2 oz to 3 oz. I prefer 1.1/2 oz because it gives approx 7 degrees of protection at a decent price. It is heavy enough to protect sensitive plants, but light enough to handle and store easily. With a combination of a well-watered soil and frost cloth, we can expect about 9 – 10 degrees of protection. That’s a lot, folks. Please don’t use plastic sheeting or plastic tarps. They give little to no protection.

If you do not have frost cloth available, you can use old sheets, towels, blankets, fabric drop cloths, or cloth shower curtains. You cannot predict the degrees of protection with these items, but they do a lot of good. It isn’t always the air temperature that is the culprit for damage; often it is the ice crystals that come with frost. The crystals rest on tender foliage or in the blooms and kill the tissue there. Frost cloth can prevent the crystals from resting on the surface of the leaves or in the blooms (in the case of a late freeze).

Raking back mulch – We have a tendency to think of mulch as an insulator, and to an extent it is. It moderates swings in temperature throughout the year. But bare soil absorbs more solar heat than mulched soil. If a freeze event that exceeds safe temperatures is predicted, rake back the mulch as soon as you can and allow the sun to shine on the bare soil during the day. This heat will re-radiate up into the canopy during the night. You can replace the mulch after the danger of freezes has past. The same applies for turf. Turf is not friendly to fruit trees in the first place, and it definitely does not help during winter since there is less solar gain with turf over having bare soil.

Banking – Banking is a method for protecting the graft. Soil or compost (not mulch!) is mounded around the trunk from the base, past the graft, and as high as possible. Banking can protect the graft from temperatures as low as 12°F – 15°F. The banked soil should be removed as soon as possible after the freeze passes to prevent pest & disease issues. Banking is not necessary for normal frost and light freeze conditions and should only be used if temperatures are expected to drop below the estimated damage temperatures listed above for any length of time beyond the pre-dawn dips.

Foliar Fortification – Kelp-seaweed sprays are helpful. The mechanism by which this works is that the cytokinins (a phytohormone) in the seaweed thicken the cell walls and promote cell division, toughening the leaf surfaces. However, this should be considered a “pre-conditioning” technique and should be done on a regular basis well before a freeze is expected. You can start a program of spraying your citrus with kelp-seaweed solutions every two weeks starting in September. If winter has slipped up on you, start this application between freeze events. It will have time to fortify the plant during our long fair weather periods during the winter.

What if something goes wrong? – The “Ninja Freeze” of March 4, 2014 was a lesson – sometimes the weather centers don’t get it right. If a freeze is deeper than predicted, lasts longer than predicted, or another one sneaks up on us, there are steps we can take to lessen the damage that may have occurred.

First, check the fruit. If the fruit has frozen, harvest it right away and juice it. The juice can be frozen or canned for future use.

Do not rush to prune the tree even if you suspect damage. This dead material can actually help protect the tree from further damage. Wait until new growth starts in the spring; mid-March at the earliest. You can tip back any twig or branch damage once you see where the new growth has begun and dead tips remain.