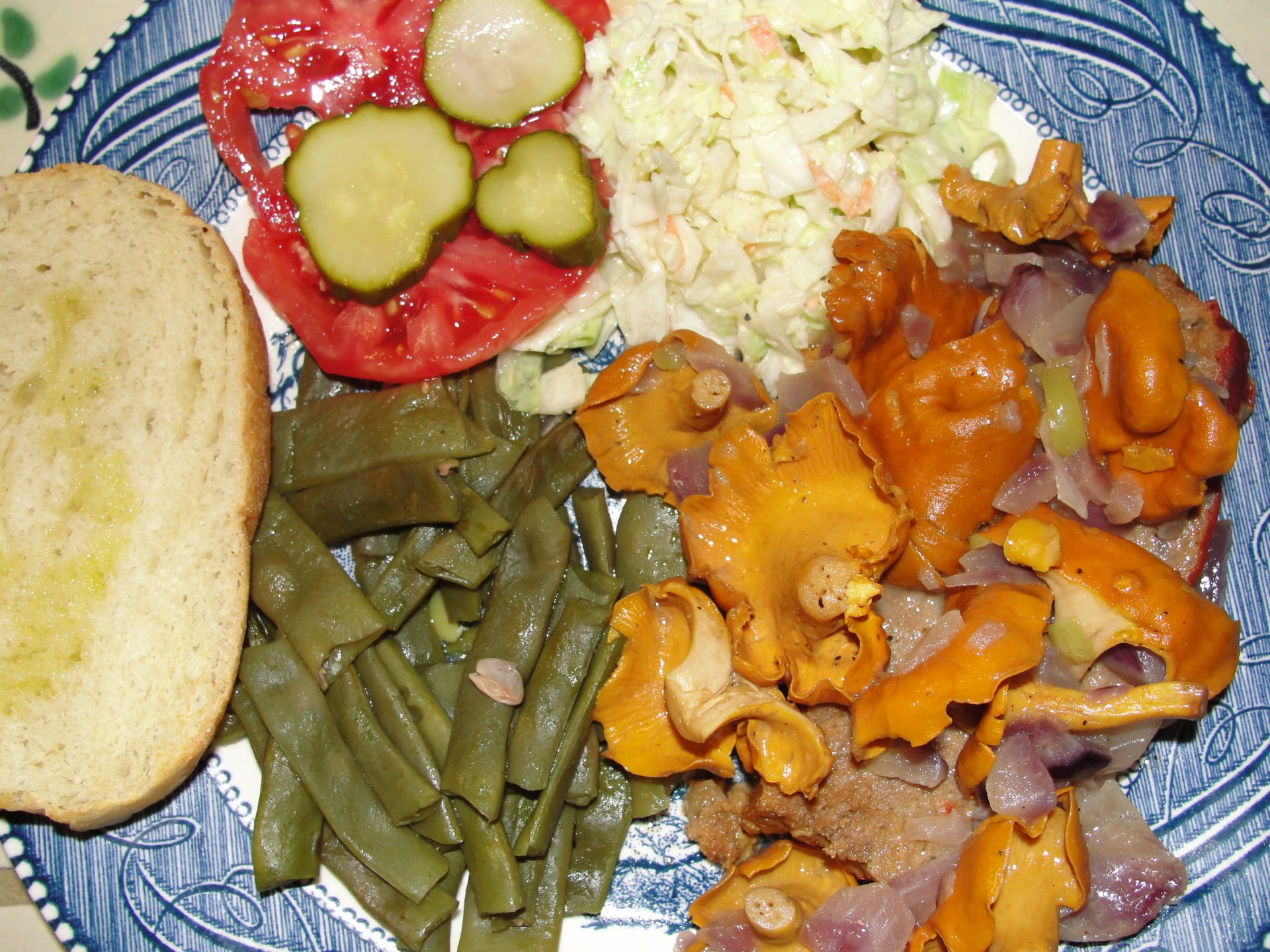 After spending three days and nights in the hospital in Houston getting my new hip, I was ever so glad to get home. I missed my dogs, my garden, and my old house. The folks at Texas Orthopedic Hospital there were as nice as could be, but enough is enough. I had to spend the first week up at my parent’s house until I could master the steps up to mine. Even though I promised my mom I’d stay with them two weeks, I bolted after a week so the dogs and I could stay at my house and garden to guard the sweet corn crop at night. Without the dog’s vigilant presence it would have been a raccoon banquet by night and a crow feast by day. 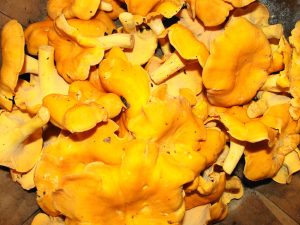 Spring had been pleasant and moist up until the surgery. Then just before I returned, it came a 4-5 inch downpour in Arcadia complete with thunder, lightning, and flooding. My vegetable gardens which had all been tilled before I left had heavy erosion and my once beautiful corn crop was flat on the ground when I returned. It sure made the pastures, lawns, and weeds grow however. My dad made bumper crops of hay off his first cuttings and my lawn quickly looked like I had abandoned the place entirely.

But like every event in nature there was a bonus. I hadn’t harvested a crop of wild golden chanterelle mushrooms in three years as we hadn’t received the necessary deep soaking during the summer that they require to produce. I was beginning to wonder if they still existed on the roots of my old oaks in my hardwood forest next 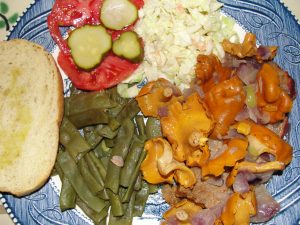 to the picnic grounds. Luckily my dogs and my fancy wheeled walker (courtesy of my generous sister-in-law Ann) took a walk along my pines behind the barn one day and I couldn’t help but notice the abundance of what superficially looked like golden-yellow scrambled eggs popping out of the ground.

Ever since I was a kid I wanted to be able to live in the wild, harvesting everything that was edible if I needed to. I always had a pretty good grip on what was edible too, except for mushrooms. It all seemed so confusing. But then one day while teaching horticulture at LSU one of my students helped solved a piece of the mystery. His girlfriend was from France and her family was there to visit. They wanted to see what wild Louisiana looked like, so I took them to a bottomland hardwood forest along the Mississippi River. They immediately started yapping in French and picking orange-yellow mushrooms. I panicked and thought this isn’t going to end well. They picked so many that I had to make a basket out of a dwarf palmetto frond in which to carry them. 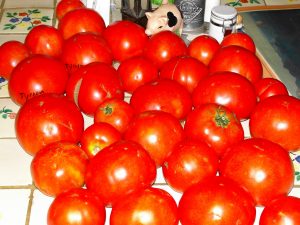 When we got back to their apartment they started cooking them up in assorted ways and assured me through translation that they were edible. Well how the heck did folks from France know what was edible in the U.S.? I frantically called a friend working on a Ph.D. in plant pathology and asked her if these could be the golden chanterelle mushrooms they insisted they were. She came and looked and said she thought they were correct. It turns out this fungal delicacy is native to both Europe and the U.S. I remembered some being sautéed in butter and served over steak (beef, not horse). They were delicious. I had never been a fan of bland button mushrooms and was surprised at the difference in texture and taste. My family was raised eating no mushrooms of any kind, fresh or otherwise. 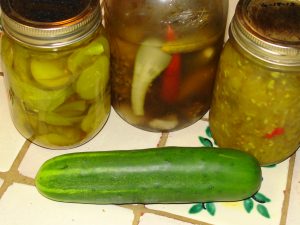 But once I moved back to Texas, I became unsure again about them. I didn’t think much about it until a protégé of a local mycologist showed me some one day and asked if I’d ever eaten them. I said yes, but never really knew how to identify them. He patiently showed me their ruffled edges and explained they didn’t have gills typical of most mushrooms. Their color, location in hardwood forests, and fact that they weren’t attached to rotting wood helped distinguish them from the only thing that was even remotely similar. So as soon as they popped up near my house years ago I realized they were the same and have been eating them since.

Now realize that I couldn’t even walk unassisted when I noticed the recent crop. I was so happy to see them and so eager to eat something homegrown that I gingerly dropped to the ground and picked enough for several meals. Although getting back up was extremely difficult, I carried them to my parents and proceeded to eat them four meals in a row. I think my mom tasted them but my dad won’t eat anything unusual, especially if he suspects I’m trying to kill him! One day I sautéed them in butter with homegrown onions and ate them over meatloaf. Then another day I sautéed them in olive oil with fresh onions and banana peppers and topped an open faced chicken salad sandwich with them. Now that was tasty. 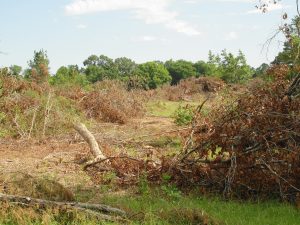 When I bragged to several of my friends about eating golden chanterelles, they flipped and said they’d never risk eating wild mushrooms for fear of poisoning themselves. How could I be sure they weren’t poisonous they asked? I told them I knew for the same reasons that I knew which people were my friends and which ones I suspected of being threatening. I learned exactly how they looked and acted. It’s the same way all humans learned which foods to eat. Once you know them, they are good forever. If you don’t know them, you avoid them unless you learn otherwise. And if they are toxic, you learn them and stay away from them. Not eating earthy chanterelle mushrooms would be like avoiding green beans because I read castor beans were toxic!

More good news followed as most of my Sweet G-90 corn stood back up again. We ate delicious corn on the cob and cream style corn most of the month. My mom also filled the freezer as usual. Although I only had four tomato plants, her house stayed full of tomatoes all month, including the countertops and baskets on the floor. My production from Florida 91, BHN 589, and BHN 602 was off a bit but my Tycoon from Dr. Parsons was a winner. I’ll certainly plant more next year and 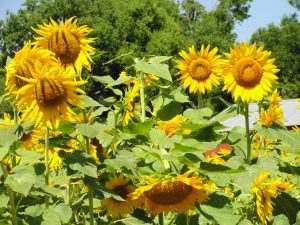 hopefully a fall crop in a few weeks.

I only planted a single hill of cucumbers this year but luckily my favorite hard working mother-daughter gardening team (Annie Hoya and Jo Ann Carter of Nacogdoches) blessed us with a case each of bread and butter pickles and pickle relish. My mom took what I grew and made kosher dills.

I knew I’d need a ray of sunshine so I planted gray striped sunflowers where I tilled my sugar cane under. I’ll eventually turn it into a patch of Lent lilies, but it did make everybody in Arcadia smile for a bit as they bloomed for several weeks.

My golden-eye cream peas are now ready to pick, but my mom and dad will have to handle it, as I still can’t bend over much. My black crowders are several weeks behind. My 20 acres of mixed timber got harvested and I’m well on my way to having 20 acres of longleaf pine. The mulcher, raker, and dozer should show up any day to prepare it for planting. And finally my crape myrtles have come into full bloom which is a much anticipated site for me. I started all of them from cuttings and am particularly proud to see them growing up. Ever since I was a kid I’ve loved peeling the exfoliating bark from the graceful trunks while inhaling the delicate scent of their blossoms. 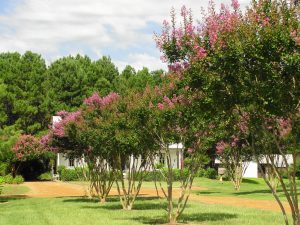 Unfortunately it hasn’t rained another drop in Arcadia since the flood and things are now drying up. That’s quite OK however. It was a great month and I’m just glad to be home and alive. Until next month, rest in peas. -Greg