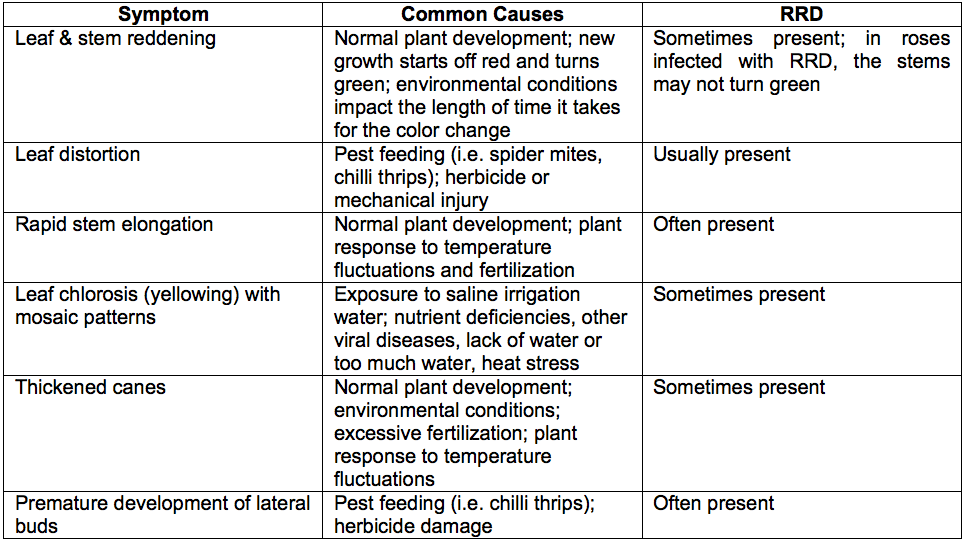 Rose Rosette (sometimes referred to as Rose Rosette Disease, “RRD”, and/or Rose Rosette Virus, “RRV”) was first described in the early 1940s and has become one of the most devastating and least understood diseases of roses.

For almost 50 years after the first sighting, little progress was made toward identifying the cause of rose rosette disease. In 1988, scientists identified a connection between the eriophyid mite, Phyllocoptes fructiphilus, and plants demonstrating RRD symptoms and that year concluded that this wingless mite was the vector for infection – although the disease process itself remained a mystery. In 1990, scientists became suspicious that RRD was caused by a virus. Confirmation that RRD is caused by a virus came in 2011 (Laney, et al, 2011).

RRD was first discovered in North America in 1941 (Manitoba [Canada], Wyoming, California and Nebraska) and expanded to the eastern and Midwest states. Until last year, RRD was a rarity in the South. That has changed.

Roses demonstrating symptoms of RRD have been found in Dallas and San Antonio in alarming numbers in the last year. In June 2012, a plant specimen demonstrating RRD symptoms was brought to a meeting of the Houston Rose Society for identification and by September 2012, two more instances of RRD in the landscape were identified. Plants with RRD symptoms have been found in landscapes and at retail centers in San Antonio and in numerous landscape settings (public and private) in north Texas.

Transmission by mites. The wingless eriophyid mite is one way that healthy plants become infected with the RRD virus. The virus-carrying mite is blown by wind or dislodged by rain from an infected host plant to a new healthy plant. Sometimes the mites hitch a ride on other insects or birds as a way to get from plant to plant. By feeding on the healthy plant, the mite injects the virus.

Plants inoculated with RRD via mite transmission typically display symptoms of RRD within 90 days of inoculation. The summer months are the peak time of year for mite activity.

Transmission by Pruning. It is suspected that the virus can also be transmitted in other ways. Pruning on a bush infected with RRD and then pruning on a healthy bush has long been thought to be a method of transmission of virus from plant to plant. This is an excellent reason for gardeners to disinfect their pruning equipment after working on a plant (especially one exhibiting symptoms of any disease process).

Transmission by Grafting. A third method of disease transmission is by grafting. The species rose, Rosa multiflora, has been associated with RRD for decades. Rosa multiflora is also a rose that has been commonly used by nurserymen as the rootstock for commercially grafted roses. If a rose is grafted onto rootstock infected with RRD, the resulting plant may display RRD symptoms.

Some symptoms of RRD resemble other rose maladies and it is important to understand that one symptom alone does not confirm the presence of RRD. RRD is often confused with roses damaged by herbicides, plant growth inhibitors, pest damage and/or have a nutrient deficiency. For these reasons it is important not to panic if some RRD-like symptoms appear in your roses. Confirmation of the correct source of disease-like symptoms is extremely important.

It is also important to understand that RRD symptoms can vary between roses of different parentages. RRD symptoms can also vary depending on the season and environmental conditions, as well as the stage of plant growth at the time of infection plant.

The following chart identifies symptoms common in RRD-infected plants. Some of the same symptoms can result from other causes. Just because you see a symptom or two from the following chart – does not mean that you have RRD in your garden – as these symptoms are commonly seen caused by other things. 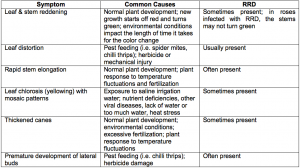 However, RRD causes some very specific symptoms that taken in context with the above help identify and confirm the presence of the virus. The following unique symptoms are prevalent in roses infected with RRD: 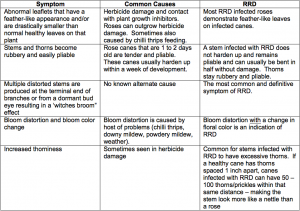 See attached illustrations of the rose canes infected with Rose Rosette Disease. These canes were removed from two rose bushes in North Texas.

Treatment. There is currently no known cure for Rose Rosette Disease. Because of the possible infestation of healthy roses, it is recommended that rose bushes with confirmed infection of this viral disease be dug up, bagged and sent to a landfill or burned. Do not compost plant material that has symptoms of Rose Rosette Disease.