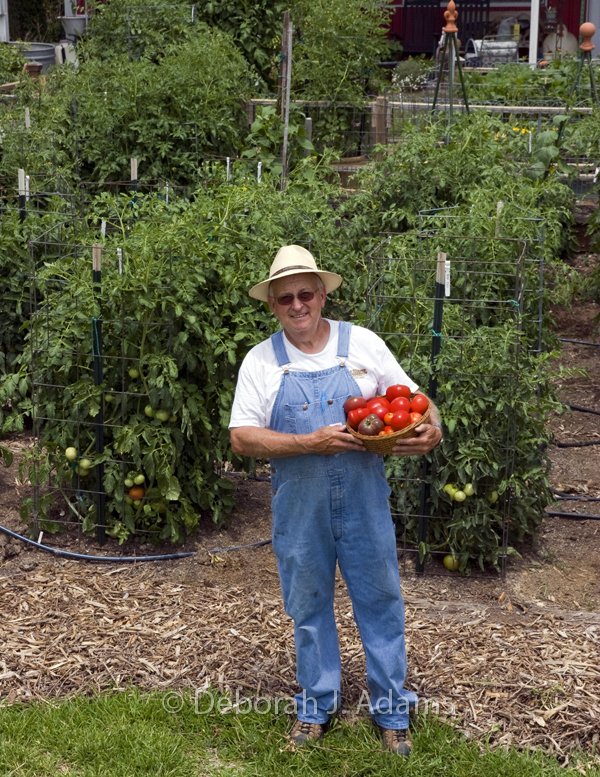 Spring Garden enthusiasm is just around the corner. Looking back at last year’s warm season garden there were a few successes, plenty to eat and give away, but there were also some old favorite varieties that were missed. Of course I’m mostly thinking of tomatoes, but there are some beans, squash and cucumbers that have been winners as well. This is going to be the year that we concentrate on the “tried and true” with only a few new varieties in the garden.

Most of the others will be heirlooms. Not because they’re so easy to grow and productive; they’re susceptible to most diseases, and the stinkbugs always concentrate on the tastiest tomatoes. They will be in the majority because heirlooms often have great flavor and texture. Texture is an often overlooked factor. I like them firm enough to slice with a melting quality—hard and or grainy tomatoes are a turnoff for fresh use.

The varieties from last year that may be planted again include Rosella, a burgundy red cherry with acidity and complex sweetness that really gets your attention. It was also a heavy producer so two plants should be sufficient. Caiman F1 hybrid was touted for organic production. I presume it combines some pest resistance with productivity and quality. It seemed to have all of the above and it was a nice size slicer—2-4 plants likely. We’ve tried Gregori’s Altai several times with complete failure. On one occasion, the plants appeared to have been mislabeled. Last year however, it was productive with large, delicious tomatoes—2-4 plants. Heirloom Green was a surprise—the medium-size tomatoes were large enough to slice and were very tasty—like a good red one, only green and not just “refreshing” like Green Zebra. With my eyes closed I would have thought it was a good red heirloom—1 plant just to make sure I wasn’t dreaming.

The old favorites list will be fairly extensive. In addition to Champion II we will try to include Cherokee Purple—a big, sweet purplish-red tomato and/or a similar variety, JD’s Special C-Tex Early Black—likely 1-2 of each. Black Krim, early with the complex smoky-sweetness typical of most black tomatoes. The even better Russian heirloom—Black from Tula– could find a spot in the garden—2 each. Marianna’s Peace is a monster big, reddish-pink tomato so good you’ll want to lick the juice off of the plate where these babies have been sliced up. Get the butcher to grind some brisket or buy the leanest premium burger you can find and grill them medium-rare with a thick slice of Marianna’s Peace, mayo, mustard, romaine lettuce, two slices of cheddar or embellish it however you like it for a “burger experience” you can tell the grandkids about when they come to visit you at the retirement home. Better yet, take a picture of the burger with your phone and send it to them—it might make an impression. Persimmon is sort of a persimmon-colored version of Marianna’s Peace. It will make for an equally profound memory whether it’s sliced up on a plate, sprinkled with salt and devoured or lapping over a juicy burger. Momotaro (maybe named Tough Boy) is a smallish, pink slicer with wonderful flavor. Try to get it out early as it doesn’t produce well in hot weather. We really missed Juliet and Viva Italia in our garden last year. Juliet will bury you in small, elongated fruits that are quite tasty fresh and quite attractive canned in jars-although small. Viva Italia is a larger tomato, also very tasty. We typically describe it as a Roma with juice and flavor. It also makes a beautiful canned product. Either one will make a knockout, delicious fresh salsa. The best Italian slicing type we’ve grown is Tomande. It has the typical green shoulders that Italians like (why?) but the bottom 2/3rds is red and juicy.

Rosella would likely suffice for our small tomato needs but Sungold is the flavor standard that all of our tomato tasting is based on so we need at least one plant in the garden. BHN 968 is a prolific red cherry variety with nematode resistance (root attacking round worms) that we hope to revisit. Jaunne Flamme is bigger than a cherry but hardly a slicer. Regardless, the French heirloom is productive and delicious.

The lower garden has seen too many tomatoes for too many seasons so the tomatoes will have to go elsewhere and the lower garden will be planted to sweet corn with one of the Mirai varieties. This series is one of the augmented supersweets—not just sweet, but also tender.

Green beans can be just green or they can be rich and green. The Italian flat pod varieties are especially flavorful. Jumbo is an old favorite that needs to see garden time again. Cooked up with bacon and Creole seasoning then finished with heavy cream it will be almost as good as Grandma made.

Finally Beit Alpha or Mediterranean cucumbers are a favorite for fresh use and for chip pickles. We may also include a pickling type for our favorite Bread and Butter pickles—they seem to turn out a bit crisper.