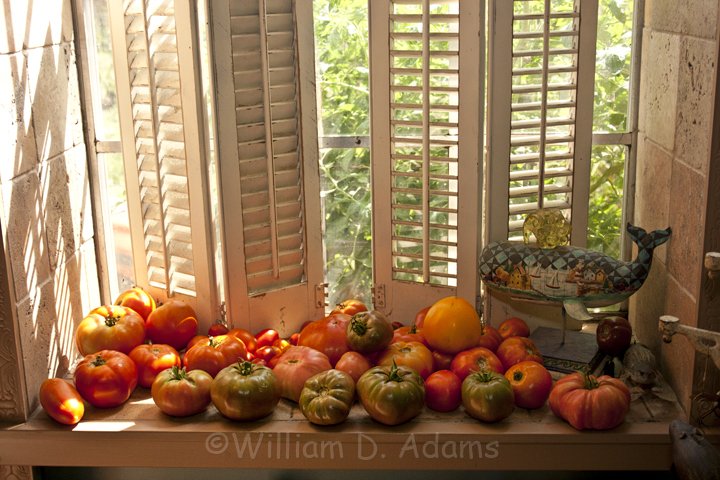 After too much rain I feel somewhat petty whining about tomato setbacks when there are so many people dealing with flooded homes and lost loved ones in Texas. We’re fortunate to be on the higher end of a sloping property that doesn’t flood, but we still have rivers of drainage water flowing through- soaking beds and washing valuable compost into the field. Early Blight fungus, flower thrips (may cause blooms to drop/damage tender growth), snails and a myriad of other maladies have besieged the garden. I hate to bad-mouth rain (I still remember the dry years) but it would sure be nice to spread it out some.

I’ve stocked up on a variety of pesticides—mainly to deal with diseases like Early Blight. Most of them are organic or low-toxicity, but it’s been difficult to find a dry day or two to get out the sprayer. In the meantime I’m putting out sticky traps (the yellow and blue ones) to intercept thrips and pulling out diseased leaves. Fire ants seem to pop up magically after a rain. We’re using ant bait with spinosad that is approved for the garden (organic). Spider mites aren’t usually a big problem in a wet year but don’t let your guard down. I recently discovered an infestation on some tomatoes growing in an old stock tank. Looking around I found a weedy tomato relative upwind from the plants that was covered with mites. These tiny pests often survive on weeds and blow in with prevailing winds. Wettable sulfur sprays are a good organic alternative to control mites. Examine your tomatoes frequently for hornworms. BT or spinosad work if you catch them when they’re little. If they get too large use a machete—just kidding, a sharp pocket knife will suffice. Hornworms with parasitic wasps should be left to mature their enemy. Also watch for Leaf-footed stinkbugs and the sneaky shield-shaped stink bugs. They always find the best tasting tomatoes and their feeding leaves corky tissue under the skin.

To reduce losses from fruit rot, I’m harvesting when the tomatoes are at least half-colored. Unfortunately, too much rain means the flavor is diluted leaving even the varieties we know to be delicious a bit washed out. A little bit of salt helps to improve the flavor and the BLT’s have been yummy—we just know they could be yummier. Last winter was so mild we have peppers coming back. These Corno di Toro Rosso sweet peppers are going in Deb’s Sweet Pickle relish.

Lots of 4-4-3 AG Organic and a little calcium nitrate (one or two tablespoons per plant) have resulted in mega plants growing out of the cages. In some cases the foliage is too dense making it difficult to find the tomatoes without a lot of searching. I’ll definitely start with less fertility next year but I’ve got to blame the excess rainfall for some of the problems—disease, certain insects (Western Flower Thrips riding the fronts from the West Coast) and diluted flavors. Strong growth makes for lots of tying to keep the tomatoes from breaking off where they’ve escaped the cages (the orange bracelet isn’t a fashion statement it helps to keep the mosquitoes off). This year I’ve been using a green twine that comes in a container with a clip—and best of all, a cutter. Just pull out the length of twine you need and pull it across the cutter.

Our intercropping efforts have worked fairly well this year. We’re using pole beans and cucumbers between the tomato cages in the new tomato patch and they’re beginning to intertwine to the point it’s looking like we should have fertilized less or spaced wider. Still getting lots of each crop with nice basil hedges in front—the harvest is just a bit frustrating. In the lower garden we’ve planted sweet corn in solid blocks where we had tomatoes last year, and some of the cages have sweet corn planted in blocks between the tomatoes. The tomatoes have been so vigorous they’re reducing the corn potential. Also the early problems with birds pecking out the small corn plants made getting these blocks established a real chore. I’ve tried a number of corn varieties this year but think I’ll stick with the Mirai series in the future. Unfortunately corn ear worms love them all. We were able to reduce them somewhat with sprays to the silks of BT (Bacillus thuringiensis) and spinosad. Debbi reluctantly agreed to let me grow what I thought was going to be a vining zucchini—instead it has turned into a porch pumpkin. Rather stylish I think. It looked so good I decided to plant a Naked Seeded Pumpkin on the other side of the stairs.

Squash vine borers and squash bugs are always a problem. This year I’ve been taking one of the pre-mixed hand sprayers out with me to check the squash. The vine borer moths are orange and black—rather easy to see but too fast for me to hand snatch. The sprayer gives me more reach and I’ll make up my own when the factory load is used up. If they get by and lay eggs I cut into the stems and poke holes in them—too much trouble for a big squash patch but easy enough for a few plants. Squash bugs crawl around feeding on the stems and causing them to wilt and eventually die. I’ve also been spraying these by pushing back the foliage and peering into the interior. The insecticidal soap sprays seem to work but some sprays are available with pyrethrins that should be more effective. Just be sure to spray in the evening (when there are fewer bees) or at least don’t spray the bees as they pollinate the flowers. It’s not only been raining a lot, it seems like it must be raining snails and slugs. I’ve been using the iron phosphate baits with some success. The same type of bait with spinosad works even better. Don’t expect to totally eradicate them—they make roaches look like “weak sisters”.

On another more positive note we’ve had a good peach crop in spite of the weather. These peaches were from seedling trees that came up under a giant cottonwood. It’s where I tossed some seed from the original grafted tree (Mid-Pride) during a peach jam-making enterprise years ago. If someone asked me if planting a peach tree under a cottonwood would be a good idea, I doubt my response would have been particularly tactful. As it is, the seedlings (3) are on a slope (good drainage) and the cottonwood may actually be helping to use up some of the excess soil moisture. It’s also close to the raised bed vegetable garden so I remember to fertilize on occasion. I severely thinned the peaches and sprayed a few times for curculio and brown rot control. Todays’ peach varieties are “bred up” for want of a better term. In other words, the good genetics are somewhat concentrated. This is not to suggest that planting an improved variety, grafted tree isn’t a better idea but your chances of getting a decent peach seedling are pretty good, especially if the original tree was adapted to the area. Peach seedlings from the grocery store may not be so successful since they typically come from higher chilling regions of the country.