Tomato Season is Winding Down 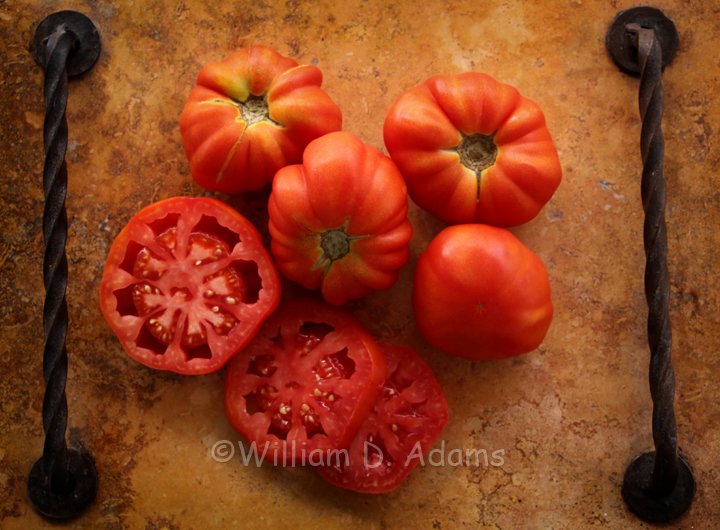 The tomato season is winding down—stinkbugs and Early Blight are winning the battle. Even if I sprayed every day, the high temperatures limit fruit set. We’re still getting enough for the occasional BLT and for fresh salsa—actually we were growing tired of every counter top being covered with tomatoes. You may remember from the June Blog where I expressed a concern about whether tomatoes harvested when they first show color were as tasty as a full red, vine ripe tomato. As far as I can tell, genetics still makes the difference. If it was a great tasting tomato like Gregori’s Altai, it tasted great when full ripe even if you picked it at pink blush and with a lot less exposure to stinkbugs, etc. A tomato with average to good flavor like Tycoon was still average to good after becoming full ripe on the counter. A search on the Tomatoville website seemed to confirm that even the most dedicated growers of little known heirlooms pick early to save their precious harvest from the vagaries of maturing in the field. To a certain degree this means pick early/spray less.

Most of our forty-three varieties had been harvested and tasted by mid-July and a lot of last year’s seed order will see the inside of a trash can-though not as many as in some years. The frequent rains early in the season made me doubt my earlier impressions of certain varieties. There does seem to be a “flavor dilution effect”. Once again though, the really good ones (genetics again) stood out and were front and center with nice acidity and complex sweetness. I hope you enjoy seeing photos of some of our favorites plus a few “also rans”—for those of you new to the blog, words in bold will reveal a photo with a simple left click. Mortgage Lifter got planted late but it did manage to set some huge tomatoes. Not the prettiest things in the world but tasty. German Johnson (plain-leaf, not potato leaf GJ) looked a lot like Mortage Lifter—maybe a little smaller and some were oblong but equally delicious. Beauty King started out to be a beauty and the flavor was excellent but with hot weather, it turned into a beast. Big Beef was a good main crop variety. Sprinkle a bit of salt on any of them and you would swear Grandma grew them. Speaking of Granny, Granny’s Pick was very tasty, sort of a hollow stuffer type. However, It was also very susceptible to Early Blight and it’s not likely to see our garden again. Heirloom Green was a surprise. I planted it intending to fry some but it was delicious fresh—great acidity but not too tart and just the right sweetness. It was even good in salsa. Indigo Kumquat is one of the varieties with some blue genetics. It was very productive but rather ‘meh’ in flavor. Lots of them hit the ground so it may volunteer but it won’t be planted on purpose again. Kewalo is a smallish variety developed in Hawaii. It is a good heat setter and reported to have some nematode resistance. It also tastes good—a bit small for BLTs or burgers but perfect for sliders. Matina was even smaller than Kewalo—like golf ball size but it was very delicious—skins were on the tough side but nothing I couldn’t bite into. One of our favorites this year was a cherry tomato-Rosella. It produced in large clusters of burgundy shaded fruit that were scrumptious—one of the best tasting along with Sungold. Sunpeach was another very productive cherry but the flavor was only average.

As the summer garden continues to brown out there are still a few bright spots. The pickling cucumber Regal F1 is making lots of cukes and I’m thinking we need one more batch of Bread and Butter pickles. I’ve got a couple of pumpkins about to mature. How exciting and I’ve got three more months to decide what to do with them! Zucchini and Crookneck squash are still producing (Deb already has a bunch of squash casseroles and eggplant parmesans in the freezer) and I have a few melons growing. It’s time to begin cleaning out the dead tomato plants and prepare for the fall garden.

I took a break and abandoned my garden for a day to join Region V garden writers at the annual field trials at the Dallas Arboretum and Botanical Gardens on June 24th. The bulk of the audience was made up of landscapers anxious to see the latest flowers and foliage plants for Southern Landscapes. Summer was definitely in charge as it was a rather warm day with not a cloud in the sky. Regardless I ventured out with my trusty Canon DSLR/fill flash and did my best to capture images of some of the more impressive trial plants. In no particular order these included Soiree Kawaii Lavender Vinca—small flowers but lots of them over a long time and resistance to Aerial Phytophthora disease, Coleus Mascara Mesh was eye-catching with its striking foliage, Coleus Under the Sea Fish Net was equally striking, Gomphrena Fireworks loves the heat and blooms like crazy, Coreopsis Leading Lady Lauren was a bright spot in the trials, Melampodium Million Gold was another and Sun Dome Pink portulaca made a striking pink matt in the trial garden. Some of the garden writers got away before we could get a photo with the outstanding horticulture and media crew from the Arboretum but here are the few we could round up (L to R-Terry Lendecker, Dallas Arboretum VP of Advertising and Promotions, Steve Moore, Calloway’s Nursery, William D. (Bill) Adams, GWA Region V National Director, Shelly Cramm, Garden in Delight, Dave Forehand, Dallas Arboretum VP of Gardens and Jenny Wegley Dallas Arboretum Director of Horticulture (not pictured Steve Chamblee and Sharon Beasley). In spite of the heat it was a most informative day and most of the afternoon was spent in an air conditioned auditorium with dazzling Power Point presentations.