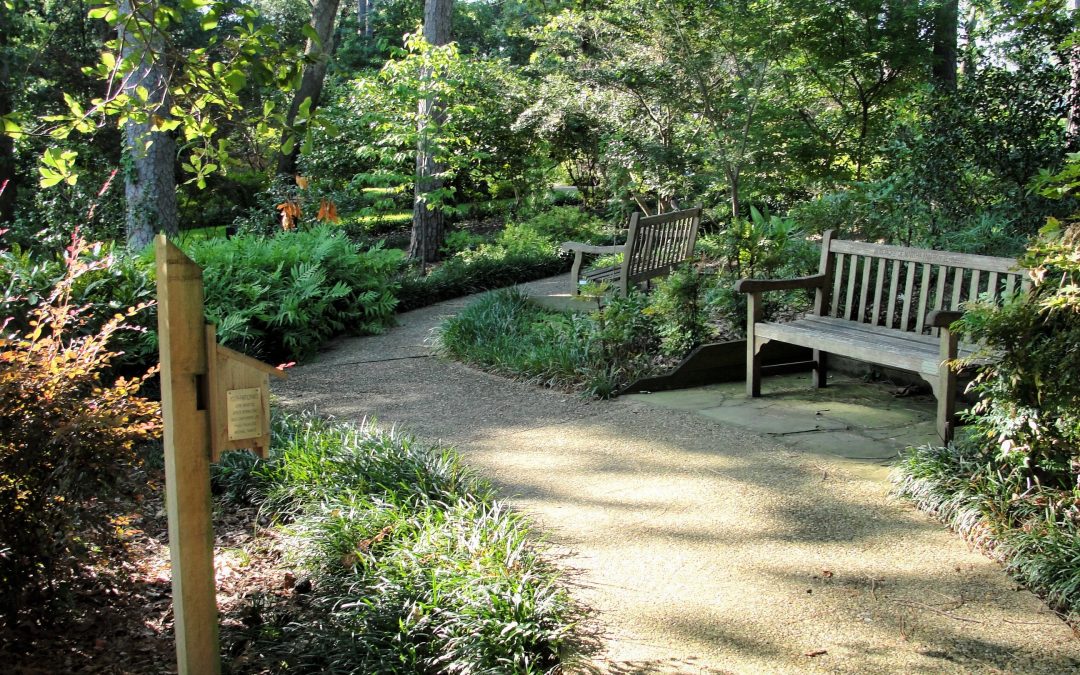 Nestled at the south end of the Tyler Rose Garden are three unique gardens officially designated the Tyler Botanical Garden. Although the property is owned by the city and is within the Rose Center complex, the Smith County Master Gardeners have designed, funded, and maintained these award-winning educational gardens for years. The Heritage Rose Garden, the Shade Garden, and the IDEA Garden each have their own distinct theme.

The Heritage Rose Garden in the southwest corner was originally established by the Tyler Lions Club in the 1970’s as a sensory garden. In 1986 the Gertrude Windsor Garden Club adopted the garden and transitioned the focus to highlight historic old garden roses in a landscape setting. In 1993 Smith County Master Gardener volunteers became partners in the Heritage Rose Garden and in 2006 became the sole caretakers.

The Heritage Rose Garden is a beautiful, old-fashioned cottage garden displaying antique roses and Southern heirloom plants that would have grown in our grandmothers’ and their grandmothers’ gardens. The roses are allowed to grow into large bushes with only light pruning. “Texas tough” perennials and reseeding annuals are fitting companions to the old roses, all of which are managed based on Earth-Kind® landscaping principles. Heritage time-tested roses are less prone to diseases and are typically easier to grow and propagate than modern hybrid tea roses. The Gertrude Windsor Garden Club continues to support the Heritage Garden and is responsible for the arbor welcoming visitors to the Tyler Botanical Garden.

The Shade Garden is the largest of the three demonstration gardens. One thousand feet of paved pathway meanders through this two-acre grove of mature trees connecting the IDEA and Heritage Rose Gardens. The Tyler Camellia Society originally designed and planted the area appropriately named the Camellia Garden in 1960. In the early 2000’s the Smith County Master Gardeners conducted hosta and fern trials in beds that were named the Shade Garden. They partnered with the Tyler Men’s Garden Club and planted Japanese maples and more camellias.

Hundreds of azaleas, camellias, and Japanese maples inhabit the garden and are complemented by an abundance of unusual woody shrubs and herbaceous perennials that thrive in shade. Fall color on the maples peak in late November to early December, the camellias shine from late fall to early spring, and the azaleas begin their show of blooms in late March and early April. A bubbling fountain, an array of benches, and a number of picnic tables provide an enchanting, peaceful, and tranquil environment where visitors to the Shade Garden will experience “beauty in every season.”

The IDEA Garden was a 1996 brainchild of former Texas A&M AgriLife Extension Service horticulturist, Keith Hansen, and the late Sue Adee, Smith County Master Gardener extraordinaire. An acronym for Innovate-Demonstrate-Educate-Apply, this multi-functional garden was dedicated in 1999. This garden has received many awards, including the Search for Excellence Award at the International Master Gardener Conference.

The IDEA Garden features a “backyard” setting, much like you might find at any suburban residence. It is designed to stimulate ideas for use in average homeowners’ gardens or simply for the enjoyment of the casual visitor. A pergola and benches welcome visitors to sit and absorb the garden’s beauty. The garden features more than six hundred varieties of flowers, trees, shrubs, grasses, and ground covers. Some are new or currently under-utilized, but all are adapted to the East Texas area including those designated as Texas Superstars by the Texas A&M AgriLife Extension Service.

The Tyler Botanical Garden is open from dawn until dusk seven days a week and admission is free.

Greg Grant is the Smith County horticulturist for the Texas A&M AgriLife Extension Service. He is the author of Texas Fruit and Vegetable Gardening, Heirloom Gardening in the South, and The Rose Rustlers. You can read his “Greg’s Ramblings” blog at arborgate.com and read his “In Greg’s Garden” in each issue of Texas Gardener magazine (texasgardener.com). More science-based lawn and gardening information from the Texas A&M AgriLife Extension Service can be found at aggieturf.tamu.edu and aggie-horticulture.tamu.edu.