The Shady Ladies of the Garden 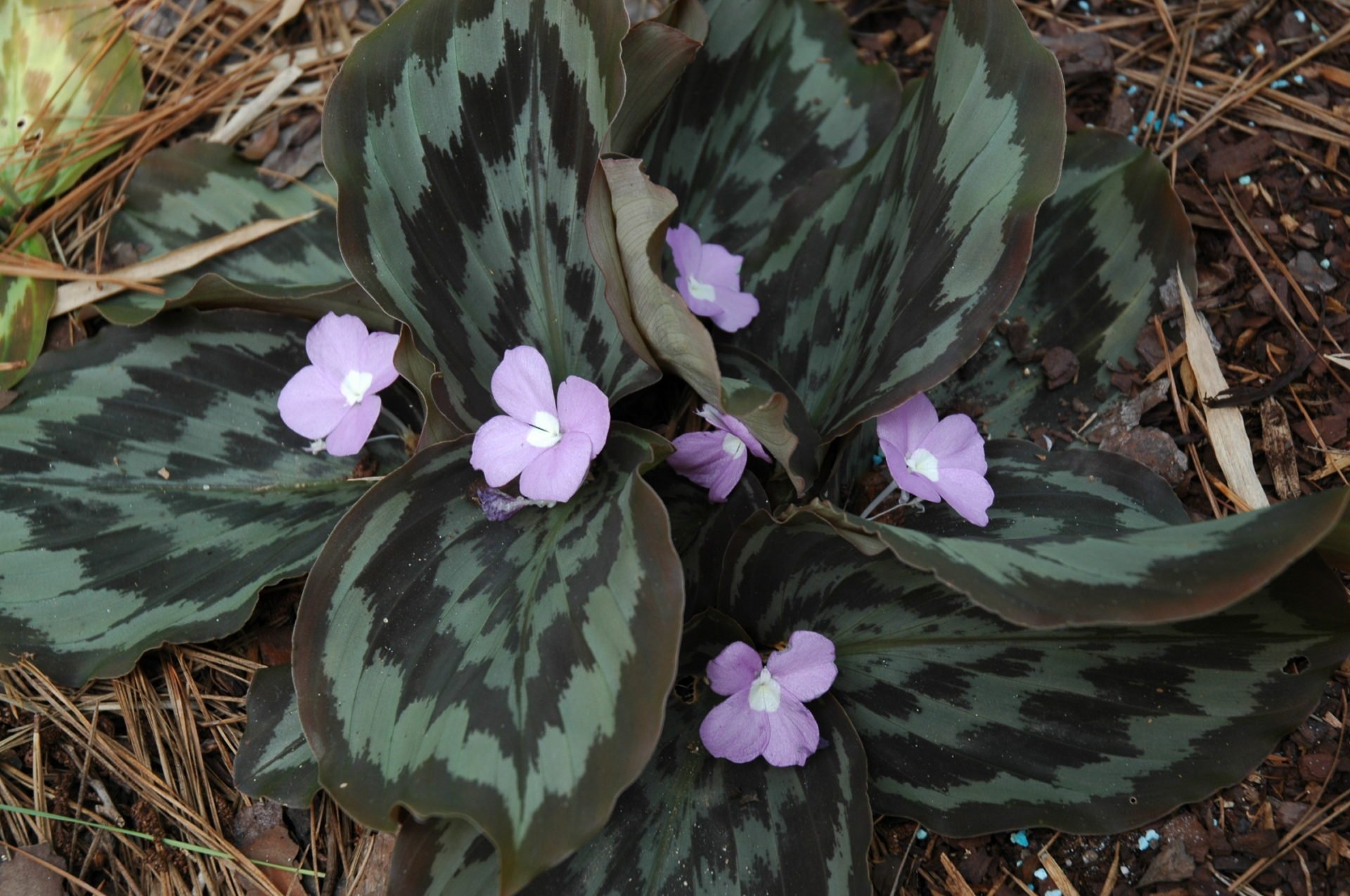 Gardens are all about light and the less light an area receives; the larger the leaf surface is to capture those precious rays of sunlight for photosynthesis. Areas receiving filtered or short windows of direct sun have this protected exposure due to the large trees shading the area. When gardening around and under large shade trees we not only experience competition for light, but also root competition for soil space, water and nutrients.

We know it is impossible to grow impatiens under large trees without watering every single day! The best choice for summer color is of course Begonias, which die frequently from overwatering. Planting Begonias in prepared soil among tree roots allow both to thrive since Begonias prefer to dry out in between watering. 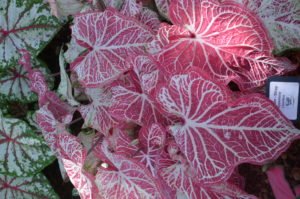 There are so many choices with Begonias; bedding Begonias, Dragonwing Begonias, Rex Begonias, Rhizomatous and Cane Begonias, all of which are perennial and can return from the roots. Bedding Begonias with green leaves and pink or white flowers (show up best in shaded gardens), while bronze leaves with red flowers show up much better in more sunlight. Remember when gardening in shaded areas, always use white or variegated foliage as white reflects the sunlight and moonlight back to the eye. Bronze leaves with red flowers or plants with dark foliage has no reflection capacity and just disappear into the shade. 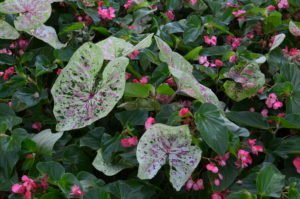 Caladiums provide colorful foliage to complement Begonias as they grow from a tuber which makes them the perfect candidate to thrive among tree roots. There are two types of Caladiums, Fancy Leaf which are heart shaped and need some shade (less than 5-6 hours shade) and Strap Leaf or angel wing (more than 6 hours) that can take full sun. When Caladiums produce spathe-type flowers they need to be cut down to the ground as this takes away from leaf production which is why you are growing them. 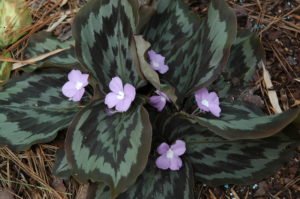 Peacock gingers (Kaempferia sp.) are lovingly referred to as the Hosta of the South. We do not have the winter dormancy and duration of chill to successfully support the northern Hosta, so why not plant these precious, patterned, pretties. Kaempferias grow from rhizomes and go dormant during the winter, normally January or February. Since they grow in deep shade (not direct sun) it takes longer for the soil to warm up for them to sprout. The rhizomes are why they thrive among the tree roots of our garden giants, as storage tubers hold water and nutrients but still require water if low rainfall occurs. If you have Kaempferias in too much sun, they will curl their leaves over the top of the plant for protection until the sun retreats. Kaempferias produce lilac or purple iridescent flowers throughout the summer. 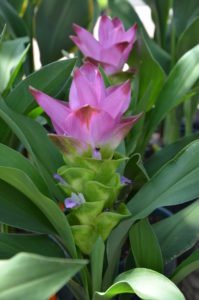 Hidden gingers (Curcuma) are in 2 separate groups. One is a sun lover (C. alismatifolia) flowers throughout the season growing 12-24” tall. The second one (C. ‘Scarlet Fever’) is a late spring bloomer with flowers appearing before the foliage, needs part shade,

grows 2-4’, and resembles a dwarf banana. Another early bloomer is the C. ‘Chocolate Zebra’ which takes ½ day sun and blooms throughout the summer. 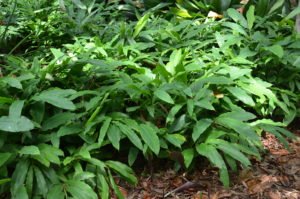 Another ginger many people have is Alpinia nutans (grows 12-30” to 6’ if not frozen) and has spicy scented foliage when crushed. This ginger rarely blooms because the flowers are produced on stalks the second spring and not have been damaged by frost. Get this beauty to bloom by planting it against the house underneath the eave of the roof and on a south or western exposure. I include this one because many people grow this ginger and don’t understand why it doesn’t bloom.

Plants make us happy and allow us to be creative and in the moment, so take time to visit a nursery, pick up some pretties and Enjoy!