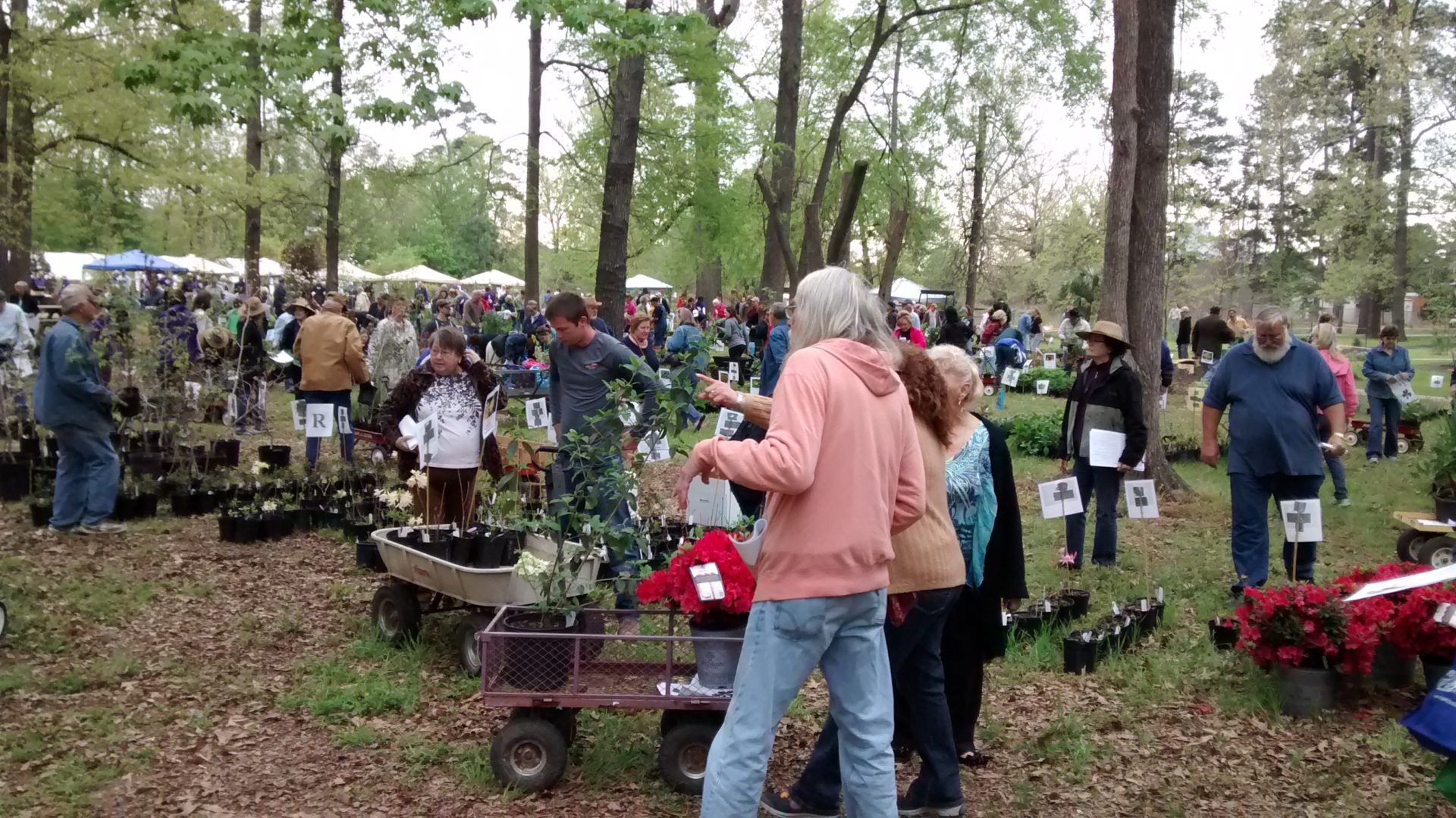 The month of April started out with our most successful SFA Gardens spring plant sale ever. If it weren’t for volunteers and student 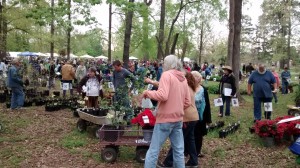 workers we’d never pull it off. It’s a major undertaking but provides our main source of income for garden upkeep and development. We only have two per year and have immediately begun propagating plants for our fall sale which will be Saturday, October 4 at the Pineywoods Native Plant Center in Nacogdoches.

The next bit of excitement came with a report out of Austin that mischievous Aggies had planted “maroon” bluebonnets on the UT campus there. Since I helped Dr. Jerry Parsons with this project we were inundated with requests for comments and interviews from the likes of Fox News, NPR, and the UT school paper. After seeing pictures of the blooming beds, it became very obvious to me that it wasn’t a prank at all, as the off colors in the beds weren’t even maroon. The colors that appeared were most likely from the seed 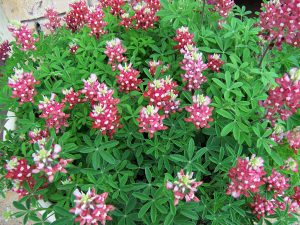 supplier who doesn’t pull out the scattered pinks and lavenders from his blue production field. A school group on campus later took credit for planting the extra bluebonnets that were appearing. I suspect however, given the idea, Alamo Fire bluebonnets will “mysteriously” appear in their beds next year.

Dr. Parsons happened to be visiting me in Nacogdoches when all of this occurred as he was our April SFA Gardens lecture series speaker. As always, he both entertained and enlightened a crowd of 100 on how to produce tomatoes and other vegetables in Texas. He also brought me some nice Tycoon and Valley Cat tomato transplants which are already setting fruit in my crown tire kitchen parterre out back. Dr. Parsons conducted tomato trials for the commercial growers and homeowners in the San Antonio area for over 30 years, so nobody in Texas knows more about how to produce high quality tomatoes than he does. Unfortunately we continued to have late 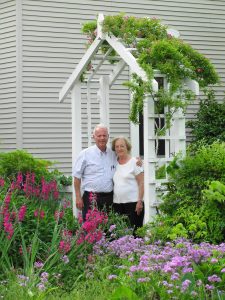 frosts well into April. At one point I even dug my recently planted beautiful tomato transplants from Jerry and placed them back into the greenhouse at school because it was so cold I didn’t trust covering them. After all, it’s a six hour drive from San Antonio and Dr. Parsons wasn’t going to bring me anymore of these highly productive varieties. While Jerry was here we visited George Millard in Nacogdoches who has the finest and largest crop of strawberries he’s ever produced. He sells from a produce stand on his property as well as the downtown Nacogdoches Farmers Market on Saturdays. 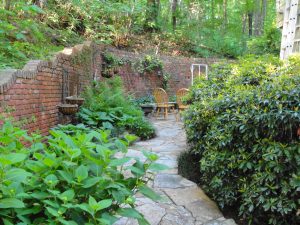 Next, April Jackson from Rutgers University visited for nearly a week. She is working on a project studying heat and drought tolerance in the sugar maples complex, so naturally she’s interested in our southern sugar maple, chalk maple, big tooth maple, and Mexican sugar maples. This was her second visit to Texas and she once again took numerous samples and data from my 10 acre stand of Acer barbatum behind my barn in Arcadia. Friend Peter Loos helped her with Acer leucoderme in southeast Texas and Dr. Dave Creech with Acer grandidentatum and Acer skutchii here at SFA Gardens.

The month ended with a long trip to Alabama and back. Dr. William C. Welch and I both gave several lectures (and led tours) at the Alabama state Master Gardener conference in Daphne. Needless to say, I attracted a natural disaster as it proceeded to rain more than 12 inches in 24 hours. Rain was actually coming in through the roof of the civic center while we were speaking and through the windows of the hotel where we stayed. I rode to Alabama with Dr. Welch and his wife Lucille and we spent the first night at their north Louisiana home. His garden there was showing out as always. On the way home we stopped at Petals from the Past nursery in 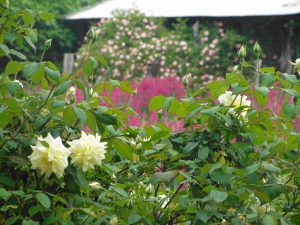 Jemison, Alabama where friends Jason and Shelley Powell have a beautiful nursery surrounded by spectacular fruit orchards. Naturally Dr. Welch loaded up with plants to take back home. Like myself, Jason majored in horticulture at Texas A&M as did his wife Shelley. His dad was a fruit specialist with Texas A&M and later Auburn University. Jason and I both worked for Dr. Welch when he was developing his fine garden at Cricket Court in Washington County.

We spent our final night in Alabama at the beautiful home of photographer Ralph Anderson. He has an equally beautiful woodland garden there that is professional quality itself. Ralph is helping Dr. Welch and me with photography for the rose rustling book we are working on.

Despite repeated late frosts and neglect from its owner, my little ferme ornée (as Thomas Jefferson would call it) in Arcadia was quite showy in April with its annual show of roses and Byzantine gladiolus. In addition to my tomatoes, I also got four rows of 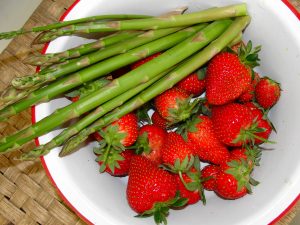 But without a doubt the month of April belonged to asparagus. I didn’t grow up eating asparagus but can’t seem to live without it now. I’m especially fond of asparagus sandwiches where I place steamed asparagus drizzled with olive oil and shaved parmesan cheese on top of home-made bread slathered with mayonnaise. YUM-MEE. I got my start of asparagus from the old Darnell home place were my parents built their house. It was growing in the middle of the pasture. Yes, it does take three years for asparagus to come into production but then you get to harvest it for possibly the rest of your life. I only harvest it up until May 1, then let the plants mature into big ferny mounds to store up energy for next year’s harvest. If I was smart, I’d plant enough for a spring and fall harvest. For fall asparagus you skip the spring harvest, cut it back during late summer, then harvest with the cooler temperatures and moisture of autumn. Unfortunately I don’t have enough for that.

Until next month, keep your tomatoes fed every two to three weeks. -Greg