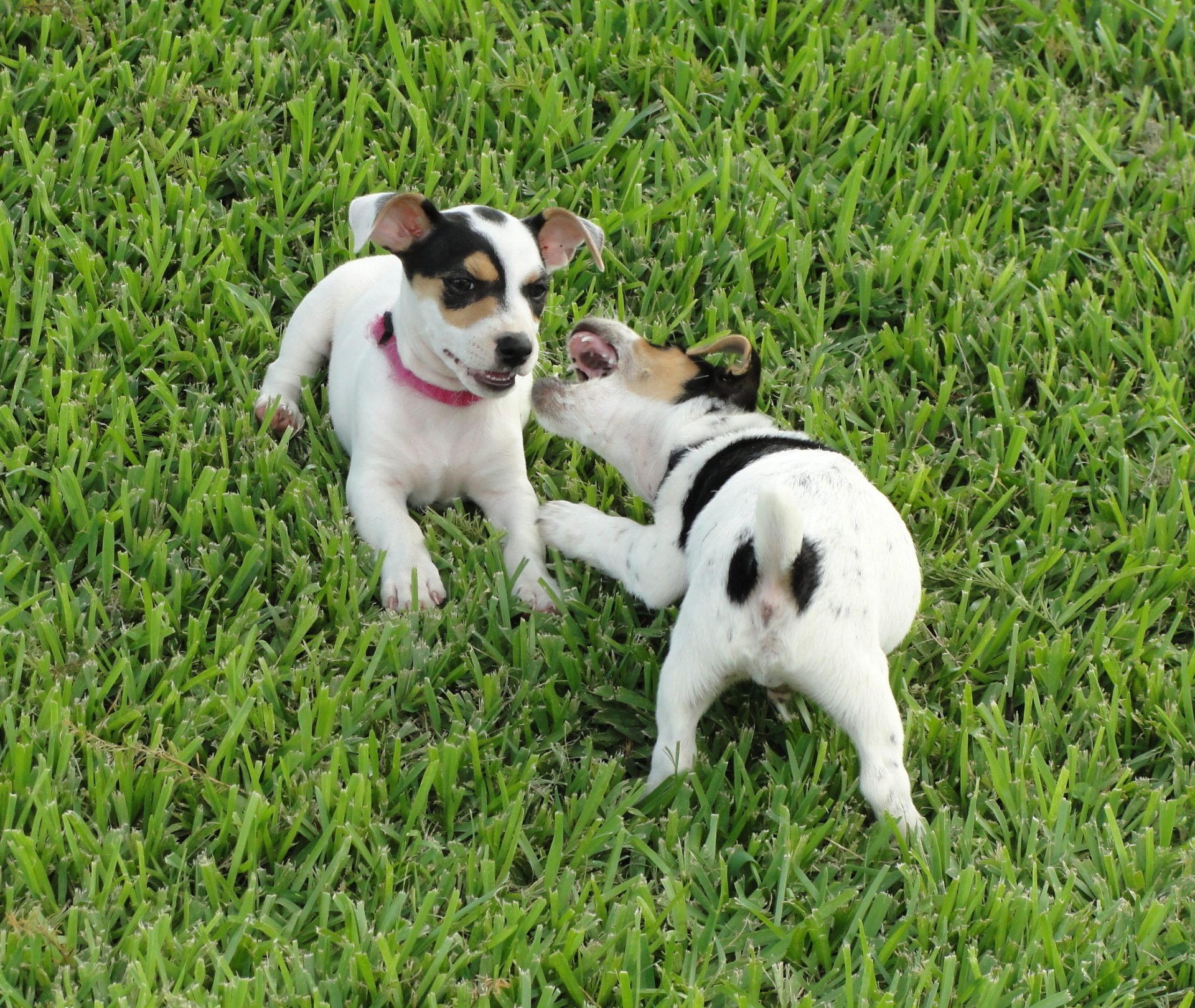 My month of July was dominated by two things: puppies and peas. The puppies are a pair, brother and sister. Their names are Acer and Ilex, Latin names for maples and hollies. They are Jack Russell terriers. I usually name dogs after flowers, but I figured flower names were too sweet for Jack Russells and decided to go with more rugged, native trees instead. Acer is the male and Ilex is the female. I probably won’t have to worry about other folks accidentally calling my dogs. Of course, I love Latin botanical names. John Meusebach, early German-Texan nurseryman 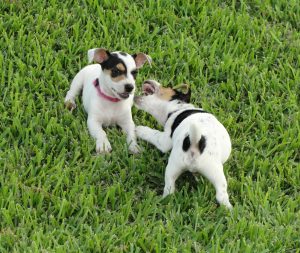 and founder of the city of Fredericksburg, used to recite Latin in his backyard stone Roman bath just to have some sense of culture in the rugged Texas wilderness. Latin is of course the language of science. Shelby County could use a dose of both culture and science.

Several folks have pointed out what a mistake I made in choosing Jack Russells. They are partially correct, but it was an intentional mistake. In case you are wondering, these aren’t our first Jack Russells. We’ve had seven in the past…Domino, Bandit, Cassie, Digger, Scout, Lindee, and Lily. Lindee was named after an antique rose from the Antique Rose Emporium. She was one of our best, though obsessive-compulsive about fetching tennis balls. She also liked to water the yard. All you had to do was turn on the hose and she would sprinkle everything in sight. She loved me and followed me like a shadow. Lily on the other hand was purely incorrigible. Her claim to fame was pretending to be rabid on cue and riding on the top of the cab of my truck (to the stares of passing traffic) down the highway. You had to go over 55 mph just to blow her back into the bed.

Jack Russells are high strung, independent, strong willed, over active, varmint dogs. The plan was to go back to snarling, trouble-making dogs to help me forget about my sweet Rosie. Of course they’ve made me wish I could trade them for Rosie already! They are nine weeks old and already more than a handful. They may look like sweet puppies when they are sleeping, but they aren’t! Whether I have them or my mom is babysitting them, we are both sporting bleeding arms at all times. All puppies have sharp teeth and claws but Jack Russells practice using them on live bait at an early age. Although far from convenient now, their mauling nature will come in handy around the farm when it comes to mice in the hen house and critters in the garden.

We normally have only female terriers because we like their disposition better. Of course Lily was an exception. She had issues. Unfortunately, it lokos like Ilex is going to have issues as well. It already appears that Acer will be functional and Ilex will be dysfunctional. All Jack Russells are very territorial and possessive, some more than others. Well, it seems that pretty Miss Ilex has claimed me. She did so on the way home when I picked her up, as she climbed to the top of my head for a better view. She still likes to climb up on my shoulder but doesn’t allow Acer to touch me. If he climbs aboard, she goes CRAZY and tries to kill him, literally. You haven’t been bitten until you’ve tried to handle a crazed, snapping, “wildcat” JRT. Apparently I’m going to need a muzzle and taser for this gal. 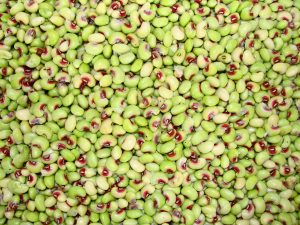 When I wasn’t herding wild puppies last month, I was picking or shelling peas. Of course, in the South, “peas” means Southern peas, field peas, or cowpeas, not cool season English peas. My Pappaw taught me how to grow peas and my family has always dined on them regularly. I like them all, but my family is partial to pink-eyed purple hull peas for every day consumption and cream peas for holidays and special events. There are at least a dozen commonly available pea selections and multiple dozens if you are willing to hunt on-line. Baker Creek Heirloom Seed in Missouri (rareseeds.com) once carried close to fifty kinds and still has the biggest selection I know of. Every so often, I grow the small seeded, bi-colored Ozark Razorback from them as well. I save my own seed for these and all the peas I grow for that matter. It’s so easy to leave them on the vine to dry, then pick, shell, and store, that there’s no reason everybody shouldn’t save their own pea seed. I also run them through a set of screens to properly size them according to variety. Peas come in standard varieties and “crowder” varieties. Crowder simply means a large pea, with blunt ends, that is easy to shell. Crowders can be assorted colors and flavors. I usually grow Zipper Cream, which is a crowder-type cream pea because it’s much easier to shell than Lady Finger and Cream #40. I myself actually like to shell peas and find it quite therapeutic. We always shell our own crowders but when I bring in more than a bushel of purple hulls, I haul out the automatic pea sheller. Since we were picking several bushels at a time, I used the pea sheller quite regularly last month. 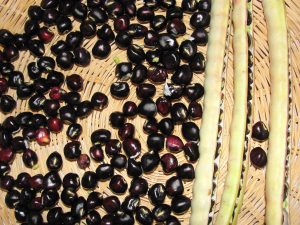 Although some folks turn their nose up at them, I generally also grow some Black Crowder peas as well. It was my Pappaw’s favorite pea and I still grow them from seed that he passed down through the family. The peas are a beautiful dark purple when they are fresh, dull black when they are dried, and gray-brown when cooked. My mom and I both like them so I planted us a row this year. All peas are good for you as they are high in fiber, protein, and other nutrients. They are essentially like eating meat and vegetables in the same food. And being from Africa, they are very heat tolerant, easy to grown, and need little fertilizer, as they produce their own nitrogen. It’s too late to plant them now (July is the cutoff month) but plan to grow some next year if you can. 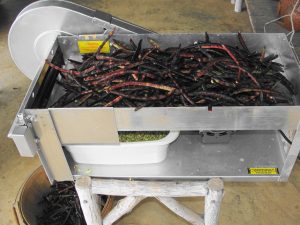 I had two visits from Arbor Gate staff last month. My friend and former Mercer Arboretum boss, Linda Gay, spoke at our SFA Gardens lecture series, while Beverly Welch and husband Max came to see me in Arcadia. I’m normally opposed to visitors but they were both pleasant exceptions. Until next month, stay cool, and start on your fall garden.