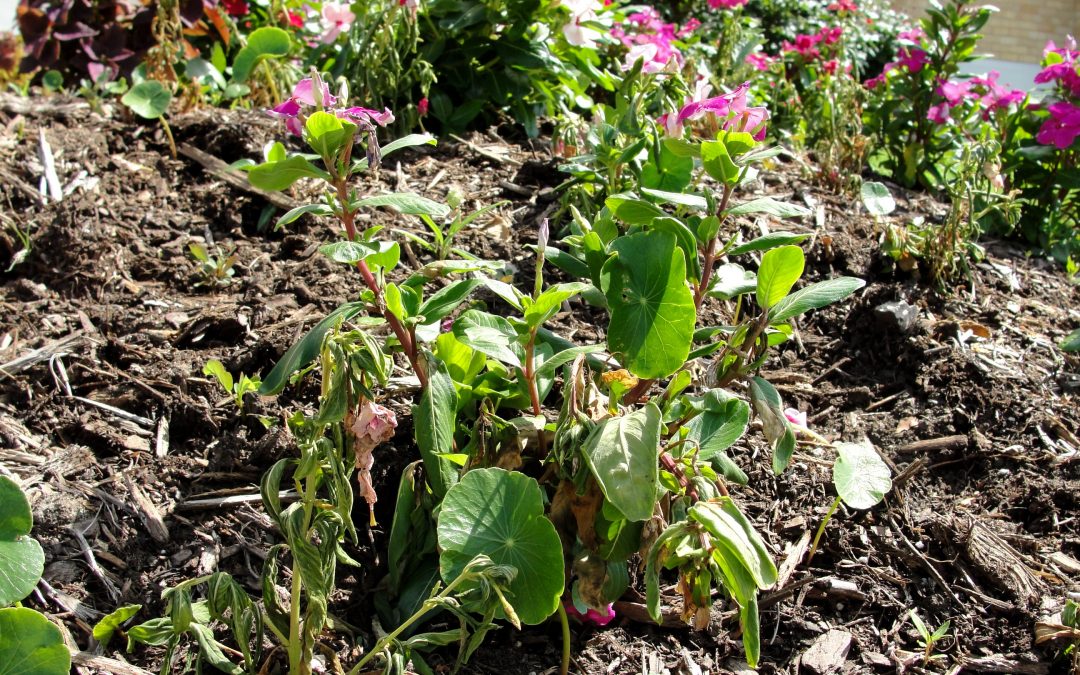 Periwinkle blight (aerial phytophthora) is caused by the fungus Phytophthora parasitica.  It’s the number one disease problem for annual vinca or periwinkle (Catharanthus roseus) and can persist in the soil for several years.  Sadly, it’s almost always caused by folks not understanding something known as the disease triangle which includes a host, a pathogen, and environmental conditions.

Under conditions of frequent overhead irrigation or rainfall, this disease spreads rapidly.  The fungus is often introduced into the landscape by infected plant material.  Aerial phytophthora can be a recurring problem for periwinkles once the disease organism has been established in residential or commercial plantings.

The initial symptoms of disease are the presence of water-soaked, gray-green, “greasy” areas on the shoots and leaves.  This symptom is quickly followed by a sudden wilting of shoots.  As the disease advances within the plant tissues, dark brown lesions develop on the stems.  These lesions result in the death of the stem or entire plants.  Under wet conditions, the microorganism can move from one plant to another merely by leaf-to-leaf contact.  When the foliage remains wet, the disease progresses very rapidly.  Plants may be killed within one to two weeks after symptoms appear.

There are some simple rules for growing periwinkles.  Ignore them at your own peril.

Successfully growing periwinkles is all about sanitation and minimizing water contact with the plants.  Keeping them hot, sunny, and on the dry side is the key to success.

Greg Grant is the Smith County horticulturist for the Texas A&M AgriLife Extension Service.  He is author of Texas Fruit and Vegetable Gardening, Heirloom Gardening in the South, and The Rose Rustlers.  You can read his “Greg’s Ramblings” blog at arborgate.com and his “In Greg’s Garden” in each issue of Texas Gardener magazine (texasgardener.com).  More science-based lawn and gardening information from the Texas A&M AgriLife Extension Service can be found at aggieturf.tamu.edu and aggie-horticulture.tamu.edu.