Onions in a Southern Garden 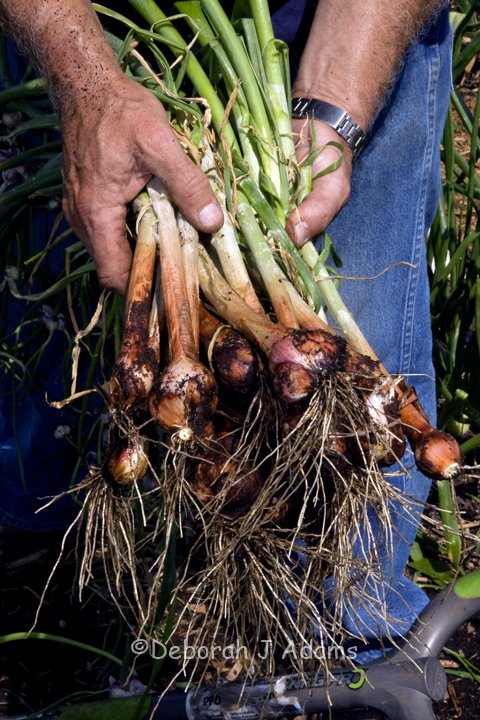 I just harvested a wheelbarrow load of shallots. At least they were sold to me as shallots several years ago at the Brenham, TX Farmer’s Market. They are actually top onions which produce small bulblets where the flowers are supposed to go. They also produce a large clump of shallot-like bulbs that are every bit as large as a store-bought shallots, eat like a shallot and grow really well in my South Central Texas garden. Placing this onion precisely in the onion family is difficult because the family is large and rather confusing. The Genus Allium includes more than 700 species some of which, like onions, chives, leeks, shallots and garlic, are edible. Others are grown for their ornamental value. Most of the edible onions belong to the species Allium cepa.

The Top Onion-sometimes referred to as the Egyptian Onion or Tree Onion belongs to a sub group Proliferum within Allium cepa. No flowers are produced on my “shallots” so I presume it belongs to this sub group. The so-called “True French shallots” also belong to A. cepa so the two may be kissing cousins. Almost all of the “true” shallots I’ve tried to grow did well during the cool winter season but seemed to rot before making bulbs in the spring. Apparently the French shallots require longer days to initiate a bulbing response than we get in our climate or by the time we hit the longer days of June it’s too hot and wet so they rot. I did grow some white ones from seed planted in the fall one year but they were a bit small. Decades ago the Horticulture Department at Louisiana State University released the LSU Multiplying Shallot—a white, rather pungent shallot that grows very well here, too, when planted in the fall from divisions and harvested in April/May.

The Top Onion/shallots in our garden are truly amazing. When the large bulbs that develop at the base are planted they tend to make larger clumps and shallots but the bulblets when given compost-enriched soil and plenty of water/fertilizer make nice size clumps too. We dig them in May before it gets too hot and lay them out on a shaded porch to dry before separating them and removing the dried stems (actually modified leaves). The bulblets could be eaten but it would be tedious to prepare them. The shallot-like bulbs that form at the base are every bit as large as “store bought” shallots and they keep all summer stored in shallow boxes in the garage. In September/October the ones that are left get planted along with the bulblets for next year’s crop. If we don’t get them planted they tend to sprout in storage.

Fall is the main planting time for the entire Onion Family. Chives, garlic, leeks, short-day bulbing onions, multiplying onions (scallions) are planted in the garden beginning in September and plantings can extend into November. Bulbing onions are best from seed in the fall (hence the 10/15 sweet onions) or transplants can be set out in early January. Really transplants of the other relatives like leeks can be planted into late winter if plants are available. Some gardeners like to set out short-day onion transplants in the fall but they may have a tendency to bolt to seed—especially if they are large plants (pencil size). Some members of the onion family will even grow through the summer. Chives and a cousin, Garlic chives, will last through the summer with plenty of moisture and the multiplying onions like Ishikura or Iwatasuki (Japanese Bunching onions) will keep you in green onions, too. Onion seed doesn’t keep very well so check your calendar to find fresh seed in August for fall planting. Most cash and carry nursery departments don’t stock up on fall seeds, but Arbor Gate does and we hope to have some of the shallots started in pots for the Fall Garden program with Tom LeRoy and yours truly.