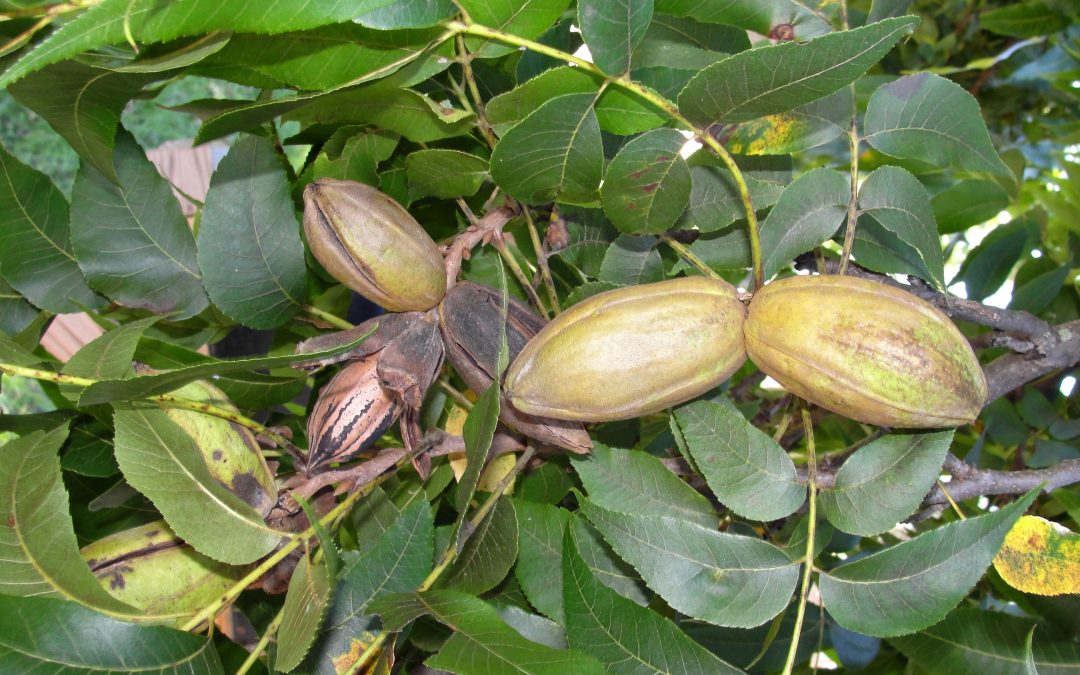 Everybody in Texas loves pecans. It’s a law, I think. After all, it is our state tree. Don’t ask me what nut gave it a botanical name honoring Illinois, because I don’t know. It should have been named for Texas, Louisiana, or Mississippi, where they are most common in the wild, and grow in profusion in deep soils along rivers. Texas generally leads the nation in native pecan production. And all good cooks and candy makers will tell you that the small oily native pecans taste the best.

Pecan trees are generally planted during the fall or winter. They are available as both bare-root and containerized plants. If you are planting bare-root pecans, it is absolutely a must that you plant them when they are dormant during the winter. Containerized plants can be planted year-round, as long as there is moisture, with fall being the best time, winter second, spring third, and summer the worst. Pecans should be spaced about 50 feet apart.

Pecans require cross-pollination with another cultivar or seedling to make nuts. Pecan cultivars are divided into two categories. Some make their male flowers (shed their pollen) first while the others make their female flowers (future pecans) first. Each type naturally pollinates the other. It’s critical that you plant at least one cultivar from each category or have existing native pecans nearby. Pecans are wind pollinated and can cross-pollinate up to ¼ of a mile away.

Pecan trees require at least eight hours of direct sun (preferably more) for maximum production. They will grow in most soils but produce best in those that are deep, fertile, and well-drained. They generally require irrigation during the summer to produce a crop of nuts.

Dig a hole twice as wide as the tree’s root ball and as deep as the roots or pot it was in. Water the root ball in the hole and then backfill with the native soil. Make sure not to plant the tree too deep or it will die. Create a circular berm around the tree that acts as a catch basin for water and water the tree once a week until it’s established. Keep a 4-inch deep and 4-foot-wide ring of mulch (compost, bark, pine straw, etc.) around the base of the tree until it exceeds 6 inches in diameter. This mulch will help conserve moisture and keep the soil cooler during the summer, warmer during the winter, and keep nearby weeds and grass from stunting the growth of the tree. Remember that tree roots and grass roots all grow in the same area of soil where oxygen is available. This ring of mulch will also keep lawnmowers and string trimmers from damaging the tender bark of the tree.

Pecans have a host of potential insect and disease problems, including aphids, phylloxera gall, pecan nut casebearer, scab, and fall webworms. Visit the Aggie Horticulture website under “fruit and nut resources” for prevention and control methods.

Pecans ripen in the fall and will fall to the ground when ripe. Allow them to dry for several more weeks in a well-ventilated area and then store them in the refrigerator or freezer.

Greg Grant is the Smith County horticulturist for the Texas A&M AgriLife Extension Service. He is the author of Texas Fruit and Vegetable Gardening, Heirloom Gardening in the South, and The Rose Rustlers. You can read his “Greg’s Ramblings” blog at arborgate.com, his “In Greg’s Garden” in each issue of Texas Gardener magazine (texasgardener.com) or follow him on Facebook at “Greg Grant Gardens.” More science-based lawn and gardening information from the Texas A&M AgriLife Extension Service can be found at aggieturf.tamu.edu and aggie-horticulture.tamu.edu.