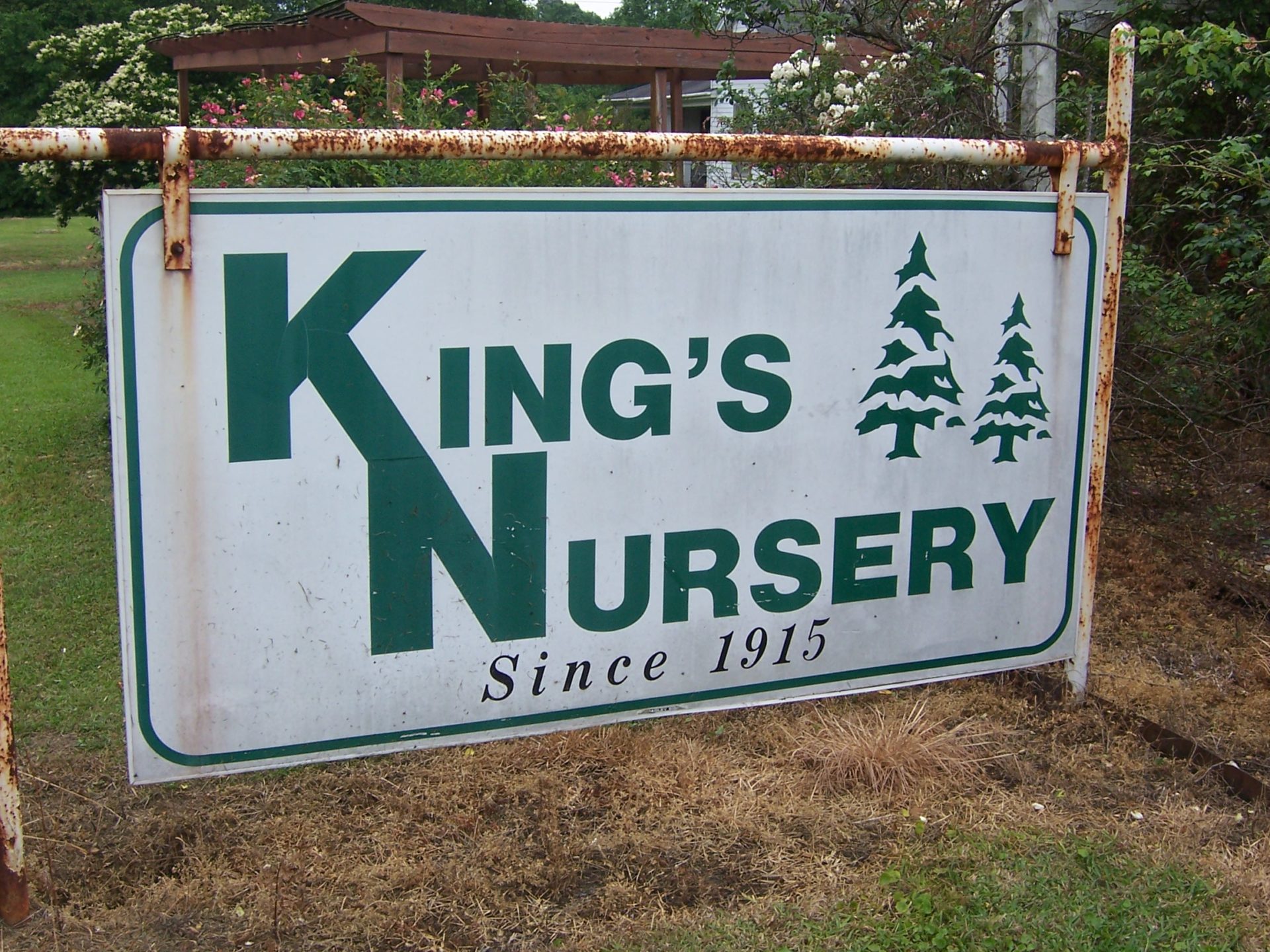 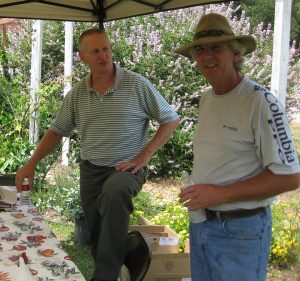 It was inevitable that I would meet Aubrey King.  After all, I loved music and I loved plants.  I don’t even remember the day that I met him.  It seems like I knew him forever and don’t even want to remember the day I didn’t.  We were bound by plants and humor.  Of course it’s only natural that a third generation nurseryman and a lifelong horticulturist would be friends.  We both loved to learn about gardening and we both loved to teach others about gardening.  Aubrey was a natural teacher because he was a natural talker.  We always joked that Aubrey slowed the customers down long enough for his wife Cheryl to have time to finish growing the plants!  I guess that made us bound by the gift of gab as well.  I never heard an Aubrey King lecture without jokes and humor.  I was born a clown and have always had to restrain myself, especially at home with more serious minded folks; but not around Aubrey.  Aubrey and I could fish a punch line out of a punch bowl.   Heck, we generally laughed ahead of time because we knew where each other’s jokes were heading.  We often joked that we shared the same brain, even going so far as using each other to finish Latin botanical names when the other paused. 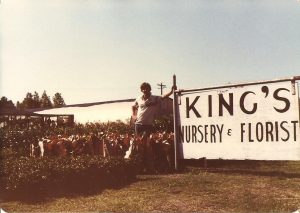 Aubrey King was beloved by legions of gardeners, as King’s Nursery grew plants that weren’t available any place else in the world.  As a matter of fact, King’s was frequently the first to produce many of my new plant introductions and creations.  When I recently asked for volunteers to help King’s during Aubrey’s illness, it was obvious how far reaching King’s influence was.  Volunteers from Nacogdoches, Lufkin, Longview, Tyler, Marshall, and Shreveport all responded with those from other cities making plans to.  Kings Nursery wasn’t just an East Texas institution but a Texas institution.  One day we had Master Gardener volunteers from three different counties at the nursery at the same time.  They were there because they loved King’s Nursery.  But even more importantly they were there because they loved Aubrey King.

Aubrey was special.  He wasn’t just my friend.  He was everybody’s friend.  He was not only beloved by legions of gardeners because of his unique plant selection, but because they knew that he would be perfectly honest with them when they asked him gardening questions.  They also knew that Cheryl and Mrs. Freeman were equally as nice and honest as well.  Aubrey’s intention was never to sell plants.  His intention was always to teach folks and make them happy.  Selling plants was secondary. 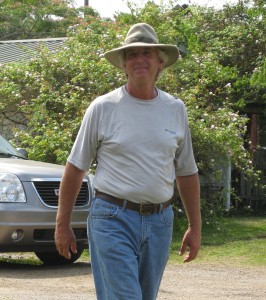 I should be a bit jealous.  Aubrey and I both taught lots of folks about gardening, laced with a heavy thread of humor.  We both had a long line of gardening fans and groupies.  But that was just half of Aubrey’s life.  Aubrey wasn’t just a gardening entertainer but a singing one as well.  He took that same humor and fine voice on the road to make the 50% of the public that doesn’t garden happy as well.  I guess I can thank my Shelby County grandparents for my getting to know Aubrey, since they were the ones to teach me to love gardening and gospel music.  Many a tired day I’d be driving home from out of state or out of town lectures to be greeted by Aubrey and the Calvary Boy’s Quartet on KDET (Center) or KGAS (Carthage) as I drove back to Arcadia.  There’s nothing more comforting than to hear your friend’s voice when you are tired and weary.

Whether teaching, joking, or singing, Aubrey’s voice was a soothing salve for many.  His friendly frolicking voice is just alive in my head as it was last year and the year before that.  Luckily he was one of those unique individuals that will live on forever in the gardens, radios, and hearts of thousands of fans and friends.  Good-bye Aubrey King.  My garden and heart will never be the same.  –Greg Grant

Below is an article I wrote about Aubrey King in 2006:

On the HE–WT line,
Old East Texas sure looks fine
Drop me off just anywhere (near)
Tenaha, Timpson, Bobo, and Blair.  –Tex Ritter 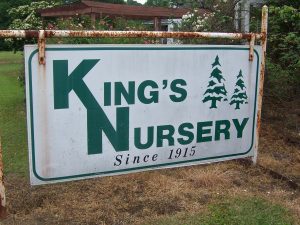 Unless you’re an old country music fan, I’ll bet most of you have never heard of “Tenaha, Timpson, Bobo, and Blair”.  What apparently originated as a military marching cadence, a “shooting call” during dice games, or an announcement on the train, eventually became the topic of a popular Tex Ritter song during the 50’s.  I’m not making this up!

These four little towns (actually Bobo and Blair are just “communities” now) are all located in Shelby County along US 59 (and the train track), between Nacogdoches and Carthage, Texas.  Shelby County is one of the original Texas counties formed by the Republic of Texas in 1836.  Though the population of this Deep East Texas County is small, its history looms large.  Many early settlers entered Texas through this area.  As a matter of fact, I’m a seventh generation native of Shelby County myself.  Talk about putting down roots!

There are a number of things to see and do if you happen to visit this neck of the Pineywoods.  There’s the beautiful “Irish Castle” courthouse built on the Center square in 1885.  And of course if you like to fish, there’s Toledo Bend lake bordering the Sabine National forest.  But if you’re a gardener, there’s only one place to go and that’s the timeless King’s Nursery in Tenaha, Texas. 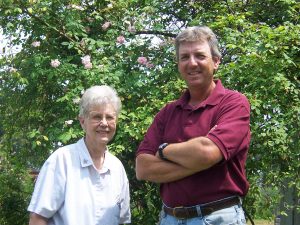 When you visit a “big box” chain store garden center, you’re lucky to find somebody that even gardens, much less has much experience in the nursery business.  In the case of King’s, they’ve been doing it for three generations now!  Owner, Aubrey King, took over the business from his dad in 1988, who took over from Aubrey’s grandfather in the 40’s.  What started out as a wholesale fruit tree nursery along the railroad tracks in 1915 now boasts everything from hardy annuals and perennials to uniquely adapted trees and shrubs.  Of course you can still get fruit trees and vegetable transplants as well.  Not just common varieties either.  Aubrey and his wonderful wife Cheryl grow most of the plants themselves working closely with the Stephen F. Austin Mast Arboretum, Texas A&M University, seed companies, local breeders, and other sources of new and innovative plant materials.  It’s not uncommon to visit King’s and end up with Texas Superstars, Texas natives, and Texas heirlooms all in the same load.

Since the Kings are good friends of mine and the closest nursery to me, I’ve always introduced most of my new plant developments there as well.   As a matter of fact, they are generally the first nursery in the United State to carry most of my new introductions.  Dr. Jerry Parsons and Dr. William C. Welch with Texas Cooperative Extension often share interesting plant material for King’s to propagate as well.  King’s Nursery is also usually one of the growers for Dr. Welch’s annual Oktober Gartenfest in Rountop each year.  His selection is legendary among East Texas gardeners.  He often supplies plants to a number of Master Gardener plant sales too.  People know if King’s grows or carries it, it’s the right stuff.  Lots of folks drive to little Tenaha from as far away as Shreveport, Longview, Tyler, Nacogdoches, and beyond to take advantage of their extremely friendly nature and reasonable prices, as well as their amazing selection of plants.  In addition, Aubrey’s mother, Margaret, runs a flower shop there, which the family started in 1921.  When wife Cheryl’s not planting seedlings or helping customers, she’s usually making corsages or funeral sprays.  She’s an amazing gal!  I usually tell people to look for Aubrey talking and Cheryl carrying bags of mulch to somebody’s car with a handful of carnations sticking out her back pocket.

Aubrey’s not just a good friend and good nurseryman, he’s also a good singer as well.  For practically his entire life, Aubrey has been a member of the successful and popular gospel quartet, The Calvary Boys.  When he’s not at the nursery figuring out how to grow the next popular plant, he’s usually on the road singing in churches and small town all over East Texas.  They’ve even sung at the Ryman Auditorium in Nashville!  Of course you can usually pick up one of their CD’s when you’re checking out. 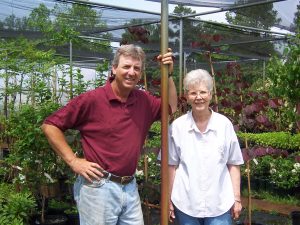 And as if three generations weren’t enough, the King’s are working on their fourth.  For you see, their oldest son, Andrew (currently on the road singing gospel with The Dixie Melody Boys from Kinston, North Carolina), is a graduate of the Stephen F. Austin horticulture program, while youngest son Aaron, is a turf major at Texas A&M.  We all hope they come home and follow in the family footsteps.  It’s happened before.  At King’s Nursery the apple generally doesn’t even fall off the tree!

And, finally, a poem for Aubrey:

The King is Gone

There once was a nurseryman named King,

Whose voice oh how it did ring.

He grew plants for a living,

Was caring and giving,

And traveled the country to sing.

Every person he met was a friend,

Help to all he would lend.

He left us too soon,

No longer to croon,

But will live in our hearts till the end.