More Than You Ever Wanted to Know About Jujubes 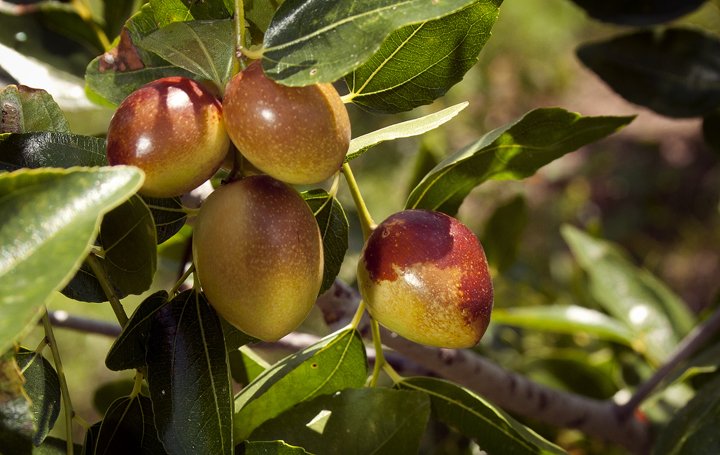 I’ve had a lot of nicknames over the years—Chicken Bill, Tomato Bill and of late, Jujube Bill. These nicknames usually come with some regrets. The chickens ate everything in the backyard and left a lot of you-know-what. I still love tomatoes but I tend to overplant leaving lots to share with friends and neighbors (no regrets really). The jujubes 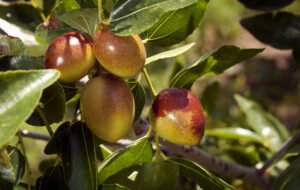 Including my time as an Extension Horticulturist in Harris County, I’ve been working with jujubes for forty plus years—not always with my current intensity. They started as a novelty championed by amateur fruit growers like Dr. Leon Atlas, George MacAfee and Sam Powers. It didn’t take me long to discover the California Rare Fruit Growers and their publication ‘ JUJUBE Primer and Source Book’ by Roger Meyer and Robert R. Chambers. Roger Meyer is gone now but his California nursery was my major source for close to twenty improved cultivars that were imported into this country beginning in the late nineteenth century, mostly from China with a few from Russia. The fruit is basically like a super crisp, sweet/tart apple with a hard “stone” seed covering in the middle. No doubt many other fine varieties exist there today; but, considering the current pandemic, the political climate between the USA and China doesn’t seem to offer much hope for any new varieties being imported in the near future. 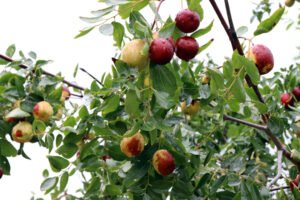 Now, before you move on to another blog, let me extol some of the virtues of what we have available and why they might deserve to be included in your home landscape or orchard. Jujube trees are tough, attractive and they produce more fruit than you can eat fresh and give to friends and neighbors. The last couple of years, due to my interest in growing some from seed we’ve been drying the fruit trimmings in the dehydrator and this is a delicious way to stretch these sweet/tart fruits loaded with fiber and vitamin C over a year (or longer) until the new crop comes in. Since jujubes are unfamiliar to many people in this country it’s worth sharing some tips on how to eat a fresh jujube. You won’t want to bite into the hard stone so start by rolling and chewing the crisp flesh off of the stone. The stone has sharp points on one or both ends so don’t swallow the seed (stone).

Most jujubes benefit from cross pollination. I’ve noticed that trees like Honey Jar and Sugarcane typically have some fruit that are noticeably larger and these large fruit have stones containing viable seed. The smaller ones have stones but no seed. Both sizes are equally tasty but I like the “big uns”. Jujubes produce flowers that may have female flowers receptive in the morning and pollen shed in the afternoon while other varieties are just the opposite- female flowers receptive in the afternoon and pollen shed in the morning. This type of pollination is typical of Nature’s clever system to ensure cross pollination. I wish the specifics of this tendency were better documented by variety. The only reference I’ve found regarding flowering types was from Florida that indicates most of the cultivars I prefer have AM receptive flowering. Thus varieties like So (aka Dragon’s Claw), Shui Men (Shumen), Chico (aka GI 7-62) and GI 1183 may benefit from pollen supplied from afternoon types such as Lang, Tsao, Li and GA 866. The Chinese may have more information regarding compatible varieties for successful cross pollination but I’ve yet to find any information in the literature. Next season I plan to see if I can categorize some of my favorite varieties as morning or afternoon receptive female flowers.

Jujube fruits are usually best when half brown/half green. They can be very good when brown but most varieties lose their crisp texture within a few days after turning brown.

Some of the varieties in my small orchard include:

Li 2—this selection is similar to the more readily available Li but Roger Meyer described it as larger and somewhat elongated. It is quite good fresh, dries well (as most jujubes do) and sets abundant crops without seed development, hence it apparently doesn’t benefit from cross pollination and a single tree should do quite well.

SO (aka Dragon’s Claw) has a beautiful shape with zig-zag branching and it is somewhat dwarf compared to the more upright growth of most jujubes. This tree would make a beautiful accent trained against a wall. The round fruit is also delicious. The spines are menacing and if grafted to wild rootstock the grower must be in constant control to prevent root sprouts from turning the tree into a tangle of impenetrable spines with tiny sour fruit from the escaped root sprouts.

Sugar Cane is one of the real treats in the jujube orchard. It has lots of spines but the fruit is worth the trouble. As previously mentioned, if you have several varieties you will likely notice that there are larger fruits and slightly smaller ones. The smaller ones don’t have viable seed whereas the slightly larger ones likely will. This tendency may not be noticeable if a suitable cross-pollination compatible variety is not available.

Honey Jar is one of the sweetest jujubes I’ve tried. It also has a nice tart quality that enhances the flavor. The fruits are a bit smaller than Sugar Cane but not by much and the ones that appear to have been pollinated are larger—both taste great. The tree seems to be a bit smaller than average in our orchard but it’s very productive. Most Jujubes can reach 30-40 ft. at maturity if not regularly pruned.

Ant Admire is another of the “best tasting varieties”. It isn’t named after some favorite relative (Aunt Admire). The name is a literal translation from the Chinese name. In other words “ants love this fruit”. Actually ants can be a pest on most jujubes but our production has been adequate enough thus far that we haven’t considered spraying for ants. This is a variety that really reaches for the sky so cut it back early and keep cutting it back each year after the harvest season.

Sihong has a cylindrical chunky fruit. It’s very productive and very tasty. It is also quite vigorous so prune yearly.

Shanxi Li is an even larger form of the also quite large Li (Li is one of the most available varieties from nurseries). Shanxi Li is harder to find but it is plum sized, crisp and very tasty. Li virtually never develops seed but I have harvested seed from Shanxi Li. Both seem to set abundant fruit without cross pollination so you could get by with one tree. These trees also tend to be smaller in overall size.

Sherwood is a seedling variety from Louisiana that was marketed by the late Sherwood Akin. Since the trees from Sherwood were dug as root sprouts from the mother tree, root sprouts from one of Sherwood’s nursery trees should be true to type. Most nursery trees today however are grafted to wild jujube root stock and these sprouts can be a pain that will only produce small sour fruit in a very thorny bush.

Jin has a large, elongated fruit with great taste and crispness but it has been a shy producer in my Texas orchard.

Chico (GI 7-62 from the former Chico Experiment Station in California) is a large crabapple shaped jujube that is wonderfully sweet with a tart kick. It can be extremely productive and it will remain crisp for a time after turning brown. Ants, leaf-footed bugs, grasshoppers, birds and other critters confirm this review and they may necessitate spraying one of these days.

Mu was one of the earliest improved varieties introduced into the United States and at one time was thought to be lost but Roger Meyer rediscovered it in a small botanical garden. It’s a late season, large fruited variety with okay flavor but its fame in our orchard is that it spawned my use of greenwood grafting. I was repairing an irrigation line and realized that I had cut down my Mu tree in the process. Initially I tossed it on the brush pile but after a few minutes decided to give it a last ditch effort and graft a piece of the Mu tree to a close by root sprout. The trees were in full leaf at the time so the only option was a greenwood graft. I cut a stick of new growth about eight inches long and ¼ inch in diameter. I then stripped off all of the leaves and wrapped the stick (now- scion- to- be) with Buddy tape (a parafilm material with UV resistance that makes it last longer). Buddy tape is stretched and wrapped over the entire scion—making sure to overlap each turn to prevent drying out. I used a whip and tongue graft to attach the scion to the rootstock adding more Buddy tape below the cuts and wrapped up to the base inch or so of the scion that was previously wrapped. Not expecting much success I forgot about it for a few weeks and finally, with some apprehension, I glanced over one day to see if it had sprouted. To my surprise new shoots were growing vigorously from the graft. I now use greenwood grafts all through the summer and into fall. In my experience jujube grafts take much better when the tree is actively growing. I still collect dormant scions in February but don’t graft jujubes until the rootstocks begin active growth. By comparison, bark grafts and whip and tongue grafts are usually done in the late dormant season (January/February) with pecans and fruit trees since these trees seem to benefit from callusing (healing) of the scion and rootstock prior to active growth.

Kitaiski 60 (Russian #2 in Roger Meyer’s nursery list) is an early, very sweet, teardrop-shaped fruit that is one of the first treats in the orchard beginning in July. I also have several other Russian varieties but I’m still considering their worth.

There are many other varieties out there. Some of the others in my orchard I’m still evaluating and shamefully some of the labels have faded or been overgrown. I doubt that the jujube will ever have the popularity of peaches or apples in this country but they do offer an alternative to growers in the semi-tropics where traditional fruits especially the mainstream varieties, are not well adapted. 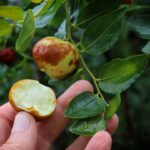 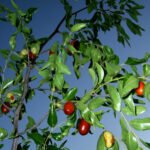 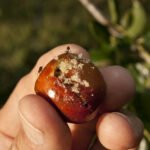 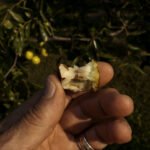 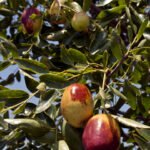 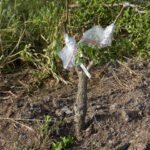 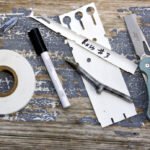 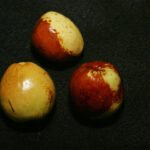 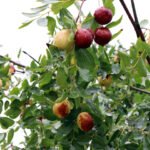 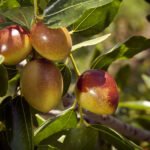 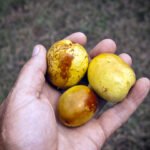 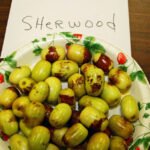 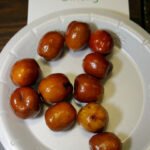 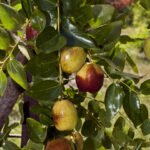 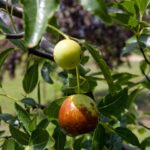 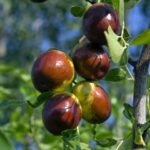 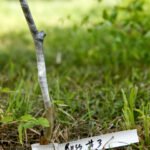