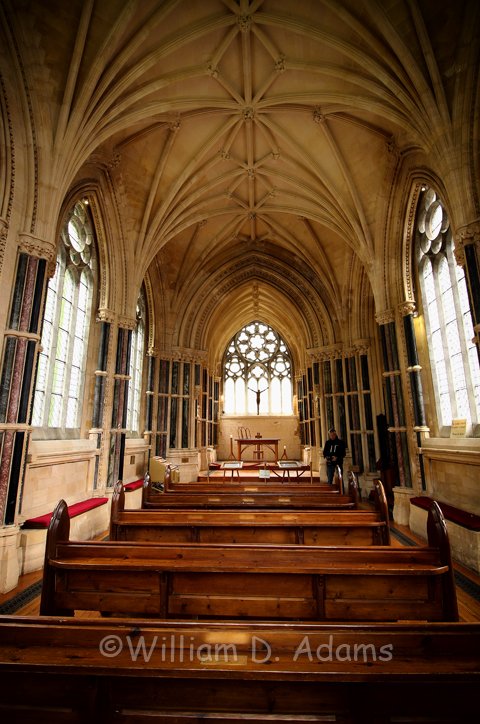 Thirty one years ago my wife and I signed up for a nine day, Fly and Drive vacation package labeled an “Irish Rambler”. With a determination to photograph Ireland for all to see (we were both shooting Stock Photography for agencies), we hit the ground running at Shannon Ireland, picked up our car, a map, a travel book and chits for B & B’s around the country. The days were exciting but similar—eat a full Irish Breakfast, hop in the car, photograph and drive until almost dark, find another B & B, sleep, etc. Driving on the wrong side of the road was a bit confusing but there wasn’t much traffic in September of ’85. We occasionally had to stop for cows and sheep plus we usually turned the windshield wipers on instead of the turn signals but by the time we brought the car back—driving into what should have been oncoming traffic seemed fairly normal. When our “rambling” finally came to an end we headed home on a charter DC-8 with cracked leather seats and a crew that looked fresh out of high school—direct to Houston—no problems.

Debbi signed us up for a new Irish vacation in 2016. This time we decided to let a coach driver deal with the wrong way traffic and settled back to enjoy two weeks’ worth of camaraderie with our 34 companions plus the driver and a travel guide. We mostly visited different sites this time. Some of the antiquities may not have had parking for coaches or may not have held as much interest—“ya seen one old dolmen ya seen um all attitude”, perhaps. There’s a lot to see in Ireland so it was never boring and the opportunities to hike were numerous though typically no more than a few hours in one spot. Places we had visited in ‘85 now included an entrance fee, visitor center, gift shops and a few hundred or a few thousand visitors (in the case of Blarney Castle and its famous stone). We kissed it during the previous trip so we spent time in the gardens that weren’t even developed on our first visit.

We started and finished our tour in Limerick. The first day we did a walking tour on our own, visiting ancient churches and castles—winding up in a popular pub for Guinness and Fish and Chips—our cure for jet lag.

The Cliffs of Moher was a site we visited earlier and the cliffs looked the same but there was only a trail up to the cliffs in ‘85. Now there’s extensive parking full of cars and buses and the usual tourist amenities. Apparently some groups don’t even see the cliffs because of the fog. Fortunately, the Visitor’s Center features lots of striking photography for visitors “in the mist”.

On our second day, we visited a farm where we were served fresh baked scones. We watched sheep shearing and herding demonstrations, then on to Galway for a brief lunch and shopping break. Galway was really crowded, so we did the unthinkable- we ate at McDonalds as an experiment where we had a really good spicy chicken sandwich (different menu from the U.S.). Our next stop was a demonstration at a Connemara marble shop—nice rocks! At virtually every destination there were beautiful plants including at least a million hanging baskets.

Day 3 started with Kylemore Abbey in the Connemara region. We had photographed the Abbey in ’85 but it was a girl’s school at the time and it was only open on special occasions. Now only a few Benedictine nuns still live there and the grounds including a spectacular Walled Garden have become a tourist attraction. The garden was formal but there were vegetable plots (including potato trials and flowers like Leopard’s Bane that would be difficult for us to grow in Texas). A portion of the Abbey is open and there is a beautiful church and memorial to visit as well. This is the region where THE QUIET MAN was filmed with John Wayne and Maureen O’Hara. We stopped in the afternoon at the village of Knock that attracts pilgrims from around the World to worship at the shrine depicting apparitions seen by the locals. Pope John Paul II held a Mass here that drew more than a million people to celebrate these visions confirmed by the Catholic Church.

Day 4 started with a behind the scenes tour of Belleek Pottery and into the gift shop (I didn’t hear a single complaint) and the next stop (drum roll) was the spectacular Giant’s Causeway. Northern Ireland was rather dangerous back in ’85 so this was a new stop for us and it is grander than words and pictures can portray it. Granted it was covered with tourists and a few were pounding coins into the rock crevices but there were opportunities to focus in on sections of the basalt columns that didn’t include hands, feet or Ipads. It was a fairly long walk down to the Causeway but there were shuttle buses and most people walked down and rode up. Virtually everyone noted that this was a highlight of the tour. Later we settled in for a two night stay in Belfast.

Day 5 began with a tour of Belfast—Queens University, the leaning Clock Tower and Parliament buildings. Next we visited the Titanic Exhibition, a truly fascinating story of the ship construction and the tragedy at sea. Our afternoon was spent at the Hillsborough Castle and gardens including afternoon tea in a State Room—just like the Royals!

Day 6 we left Belfast headed to Knowth and Bra na Boinne, a site featuring ancient grave mounds. At the mounds we wonder at the fascinating edge stone markings and take a dark walk into the Bronze Age interior. It wasn’t as claustrophobic as it sounds, but for forty or so, it was cozy. Then we were off to Dublin and a cabaret side trip for the evening.

Day 7 began with a Dublin city tour—Trinity College (later we queued up for the Book of Kells exhibit), Author’s Row and St Patrick’s Cathedral (Protestant). For lunch we were on our own (found a pub, a brew and a sandwich) strolled around the city for a while, bought a few gifts , checked out St Steven’s Park and then back on the bus. Later that afternoon we took a wonderful tour of the Guinness Brewery ending up in the Guinness Gravity Bar with a 360 degree view of the city, a cold brew and then Irish Stew served in a private dining room. The meal was preceded with a lesson on how to taste beer (Guinness, of course). Burp, back on the bus with our excellent and quite sober driver! By now you may think we were drinking our way across Ireland—well, we didn’t go there looking for shamrocks!

Day 8 began with a visit to Ballyknocken House, a family-run farm guesthouse, where we had a demonstration of scone preparation with Joe and Linda from our group pitching in to help. Irish butter and rhubarb/ginger jam plus coffee or tea got us off to good start (actually we had a full Irish breakfast every morning too) then it was on to Waterford via Kilkenny and a tour of the Waterford Crystal factory. We got to see the manufacturing step by step from the hot crystal to the finished product which was actually quite interesting.

Day 9 started with a clever and humorous local Waterford city guide then we loaded up for a trip to Blarney Castle. In ’85 I swear it seems like we just drove up to a parking lot, walked up some stairs and locked a lip on the Blarney Stone. In 2016 you couldn’t even see the castle from the parking lot and there was an admission fee (included in our tour). There was so much more to see though—beautiful gardens and additional antiquities that had been developed. The line for the kissing was too long for us but a few of our group made it. On to Cork and later that afternoon we visited Cobh and the Queenstown Story—last port of call for the Titanic. The exhibit also chronicled the Irish Potato Famine and the difficult, often fatal, ocean journey to the United States.

After a short bus ride on Day 10, we boarded a boat to Garinish Island in Bantry Bay with seals napping on the rocks along the way. Much of Ireland is subtropical and this garden island is a fine example of the exotic plants that flourish here. Camellias, azaleas, rhododendrons and New Zealand tree ferns are just some of the plants featured in these beautiful gardens. Annual flowers, dahlias and even a Houston area favorite—Crinum Lilies— provided seasonal color. Wide awake and gripping our armrests tightly we next proceeded around the Ring of Kerry. Narrow roads, tight turns and a steep drop-off were features of this scenic tour. Tunnels blasted through hard rock were exciting too. I was thankful we had a seasoned driver at the wheel and fortunately all the buses seem to go in one direction. We stopped for a deep breath and to photograph the Lakes of Killarney, then it was on to the beautiful town of Killarney for the night.

Day 11 took us back to what should have been a familiar excursion—the Dingle Peninsula. The difference was that this region was rather deserted and undeveloped in ’85. The roads were narrow and the curves tight but we navigated our little car on this earlier trip without incident. Fortunately our coach driver was even more skilled with bikers and more vehicles to contend with. Looking out the window at the livestock in steep pastures that led down to the water made everyone a bit nervous. We remembered reaching the tip of the peninsula late in the evening back in ’85 and we pulled off the road, photographing the Blasket Islands in the fading light. These days there is an extensive museum in the way. It was very nice and informative but it took me a while to figure out how to get outside where we could get an unobstructed view of the landscape. We stopped for lunch in the town of Dingle and I ate my first mussels. They were great and so was the Guinness.

Day 12 was our last day of the tour and we signed up for the optional Jaunting car excursion in Killarney National Park. Later it was on to Limerick with a stop in the town of Adare with its thatched cottages. In ’85 they appeared to be homes, now the ones we had photographed were shops and two had burned out and hadn’t been repaired. It was still a beautiful and very popular little town. Our last night in Limerick included a banquet at Bunratty Castle. On the earlier trip we didn’t attend the banquet but we have night photos of the castle. I seem to remember parking in a lot close to the castle and getting out the tripod. Now it’s more developed and there’s a virtual park with thatched houses, a gift shop, etc. The banquet was fun, the entertainment merry, the mead (honey wine) and the food tasty—in short a good send off for a wonderful journey. Ireland certainly has been discovered but it isn’t quite at the grid lock stage. If I were planning another trip I would shoot for a September vacation after elementary and grade schools have started so the crowds might be a bit smaller and September weather can be quite nice. Actually August was fine weatherwise—temps in the high 60’s, cool nights.

Ireland was still every bit as breathtaking as it was on our first visit and because of the increase in tourism, gardens have flourished along with the attractions. Coming home we were surprised to find it had rained a lot while we were gone and our grass reminded us of Ireland!