Helping Citrus Recover from the Freeze

The recent freeze hit a lot of citrus in our area pretty hard. The freeze was deeper and had a longer duration than was predicted. It also came on the heels of a very mild period, which prevented the trees from hardening off. The trees never had a chance to acclimate to the coming cold. In fact many of them had active new growth when the freeze hit. We sort of got “caught with our plants down”! So, what do we do now?

First of all, take a deep breath. I know they look bad, but there are things to consider before we rush out with the pruners, loppers, saws and wheelbarrows. We want to give our trees their best chance to recover. If you rush to prune, you run the risk of cutting away parts of your tree that may recover on their own. In addition, how the tree behaves in the weeks following a freeze can help you read the extent of the damage. If you are too quick to remove the damage, you will lose those clues.

How freeze damage occurs
Freeze damage occurs when ice crystals form in the tissues, expanding and rupturing cell membranes. Not all citrus varieties experience damage at the same temperature; some are hardier than others. And not all parts of the tree are affected equally.

Leaf damage will be apparent a few days after the freeze, but twig and branch death from a severe freeze can continue to appear for weeks after a severe freeze. In some cases, the extent of the damage may not appear until the following growing season.

Fruit
How readily the fruit is damaged will vary by the thickness of the rind. Citrus with thicker rinds takes much longer to freeze than those with thin rinds. Our grapefruits have gone through several severe freezes over the years, and we have never had the fruits actually freeze.

The cell walls of this freeze damaged orange have begun to break down and collapse. This will result in the juices leaking out and the flesh drying out inside the rind.

The interior of the fruit may suffer damage even though the peel appears normal. Pull a few fruits, cut them open and see if freeze damage is apparent. If it appears that the fruit has frozen, remove it all from the tree. If you do this immediately after a freeze, the fruit can often be juiced and the juice can be frozen for later use.

If the exterior of the fruit has soft or mushy spots it is likely too far gone to save. This will often be noticeable at the stem end first. If it just has brown pitted spots on the skin, check the inside. The damage may be only cosmetic, and the majority of the fruits will be edible, even if they aren’t pretty. If the fruit has any objectionable odor, toss it.

Badly damaged fruit may fall from the tree, but sometimes it will hang on until the frozen flesh dries out inside and the fruit becomes hollow. It is better to remove it by hand than to let it degrade on the tree.

If the fruit does not appear to be damaged, there is no reason to harvest it all at once. You can allow it to continue to ripen naturally. Just keep in mind that a full load of fruit reduces overall tree hardiness a bit.

Leaves and Twigs
Right after a freeze, citrus leaves can appear to be undamaged. If it is a mild freeze, the leaves may just curl up, or “cup”, and feel a bit stiff. They will usually stay that way awhile, and then grow out of it as the weather warms up. But in the case of a deep, hard freeze, the leaves will begin to curl and droop as they thaw out. The newly thawing leaf may look like it has dark “water spots” near the midrib or veins. Tender new leaves will likely turn black, while the older, mature leaves will fade to a soft brown or café au lait color. 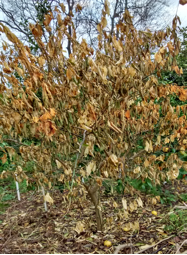 This Persian Lime has likely suffered major twig damage as indicated by the dead leaves remaining on the tree long after the freeze. A scratch test has indicated there is live wood farther down the branches. There is no visible bark damage. It is expected that this tree will recover, but will miss a year of fruiting. Pruning will be postponed until March, when most of the twigs will be removed and branch tips will be headed back to live (green) wood.

Leaf drop after the freeze is one way to judge how much twig damage has occurred. If a majority of the dead leaves fall soon after the freeze, the tree is likely to recover. Live wood will shed its damaged leaves through abscission. If the dead leaves cling to the tree for several weeks or more, it is an indication that there is twig death. If the leaves seem to cling for a long time, use the “scratch test” to determine if there is live, green wood; working your way down the branches to see where it begins.

Branches and Trunks
When ice crystals expand in the larger branches and the trunk, it causes fractures and splits. The visible signs include splitting bark, loose spots on the bark, and oozing areas that are known as “cold cankers”. Bark splits can be pretty dramatic in older trees, and bark splits in young trees can leave a scar that will last for years. But even this extent of damage does not mean sure death. I have seen citrus cut back to just a short trunk with a few stubs of branches that grew out to be full and beautiful two years later.

Pruning freeze damaged citrus
Once you have assessed your trees, it’s time to make a recovery plan. Don’t rush this! There is no advantage to pruning the damage out right now. It is more a cosmetic preference than what is right for the tree. We are likely to have another freeze event, and Houston is known for warm periods between freezes. We do not want to stimulate new bud growth too early, because those new buds will almost surely be killed in the next freeze.

Wait until mid to late spring before doing any major corrective pruning. Give the trees a light haircut in early March, tipping back until you can see the green cambium at the tips of the cuts. Then wait a few weeks. See what leafs out before you make any major cuts. They can surprise you.

In the most severe cases, you may find that your citrus has been killed all the way to the main trunk. You will need to determine if the grafted variety is still alive. Locate the graft union and scrape the bark of the trunk above it. If it is still green under the bark, the tree is capable of re-sprouting after you cut back all the dead wood. If the variety has been killed, the root stock may still sprout new growth. If it does, you must decide whether to re-graft it in place, or dig it out and start over. This opportunity is the reason we advise banking the graft before a hard freeze. You can lose the whole top of the tree, but if the graft is protected, a new tree will sprout and grow quickly.

Care of damaged citrus
Citrus that has been injured will need adequate nutrition and water to support new growth. Slow release organic fertilizers like Arbor Gate Organic Blend are the best option. This balanced fertilizer contains both the major and the minor nutrients required for healthy new growth. We want to see growth that is steady, but not overly vigorous, as this can lead to more serious infestations of Leaf Miners and Citrus Psyllids, setting back their recovery. Wait to fertilize until late February.

When the new growth begins, start regular applications of a sea-based foliar feed. Foliar feeds have several beneficial effects, including quick mineral absorption and a thickening of the protective surface of the leaf.