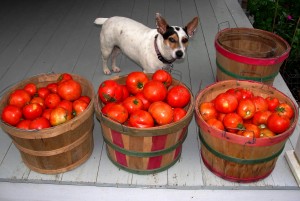 I took the week before July 4th off for vacation. Thanks to a full time job in another town and all the rain this year, my farm and garden had officially reached the embarrassing status. Just in case you think we professional horticulturists always have perfect, picturesque landscapes, think again. At least those doing all the work themselves don’t! Naturally we only show pictures we took the one day of the year it looked good.

All this “we” talk reminds me that I was busted again for using the “royal we” to refer to myself the other day. This practice is only supposed to be used by royalty and popes, but it was commonly used by my fellow hillbillies and relatives in the Pineywoods where I was raised. Best I can tell it drifted here from northern England through my Scottish ancestors. I was told at an early age that when folks in the South say “we” they mean me and my worms. 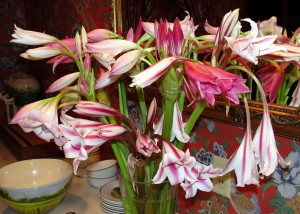 Speaking of worms, the morning I wrote this blog found me hoeing weeds lurking amongst my crown tire kitchen parterre out back. It only took a few seconds for the smell of the soil to filter into my nostrils and bring on a wave of memories of “playing in the dirt.” I try to make myself say soil instead of dirt since one of my college professors told us that soil was what you gardened in and dirt was what you got under your fingernails. Heck, as a self proclaimed “Pig Pen” I can always claim both! Although many think of getting down and dirty as lowly and shameful, I’ve always worn it as a badge of honor. To quote Thomas Jefferson: “…cultivators of the earth are the most valuable citizens. They are the most vigorous, the most independent, the most virtuous…”

Not a day goes by that I don’t smell something in the garden that brings back fond memories of a lifetime rooted in nature. The distinct smell of tomato foliage always does it, especially when I’m tying them up. This year I grew a sample of Dr. Jerry Parsons’ annual spring tomato trial which included Bobcat, Tycoon, BHN 444, Celebrity, Solar Fire, Phoenix, and Valley Cat. Despite all the rain bringing on leaf blight that got out of control, I still managed to pick around 20 fruits per plant every few days in June or around a bushel and a half each picking from just nine plants. Dr. Parsons has been trialing tomatoes in Texas for over 30 years so the worst things in his trials are often better than the best most gardeners are growing. It also helps that I plant them early with a pre-plant application of lawn fertilizer plus slow release fertilizer. I also water them in with a water-soluble fertilizer (Peter’s 20-20-20) and irrigate them using drip irrigation. Tycoon was the earliest to produce while Bobcat and Valley Cat held on the longest. Last year Tycoon was the champ, but this year I’d give that title to Valley Cat. July is the month to plant tomatoes for the fall so these guys along with their leaf blight and leaf footed bugs will get tossed shortly. 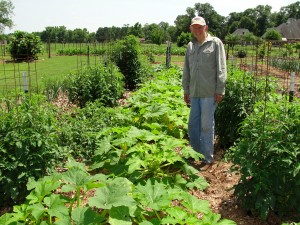 While all the rain brought assorted problems, it did stimulate crinums and rain lilies to bloom in profusion. Anytime I smell a milk and wine lily it reminds me of sitting on my grandparents’ front porch where swings, rockers, cokes in small bottles, pea shelling, and lightning bugs all hung out with me. My granny would give me a big glass jar that orange juice came in to catch as many lightning bugs as I could. My goal was to harvest enough to make my own lantern!

Thanks to all the mud this year, I never tilled my larger garden plot. It’s rare that I don’t produce a bumper crop of Sweet G-90 corn each spring. I usually follow the sweet corn with peas and okra, but I’m not sure I’ll get either planted as I plan on having a new garden fence installed and the fence man all but promised to destroy every plant in sight while using a tractor to build it. I tucked some Burgundy okra into a number of tire planters in the backyard, however, and planted one row of an experimental southern pea I’m developing over in my bulb patch. After all, what would a Southern summer be without peas and okra? Thankfully my friend Bill Jobe has the prettiest garden in East Texas and always shares with me. 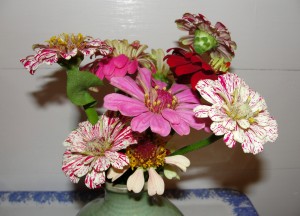 On the subject of peas and harmony, one of the occasional readers of this blog asked if I was being less than honest about finding true bliss and comfort in birds, broccoli, and butterflies. She all but said I was full of it. Just for the record, she was correct on only half. Yes, I am full of it, but YES I truly find mind numbing comfort in my outdoor pursuits. My heart glows and my blood pressure slows when I’m around nature. I don’t suppose this works for everyone, but it certainly works for me and I will cling to it as long as I live. Everybody has to have some way of coping with the pressures of life. I just happen to use the healing solitude of plants and animals to deal with mine. It’s cheaper than therapy and drugs!

One of my big joys this summer will be harvesting zinnias from my little trial in the backyard. I planted large flowered types that fell into my favorite color range. They include Benary’s Giant Wine, Berry Basket, Cool Crayon Colors, Moulin Rouge, Pop Art Red and White, Queen Red Lime, Raspberry Sorbet, Super Yoga Rose, and Zinderella Peach. They’ve just started to bloom. I’ll keep you posted on their progress. I’ve already removed Zinderella Peach since I prefer the gaudy dahlia flowered types and gaudy she ain’t. Bill’s wife Mary Louise grows beautiful zinnias each summer and I got tired of being jealous. They truly are the best cut flowers ever invented in my opinion.

Zinnias won’t be the only new addition to my back garden. My friend Missy has encouraged me to replace my crown tire parterre with an antique rose garden. Since my chicken-yard rose garden stays neglected and Dr. Welch and I are finishing up a book on rose rustling, it does make good scents. When she’s not looking though I’ll sneak in a few veggies! Smell you later, -Greg 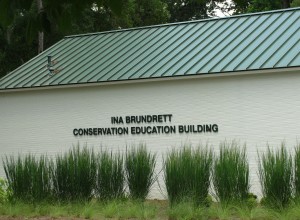 P.S. On a sad note, I’m sorry to say Tyler gardener, teacher, and philanthropist Ina Pearl Riggs Brundrett passed away in June. She was in the first Smith County Master Gardener class, a legend in the garden club world, and the lead donor for our Ina Brundrett Conservation Education Building at the SFA Pineywoods Native Plant Center in Nacogdoches. She truly made a difference with her life.