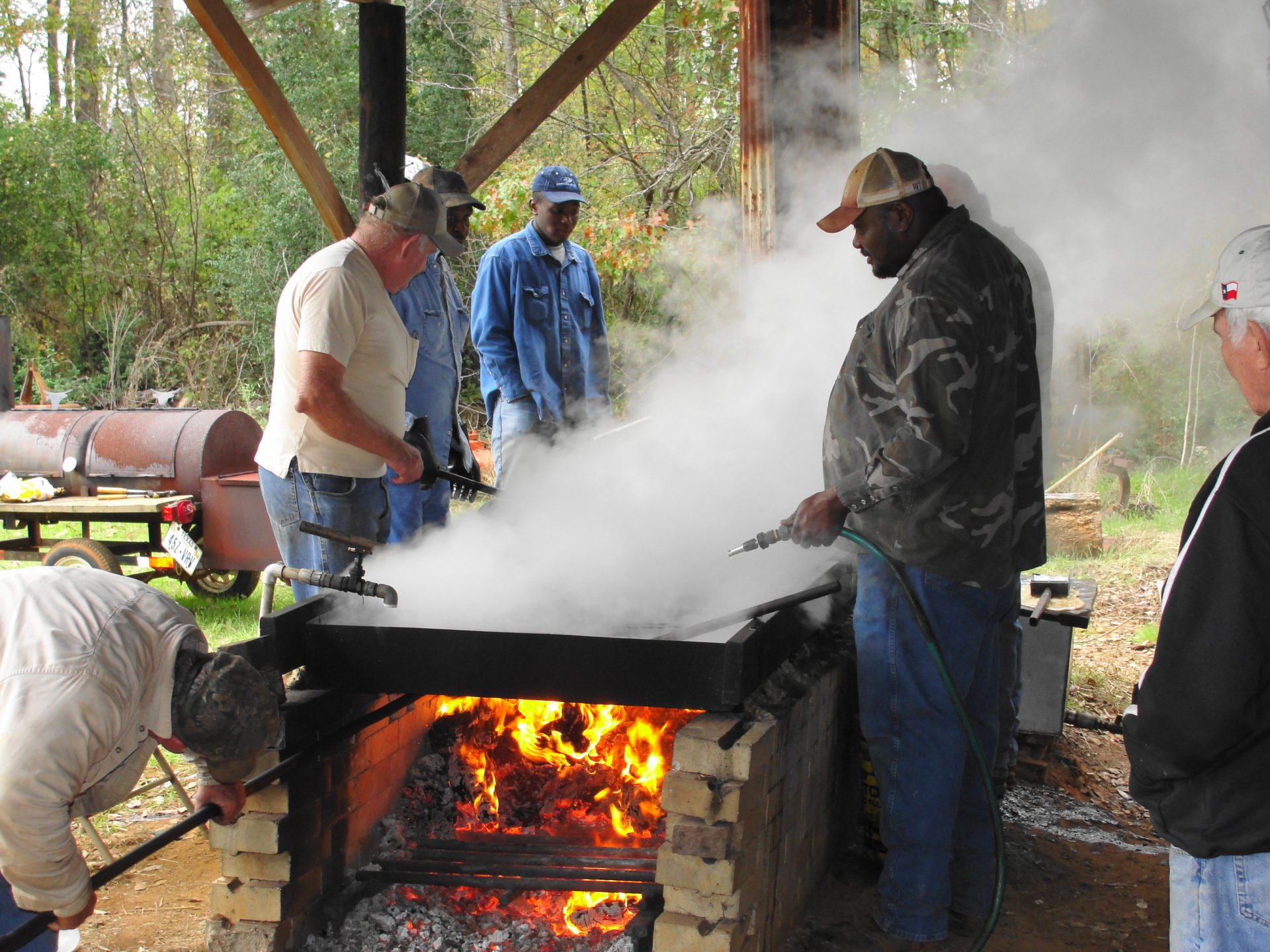 The first part of December I paid a visit to Jay Smith’s in Chireno to make ribbon cane syrup. This event traditionally takes place during the first cool spell after Thanksgiving when the cane has 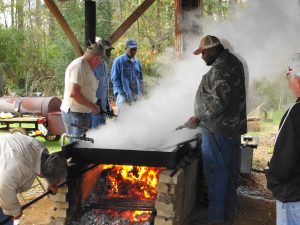 sweetened. This year the cane should have been harvested before the November hard freezes damaged it, as frozen sugar cane regrettably ferments. As a matter of fact that’s what rum is made out of. I only contributed a very small portion of cane this year as I plowed most of my crop under anticipating hip replacement during the summer. I did share seed cane with Cousin Pam’s husband in Arcadia where he grew a very fine crop. I’ll plow my last few rows under in the spring and turn my patch into a crop of lent lilies which are much less intensive. In my “old age” I’m slowly learning which projects are worth the pain and effort and which ones aren’t. Continuing my ongoing theme of falling to pieces (literally), I also cut my knee with the chain saw (second time in my life on the same knee!) in December and had to be stitched up by my family doctor. Doctors aren’t happy with those kinds of chores on Sunday morning by the way.

Next I erected my stylized bluebonnet bottle trees in the front yard and fetched my concrete chickens from Big Momma’s dogtrot up the road to be near my laying hens at my house. I figured they both could use some company for the holidays. Unfortunately the live hens aren’t laying much more than the concrete gals this time of year. 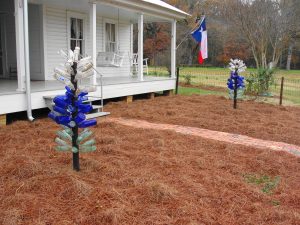 As always, I contributed the Christmas tree to the Grant house. For half of my life we harvested one from the wild but after listening to the annual grumbling about the tree quality, I started growing my own decades ago using assorted ornamental conifers. Over the years we’ve had everything from variegated trees to contorted ones. This year it was a seedling Arizona cypress that I kept sheared as usual. My elfin Momma announced it would be the last year for a standard sized tree as she wasn’t comfortable standing on a chair decorating them anymore. She will however continue her tradition of decorating a small native red cedar in a watering can using cherished homemade decorations (including my paper snowflakes I cut out one year). I’ll use my little Christmas tree spot behind the Arcadia 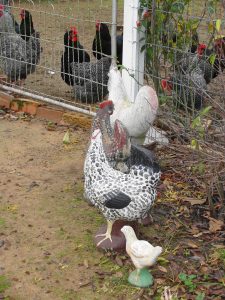 Masonic Lodge to grow the late Ying Doon Moy’s Orange Frost and Arctic Frost satsuma hybrids that Greenleaf Nursery is introducing. Dr. Moy crossed a Satsuma with a Changsha tangerine to produce these two hybrids with more cold hardiness than a Satsuma and fewer seeds than a Changsha. Hopefully the microclimate produced by the west facing brick wall of the little Masonic Lodge will allow me to grow citrus here in Deep East Texas where traditionally it’s been impossible. I sure miss my five Satsuma trees around my former little rent house in San Antonio! Thanks to Dr. Jerry Parsons I was however gifted with a big box full of Orange Frosts citrus from San Antonio that we have thoroughly enjoyed. 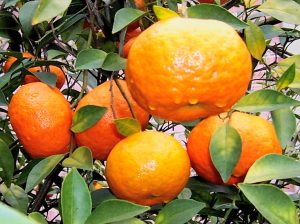 I was off from work for almost two weeks for the holidays and took advantage of the time to bird watch between my usual farm and garden chores. I even took the time to enter my bird counts on E-bird which will save and even organize my counts for me. Unlike most birders I’m not solely interested in how many different birds I can see in a lifetime. I just want to know which ones come to Arcadia and more specifically my little Rebel Eloy Emanis Pine Savanna and Bird Sanctuary out back. My favorite sighting in December was the hooded mergansers on the pond across from my parent’s house. Naturally I cringed when I saw my brother and nephew over there duck hunting one day. Luckily the mergansers are expert divers and managed to elude them. If the ducks are smart they’ll come to my place where I don’t allow hunting. My few little shallow ponds, swamps, and creek are mostly home to roosting wood ducks at night.

Last year I passed out cane begonias from Bayou Bend to my friends and relatives in order to test their horticultural abilities. I’m not exactly surrounded by English gardeners here so was pleasantly surprised by the results. I promised that I’d recognize the winner on my blog. It was a very close contest between my sister-in-law Ann, my cousin Pam, and neighbor Lesleigh Fitzgerald, but in the end Lesleigh’s had a bit more size and structure to it so she’s declared the official winner. Congratulations Lesleigh!!! It doesn’t come with a cash prize but it will earn her another project next year. She’s a dog lover like me by the way.

My family didn’t arrive for Christmas until the weekend after which gave my mom a little extra time to cook. It takes mass quantities to feed the herd for four days, especially the seven teenage boys. I did my best to help by smoking two pork shoulders for pulled pork, a pork loin, and two slabs of baby back ribs. I used Arcadia oak and hickory plus homemade BBQ sauce made with my ribbon cane syrup. I actually make two kinds of BBQ sauce, a sweet “Texas Style” that most of them like best and a tart “Carolina Style” that my sister and her husband (along with me) like best. I also contributed daily portions of my homemade rustic Italian bread and kettle corn. My mom made her usual tasty gumbo for the “Christmas” meal which included shrimp, sausage, and one of my roosters. My oldest nephew Reed was unable to be with us as he had to march with the Aggie Band in their Atlanta, Georgia bowl game, so Momma made him duck gumbo before he left using ducks he and his brother Seth supplied. 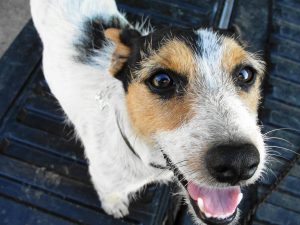 Just before we ate our “Christmas” gumbo my Jack Russell terrier Acer gave us all a big scare. He didn’t go with me when I left on the tractor earlier that afternoon so I assumed he went walking with the sisters-in-law or into the woods where the nephews and niece were playing. When I got to my parents that evening nobody had seen him. We looked all over Arcadia including the roadsides, culverts, barns, woods, pastures, etc. This is standard routine with JRT’s. Just as it was getting dark my mom heard some whimpering towards their barn and Uncle Noel’s house. Acer’s not known for being very vocal which made finding him even harder. It turns out he got hung under an old finishing mower along the fence row and was stuck there for four hours! I had checked all the new implements in the barn where he likes to hunt but forgot to check the old ones in the pasture. Thankfully my brother-in-law and nephew Trace helped me lift the mower off him. He was sure glad to be free! My veterinarian brother says JRT’s shouldn’t wear collars as they just get hung on things while they are wedging their bodies into cramped spaces. But after losing my beloved (yet incorrigible) Lily years ago with no collar, I’m always afraid somebody will pick them up thinking they are strays with no collar. Plus I can’t latch them into the back of the truck bed (they are famous for jumping out and racing after critters). To collar or not to collar? I’m caught in a bind just like Acer was. 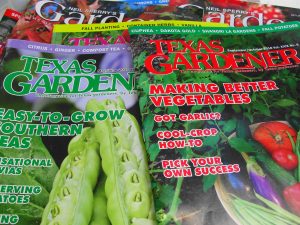 The last of December turned out to be the month where all my writing was due at the same time. In addition to my blog, I wrote an article about my late Rosie dog leading me to brown headed nuthatches for the March/April issue of Texas Gardener magazine and one on Pam’s Pink honeysuckle for the March/April issue of Neil Sperry’s Gardens. I also received the contract from Texas A&M Press for a book on “the rose rustlers” that Bill Welch and I will write. Bottom line: less eating, bird watching, and dog chasing, and more writing. I do love to write but have trouble making my ADD self sit still at the computer long enough to produce a book. Magazine articles fit me just perfectly but books do not. I do love them though and will try my best to keep turning some out. Cold weather should help. One more month of cold (and writing) then my beloved jonquils start to bloom. No way I’m coming in to write when that happens! Until next month, grab a seed catalog and plan a garden. -Greg