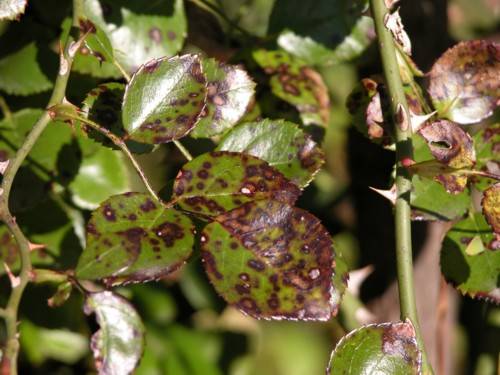 Disease is a major source of plant damage in roses with the most common rose diseases being caused by fungus.  While some rarely-contracted rose diseases are caused by viruses or bacteria, more often than not, it is fungi that wreak havoc in our rose gardens.  Nationwide, blackspot fungus (Diplocarpon rosae Wolf) is the most common rose disease.  Powdery mildew (Alphitomorpha pannosa) runs a close second in its commonality, but unlike blackspot outbreaks tend to be seasonal. Occasionally, outbreaks of downy mildew (Peronospora sparsa Berkeley) and botrytis blight (Botritis cinerea) may be found, but these diseases appear much less frequently than either blackspot or powdery mildew.

Damage due to fungal attack can range from one extreme to another on the seriousness scale – from repeated loss of leaves (weakening the plant) to less damaging symptoms of minimal lesions (spots) on foliage and canes.  Roses with high levels of infection produce less new growth and fewer blooms because their leaves (which are needed for photosynthesis) are affected by disease and fall off.  Because of the important role that foliage plays in the overall health of the rose bush, repeated defoliation ultimately impacts the health and longevity of the plant.

Roses differ in their susceptibility to fungal attack with modern hybrid teas being the most susceptible.  If left untreated, infected susceptible roses can lose a large percentage of their

leaves. Fifty years ago, Dr. Griffith Buck, identified the correlation of leaves to plant hardiness finding that roses with the ability to hold onto their leaves even when infected by fungus were hardier, more disease resistant landscape plants.  This correlation has been reinforced through the Earth-Kind® Rose Research Program being conducted through a partnership between the Texas AgriLife Extension Service and the Houston Rose Society.

Fungal diseases are best managed through a multi-disciplinary approach that includes: (1) plant selection, (2) planting times, (3) level of fertility, (4) sanitation and (5) applications of fungicides.  Some roses exhibit more tolerance than others to attack by common diseases.  The susceptibility of a rose variety to disease will dictate the management practices that must be employed to maintain the health of the garden site.

There are many roses on the market that have exhibited tolerance to disease, however, there is an even larger population of roses that are highly susceptible to fungal diseases.  The gardener’s job is to balance plant selections so that management of fungal diseases in their roses can be attained within the maintenance parameters the gardener has available.   Planting young new roses at times when environmental conditions are ripe for disease development without protecting those plants against attack tends to invite the disease process.  Some hypothesize that excessive fertilization in early spring and late fall (when w

eather conditions support disease formation) can initiate the process.  There is some logic to this theory as blackspot and powdery mildew tend to attack new plant growth first.  Heavy fertilization encourages the development of new growth that, if left unprotected, is fair game for fungal pathogens seeking a host.  However, cultural practices alone will not eliminate diseases from the garden.

“Fungicides” are a specific type of pesticide that controls disease by inhibiting or killing the disease-causing fungus.  They work by (a) attacking and damaging cell membranes, (b) interfering with energy production, or (c) interfering with the life cycle of the fungus.

Some of the newer disease treatments on the market do not directly affect the fungus itself, but instead boost the plant’s natural defense system causing the plant to produce thicker cell walls and anti-fungal proteins so that the plant is better able to defend itself when disease pressures are high.  Examples of this would be products like Messenger and similar “biorational” treatments.

While most fungicides are only capable of protecting uninfected growth from disease, only a handful are effective against pathogens once infection occurs.  For this reason, to be effective most fungicides should be applied (a) when environmental conditions are right for disease development, (b) before disease occurs, or (c) at the first appearance of symptoms.

Fungicides fall into two categories – “curatives” (products that attack fungi that have already infected the plant) or “preventatives” (products that inoculate plant tissue so that the plant is better able to fight off disease.  Fungicides with curative properties would include products sold under the trade names, Mancozeb, Manzate and Fore and products containing Maneb.  Preventative fungicides would include products such as Rose Pride (formerly known as Funginex), Rose Defense, Daconil and products containing Neem oil.

Some homeowners start applying fungicides to their roses only when the plants lose all their leaves and then stop spraying once new growth emerges.  Other gardeners use fungicides for the wrong purpose – for example using a preventative on a bush exhibiting symptoms of heavy blackspot infection.  These treatment approaches are wholly ineffective in controlling fungal diseases.

Once defoliation occurs, pre- ventative fungicides become ineffective.  In this instance, applications of a curative fungicide, such as Mancozeb, applied every five days for three weeks (or as directed on the manufacturer’s label) is

critical to establish disease control.  I have found that it takes three weeks of regular applications of a curative fungicide in addition to good garden housekeeping to reestablish disease control.  The need to spray should be dictated by  four factors:  (1) the health of the rose, (2) the environmental conditions, including the level of disease pressure that may be present, (3) the disease susceptibility of the rose, and (4) the desired level of plant perfection.

Fungicides come in powder, granular and liquid form.  Most are mixed with water and applied by spraying the mixture onto the plant.  A few fungicides are applied to the soil where they break down into compounds taken up by the plant making the plant toxic to the disease.  For spray applications, coverage of all parts of the plant (upper and lower leaf surfaces and from the top to the bottom of the plant) is critical because very few fungicides have the ability to be absorbed into plant tissue and move through the plant.  One exception would be Aliette, which is applied as a spray treatment and then translocates through the plant’s system from the leaves to the roots and back to the foliage on a “seek and destroy” mission.

On susceptible roses, effective control of fungal diseases may necessitate multiple applications of fungicides – sometimes as frequently as once weekly from the first flush of new growth in the spring until the first hard frost in the fall.  These repeated applications are necessary to protect emerging new growth and to replace fungicide product lost by decomposition, degradation by sunlight and/or removal by wind and water.  Unfortunately, repetitive applications of the same fungicide can lead to the fungus developing resistance to the treatment – making treatment applications ineffective.  (Fungicide resistance is discussed in another article in this series).

Keeping susceptible roses healthy requires some application of fungicides, especially when conditions support disease development.  Blackspot spores germinate and infiltrate cell tissue when temperatures are between 65 – 85° F and when moisture is present on the foliage for seven hours or more.  Powdery mildew tends to appear when humidity is high but conditions are dry and cool (warm days / cool nights).

Fungicide labels contain the words “contact” and “systemic”, which is a general description of the method by which the product kills fungal pathogens.  “Contact” fungicides are applied to and remain on the plant surface and do not penetrate into plant tissues.  Contact fungicides must come in contact with the disease-causing pathogen to be effective.  Examples of contact fungicides are Mancozeb, Fore, Manzate and Daconil.

Often these types of fungicides leave a spray residue on leaves and stems and only the parts of the plant with spray residue are protected from infection.  Contact fungicides are very sensitive to the environment and are usually effective for 7 to 14 days, however product life depends the amount of rain/irrigation the bush receives and the amount of UV rays the chemical is exposed to.  One to 2 inches of rain will reduce the residue of contact fungicides by half, but rainfall of 2 inches or more will eliminate the product from the plant. The product label will provide direction on application frequency.

Systemic fungicides, sometimes called “penetrants”, are absorbed into the plant and have the ability to move from the application site (similar to how blood moves through our bodies).  The distance that systemics are able to move within the plant is dependent on the nature and type of fungicide used.  Some systemic fungicides stay in the leaf tissue.  Others have the ability to travel from the leaves to the root system, but not back up through the plant structure.  Only a few systemic fungicides, like Aliette, can travel up and down freely within the plant.    Some of the common systemic fungicides used in rose gardening are Aliette, Fertilome Liquid Systemic Fungicide, Monterey Fungi-Fighter, Rose Pride (Funginex) and Bonide Systemic Fungicide.

Mode of Action – How They Work

How a fungicide works is called its “mode of action.”  Fungicides are manufactured in such a way that their modes of action attack either “single” or “multiple” sites within a fungus.  Single-site fungicides target one critical component (usually an enzyme or protein) needed by the fungus for survival. The slightest mutation of the fungus impedes the effectiveness of the fungicide treatment by camouflaging the product’s target.  Fungicides with single-site modes of action are Rose Pride (Funginex) and Green Light Systemic Fungicide.

To Spray or Not to Spray

A good disease management approach includes cultural and environmental controls, in conjunction with the right type of fungicide, including:

A gardener need not hold a Ph.D. in chemistry, toxicology or plant pathology to effectively treat fungal diseases.  With all of the rose care products on the market today it may seem a daunting process to select the right product for the disease process in your own garden.  This is where a local consulting rosarian can help.  A list of consulting rosarians with the Houston Rose Society is available on the Society’s website: 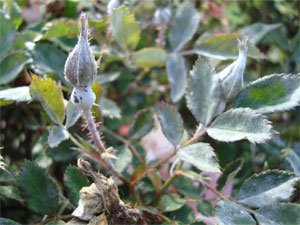 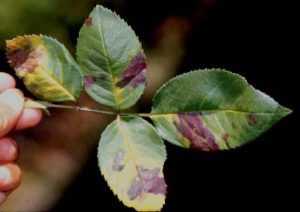 This Guest Blog Information thanks to:

(The information given herein is for educational purposes only.  Reference to commercial firms or products is made with that understanding that no discrimination is intended and no endorsement of those firms and/or products by the author or the Houston Rose Society is implied.)