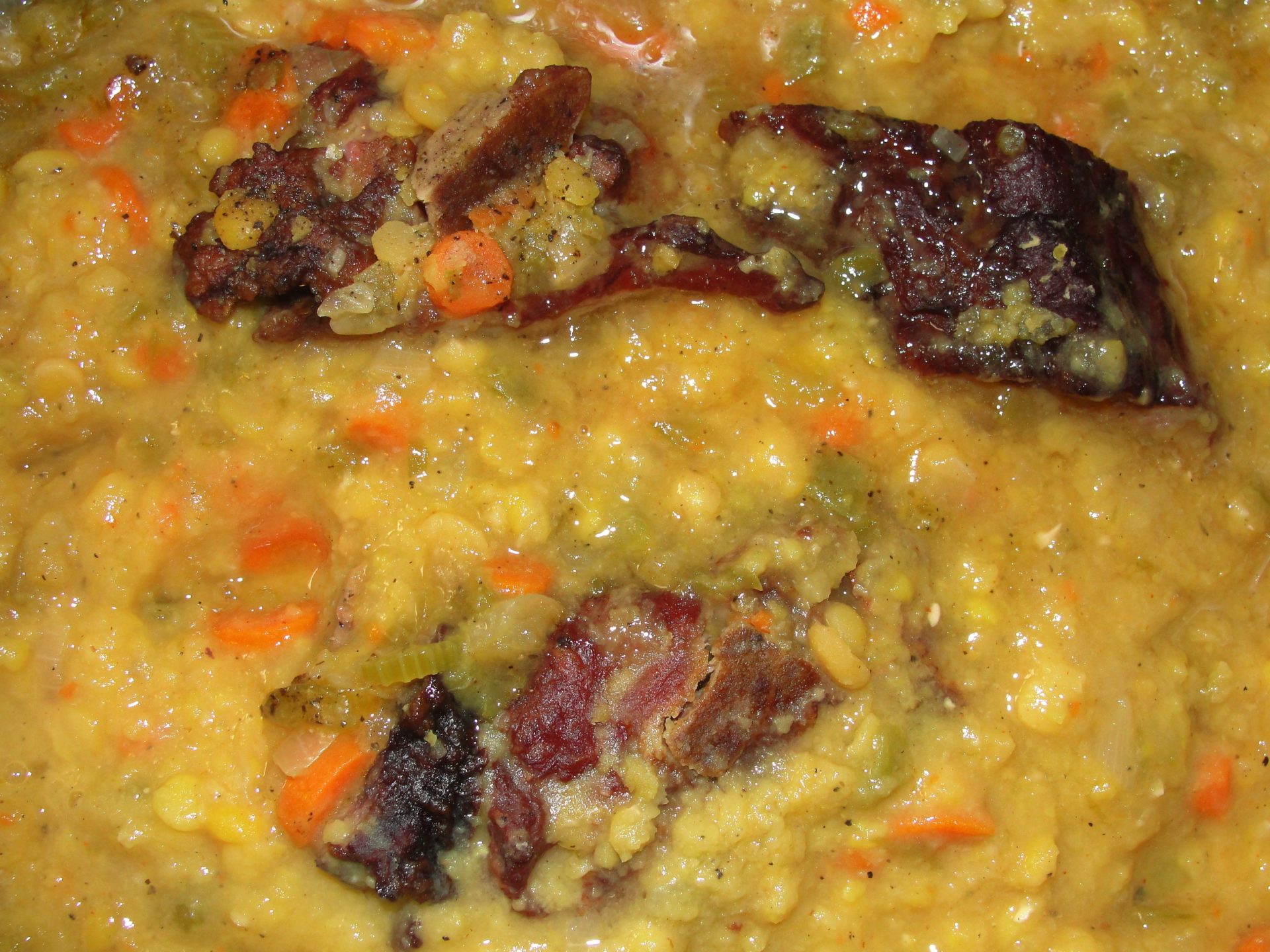 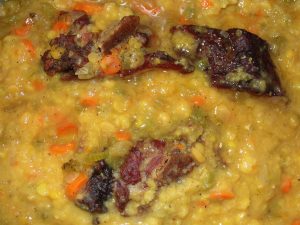 I’d be lying if I said I wasn’t struggling with my recovery from a second hip replacement. Yes, I know it’s been two months now and I should stop whining and move on. Yes, I should be thankful that my parts are getting newer while yours are getting older. But that’s easier said than done. After shoulder, neck, and back surgeries I reluctantly gave up sports. But give up gardening? Never! However, months worrying about getting in and out of the truck, walking up and down steps, and how to put shoes and socks on has been both a mental and physical struggle. The whole situation has forced me to find comfort any place I can. Thank goodness the folks at Big Chill had mercy on my soul and shipped me a new refrigerator; for food and cooking have always been two of my cherished comforts. I’ll be forever grateful to my beloved Grandmother Emanis who sat me on the kitchen counter in this very house and indulged my desire to be a chef.

Most certainly it was another ordeal getting the behemoth new retro refrigerator into my tiny kitchen. If it wasn’t for my Uncle Noel, my dad, and my friend and carpenter Larry Shelton, I’d still be cursing a shiny broken one in the kitchen and staring at an oversized cardboard box on my porch. I love collecting foodstuffs, not throwing them out! One year of not knowing whether my food was preserved or ruined was a bit more than I could stand. When back in the chilling business I hurried to the grocery store and grabbed a few staples to whip up split pea soup with smoked pork neck bones plus some bread flour for my rustic Italian bread. This time I picked up a bag of yellow peas instead of green just so see what they were like. Their yellow color made it look like corn soup. I prefer to season my split pea soup with Cajun smoked tasso now instead of bacon, but unfortunately South Louisiana is five hours away. I didn’t grow up eating split pea soup, but when I first tried it at Schilo’s on the River Walk in San Antonio many years ago, I was hooked. I would always order it with turkey and Swiss on rye and a frosted mug of root beer, on tap. I didn’t grow up eating rye bread either, but found it the perfect combination with the soup. It was years later that I learned that the seeds in the bread were caraway, not rye. 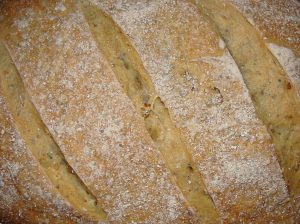 I can’t help it. I love bread, especially crusty ones. Eventually I discovered something the Central Market in Austin sold as their “Seeduction Loaf” and decided that would go into my comfort basket as well. So when I first ran across a recipe for Pane Rustica that looked like something I could master, I promptly added sunflower seeds, poppy seeds, and sesame seeds. I never could find any combination of whole grain flour that had a texture I liked, so I use regular white bread flour and sneak in a few whole grains by adding a fourth of a cup of quick oats, sprinkle the pan with stone ground cornmeal, and dust the top of the bread with stone ground rye flour. I also add a dab of local color and flavor by including a tablespoon of ribbon cane syrup (for the yeast) plus a tablespoon of virgin olive oil. I cook it for 40 minutes at 400 degrees which creates a hardy crust that has to be enthusiastically sawed with a bread knife. Wimpy pre-sliced store bought bread is for the chickens, literally.

I love fresh fruit and juice as well. So just imagine my delight when dear friend and retired extension horticulturist Dr. Jerry Parsons sent me a plethora of hand-picked citrus from Uvalde. He must really love me, as he picked them himself; then drove the cache from San Antonio to College Station, where another dear friend Dr. Andrew King of Texas A&M drove it all home to Tenaha for me to pick up at King’s Nursery the next morning. Jerry doesn’t do anything small, so naturally he sent me a box of Seto satsumas, a box of Okitsu satsumas, a box of Orange Frost mandarins, and a box of Lemon Frost “lemons” that look like oranges. After sharing with friends and relatives I was quickly eating and juicing citrus that had been growing on trees 24 hours before! My garden is now littered with brightly colored orange peels. 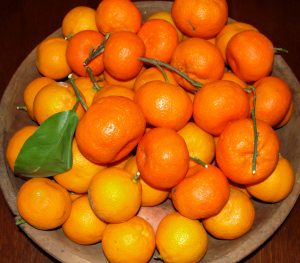 One has to be a bit crazy to find comfort in a pack of crazed terriers, but even in my current state I manage to do so. The frenetic gang and I try to take a walk through my pine forest each day, with cane in hand, to both salve my soul and to exercise their overcharged ones. Pine trees have a long history of healing, so I try to partake as often as possible. Therefore, my first real outing since my surgery was to attend the Longleaf 101 Academy in Jasper where for three days the Longleaf Alliance out of Alabama trained us, toured us, and tested us. I do love seeing what rare glimpses we have left of these once majestic longleaf pine forests. Texas once boasted 3 million acres of virgin longleaf pine forests but sadly all were cut for timber early in the 20th century. Thankfully, a passionate group of brave souls is promoting the regeneration of and planting new seedlings for the future. Any sites that William Bartram described in 1791 as “vast forests of the mostly pine trees that can be imagined” certainly deserve our preservation and restoration. With only 3 million acres of the original 90 million that existed in the South, the longleaf pine ecosystem is considered one of the most threatened in North America. The almost unbroken stand of longleaf that stretched from Texas to the East Coast was the largest ecosystem dominated by a single species on the continent. I can’t help but think of the now extinct Passenger pigeon which was once considered the most populous bird on the continent.

You know how I love birds so they have been high on my list of healing as well. To avoid the plagues of sunflower gorging goldfinches, I keep my winter feeders stocked with a total of six no melt, meal worm peanut suet cakes. This keeps the pine warblers, Carolina chickadees, tufted titmice, and brown headed nuthatches happy; me too. The cardinals and one pushy mockingbird, among others, have learned to use them as well. I buy the suet cakes a dozen at a time now. My country birds love them but the picky city birds where I work at the SFA Pineywoods Native Plant Center in Nacogdoches won’t touch them. It makes me think of rural football players and city football players that my Papaw categorized by whether they ate cornbread or light bread. 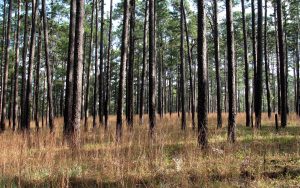 I’m especially partial to cavity dwelling birds which means woodpeckers are among my very favorite birds. After all, without woodpeckers there would have never been bluebirds, chickadees, titmice, and a host of others that can’t create their own cavities. After lightning struck and killed a big loblolly pine in my tall grass prairie project a number of years ago, a pileated woodpecker promptly excavated a cavity and made it a home. I panicked during a control burn a few years ago when most of this dead tree caught on fire. I just knew Woody Woodpecker’s home was gone. But thankfully only the sapwood burned away and never even reached his penthouse apartment in the sky. When I’m working nearby I hear him coming to roost each day between 4:30 and 5:00. So one day last month I pulled the truck nearby with camera in hand and waited for him to head to bed. At 4:46 pm he lit on his perch, cackled a few notes, and hitched his way into bed. The whole experience was far better than a pain pill. And yes I know he’s a male, because of his red mustache.

Although sitting has been difficult, I still find time to write. The book with Dr. Welch on rose rustlers has been turned in to Texas A&M Press and now impatiently awaits our image selections. Hopefully it will be out in 2017. My latest article for Texas Gardener magazine is on my childhood inspiration, Euell Gibbons. Pick up a copy or subscribe at texasgardener.com if you get a chance. 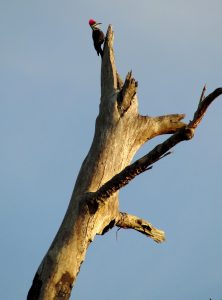 I know times are tough when I find myself reaching for a beginner’s recorder and piping out Scotland the Brave each day. I wish I could thank the late Wilber Martin, my music teacher at Mozelle Johnston Elementary School in Longview for teaching me to tap into my Highland roots. The bagpipes are next! Until next month, march to the beat of your own drummer, and find comfort any place you can! -Greg