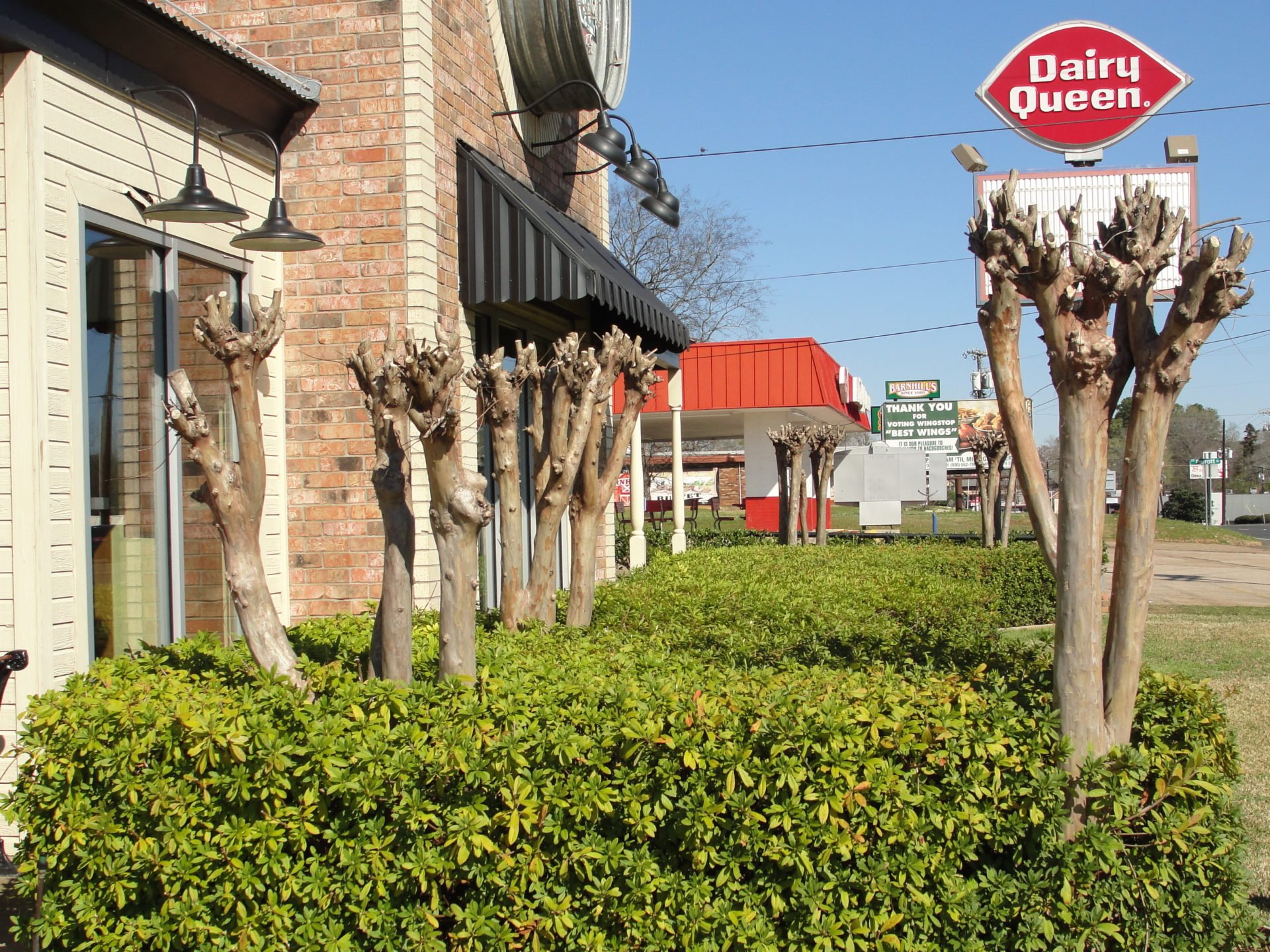 There once was a man with some gall,
Who wouldn’t let his crapemyrtles grow tall,
When asked why he did it, he replied like an idiot,
Because that’s what they do at the mall!

I can handle this one of two ways. I could say that folks who unnecessarily butcher their crapemyrtles each year are senseless morons that have no concept of natural beauty, obviously can’t read, and most likely tortured helpless animals as children. But I won’t. After all, I’ve tried that approach in the past and obviously failed. It just makes people childishly spiteful who in turn, botch more crapemyrtles in a grand show of mindless horticultural insubordination. But let’s get one thing straight right off the bat. I don’t care if you have ugly crapemyrtles! I have beautiful ones of my own and I do precious little to deserve them. Why should I care if yours look hideous? I actually look forward to my annual dose of dormant season amusement when both homes and businesses hang big signs in their landscapes that boldly state “I AM STUPID!” But I am a teacher, so this month let’s cover some crape murderous facts, then next month I’ll get back to my normal blog where I tell you which dog I love the most, what I’ve eaten, and which body part fell off last.

Like many gardeners I’ve spent a good portion of my life planting plants and watching them die. But unlike most, I’ve also spent an even greater amount of time traipsing through long abandoned gardens and old cemeteries learning which plants are truly adapted to Southern gardens. Amazingly enough, some of the prettiest plants I’ve ever seen have received no care at all. These include fields of naturalized jonquils that had never been watered, gorgeous tea roses taller than your head that were never sprayed, and spectacular old crapemyrtles that looked like something Michael Angelo would have sculpted. Unlike finicky box store annuals, many plants get better with age. And even more amazing is that some plants actually do better with less care instead of more. Certainly crapemyrtles fall into that category. Show me a crapemyrtle untouched by the hands of man (or woman) and I guarantee it will be more beautiful than one sweated over by a typical landscape crew. And that brings up a good point. Although I do see crapemurder in front of residential homes, the majority of these crimes are committed around commercial 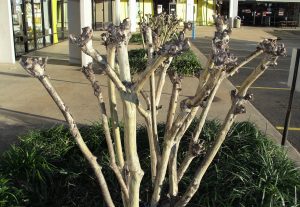 establishments. This means that the slashing and burning is mostly being perpetrated by commercial landscape crews, not typical Joe homeowner.

I’ve always wondered if the folks beating up the crapemyrtles knew they were doing wrong since I’ve never in my life witnessed the practice in action, which is truly amazing considering I’ve seen thousands of damaged crapemyrtles. I can only assume they are stalking the helpless crapemyrtles at night and attacking them while they are sleeping. 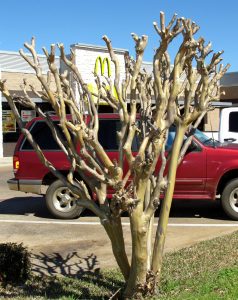 front of your 3 feet high windows. However, many of the topped and disfigured crapemyrtles are growing out in the open, nowhere near power lines, buildings, or homes. How do you justify that?

Then there are the lame excuses about making it bloom better. Topping crapemyrtles does not make them bloom better. It does make them produce larger (although fewer) flowers, but unfortunately in addition to ruining their natural shape, it causes the bloom stalks to bend under the larger flower weight. I’ve even seen crapemyrtles bound with ropes to hold the flower stalks upright. Topping does lead to excess sucker formation at the base of the tree, decreased cold hardiness, and there’s even some evidence that it leads to an increased risk of the dreaded crapemyrtle bark scale.

But even more importantly, it’s about basic floral design. A typical crapemyrtle rises from the ground with a single trunk which branches into something like 3, then 15, then 30, then hundreds of smaller twigs and blooms. But once they get topped, the progression goes from 3 to 15 to 100 and looks unnatural and unattractive. Imagine purchasing a dozen stems of Valentine’s Day roses 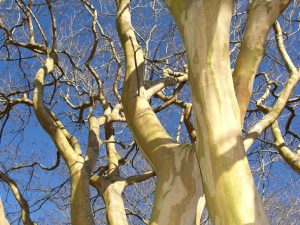 with 100 more stems and roses crowded at the tips. Though you might be proud of the extra rose bargain, this wouldn’t look natural. I would assume somebody sprayed them with 2, 4-D herbicide to produce the effect or the equally dreaded rose rosette disease was to blame. Worst of all, the more they are topped, the more grotesque callused “scar tissue” forms. Before long they look like the botched plastic surgery folks on shock TV.

There are also those who say the trees won’t bloom unless the seed pods are removed. Hogwash! The only time removing seed pods increases re-blooming is if they are removed immediately after the petals fall, when the pods are still green. Removing dried seed pods may be aesthetically pleasing to some but has no effect on the next season’s bloom. Name any other tree in the landscape where we take the time to cut off perfectly natural dried seed pods? None. Seed pods on crapemyrtles are perfectly natural like gumballs on gums or pine cones on pines. And for that matter, name any small ornamental tree that we top annually and make up lame excuses why we did it? None. No matter what the location or what the size, I never see Bradford pears, dogwoods, fringe trees, Japanese maples, loquats, Mexican plums, or Texas mountain laurels hacked on with such smug confidence. Sadly, the fact that crapemyrtles produce showy annual blooms in spite of our ignorance makes them the perfect candidate for this maltreatment. 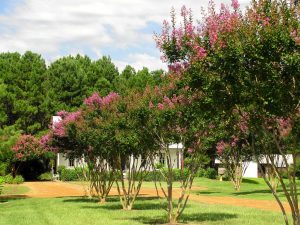 I have friends and colleagues who wish I’d shut the heck up about this. My dear friend Felder Rushing says it’s everybody’s right to top their crapemyrtles if they see fit. He’s right. However, millions of dollars, gallons of fuel, and man hours are spent on this practice that isn’t recommended by a single expert or gardening manual on the planet. Every last authority on the matter says this is wrong yet it has now become the norm. It’s the most unbelievable phenomenon I’ve ever witnessed in the landscape.

But, I’m not going to lose any sleep over it. As long as I’m alive I’ll always have my beautiful unmarred crapemyrtles and surely there will always be a few abandoned crapemyrtles somewhere looking spectacular and beautiful the way nature taught them over thousands of years. But if not, I took pictures just so I’ll remember what they looked like. Until next month, cut the crap, not the crape! –Greg