It’ s hard to believe with the weeks of 90+degree weather we’re having in May that we had two extended cold spells and an overabundance of rain not too long ago. It certainly made for a successful cool season garden. Kale and Italian Chard (Verde de Taglio) are still flourishing in the garden, but Harlequin bugs are building up on them and at this stage it is better to take them out and move on than to spray.

We don’t usually grow cabbage in the cool season garden—it takes a lot of room and and cabbage is inexpensive and good from the grocery store. But this year an Asian variety, Li Sun Sweet, caught my eye. It makes a nice head but it’s flat like something stepped on it. It was delicious chopped up with lots of butter, salt and pepper, right out of the microwave. Another cabbage relative, Senposai is a hybrid of cabbage x Tendergreens (Komatsuna). These two veggies are related but not that closely so there must have been some special techniques involved in crossing them. Anyway, it was a very vigorous, leafy green with huge leaves like a collard on steroids. I was trying to describe it to someone in an email and I quipped it was the size of a toilet seat lid—descriptive, but not the best culinary analogy.

A new broccoli for us, Castle Dome, was productive with lots of side shoots. We also grew Depurple cauliflower which was almost too pretty to eat and Veronica cauliflower. This is the first Romanesque (Italian Style) cauliflower we’ve done well with. It tasted a little nutty and was very tasty cooked with sweet cream butter. It will definitely get a spot in next year’s fall garden.

Some of the other cool greens planted in the garden/landscape included Miz America and Feather Red mescluns. A romaine from seed purchased at the local feed store named Picos (did a search on the name and never found anything—typo maybe?) was excellent and easy to grow. Red Gabriella lettuce was a knockout although a bit slow to get started as a seedling.

A couple of spinach varieties looked good (Double Take and Robusto). Unfortunately they quickly bolted to seed with long days and warm weather. Bend and Snap and Sugar Daddy sugar snaps did well though some were knocked out in the two cold spells we had. In one case a frost cover made the difference and kept them going until Powdery Mildew began to take over.

Growing short-day onions from seed was a relative success. We started by planting seed in October in raised beds to produce our transplanting stock and then the seedlings were transplanted into the lower garden. There was quite a bit of difference in vigor of the various varieties and that may have been a result of where they were planted but it became obvious that the stronger seedlings made the biggest and most onions. The initial challenge though was finding a source for short-day onion seed. Grano and Granex Hybrid are available in a number of catalogs but surprisingly we found a bunch of varieties in a catalog out of Connecticut—WWWNESEED.com, 122 Park Ave., Bldg H, East Hartford, CT 06108. We planted some nine varieties and harvested a lot of onions. Short-day onions don’t typically store real well so we’ve been sharing a lot of them and eating all we can. I like onions but I don’t typically eat them like an apple, but some of these were very mild. I had a sandwich for lunch one day and after the cheese, meat, lettuce, mayo and tomato there didn’t seem to be room for a slice of red Chianti onion. So I just left it out and nibbled on it as I ate the sandwich. It was very sweet and had a bit of spicy onion kick toward the end. I’m sure hoping what’s left of the crop keeps better than expected. Other good ones included Sapelo Sweet, Pink Diamond, Yellow Granex PRR (Pink Root resistant), Pumba (big onion) and Rio Rojo. Onion seed doesn’t keep well so it’s best to buy new seed each fall for planting. As an experiment, I also bought a bunch of onion seedlings at the store and set them out about the same time as my seedling transplants. They made a few onion bulbs but they were smaller. Maybe that’s why gardeners that buy these commercial transplants in the fall and set them out instead of at the recommended January planting time get full-size onions. They don’t get stored as long and they have more time to recover from being cut out of the ground, chopped off and wrapped in a bundle. My seedling onions were carefully dug out a handful at a time and transplanted to the garden, intact with a nice clump of roots. Each variety was watered in as they were planted and most got off to a great start.

This is the time of year when cool season crops begin to get in the way of the need to plant warm season crops. The kale still looks pretty good but the lettuce, chard and spinach are rapidly pushing up and bolting to seed. I’ve got a bunch of peppers, eggplants, squash, cucumbers and 83 tomato varieties planted this year. In some cases I’ve set out several plants of our favorites or highly touted varieties so the grand tomato total is around 100. I’ll have a complete report with photos on the tomatoes, etc. by mid- Summer. With varieties like Bad Horsey, Dirty Little Chicken and Atlas beefsteak, it should be a tasty and interesting season. BLT’s anyone? 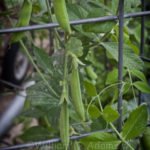 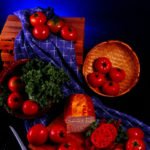 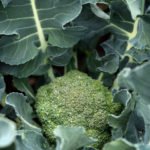 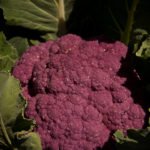 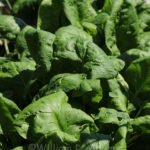 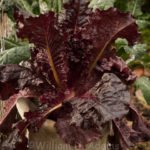 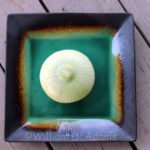 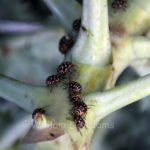 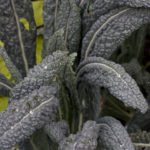 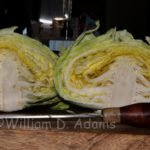 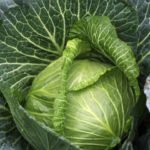 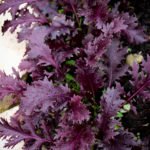 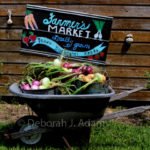 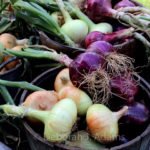 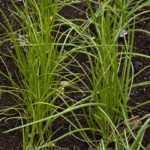 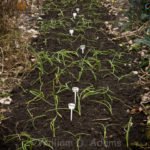 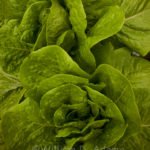 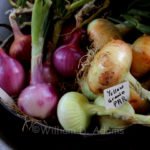 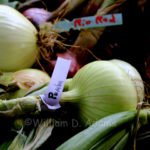 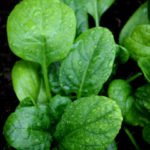 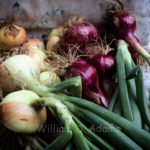 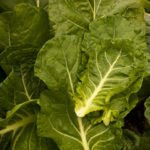 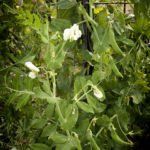 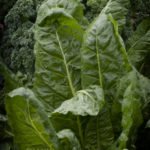 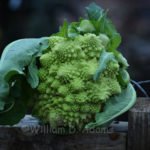