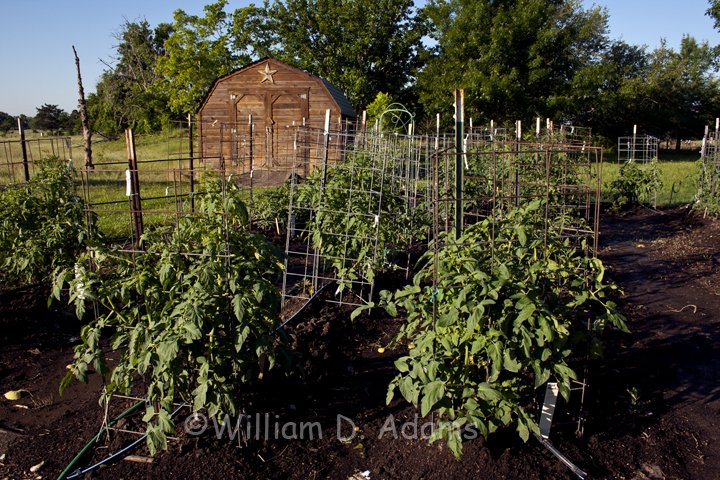 It’s been a rainy spring and the tomatoes are growing rampantly in their raised beds built up with mushroom compost. Not too much Early Blight fungus so far but a wet spring usually makes it worse. If you decide to spray with a fungicide be sure to spray the underside of the leaves where the fungus gets its start. It also helps to remove the lower leaves for better air circulation and it makes it easier to spray the remaining leaves. Daconil is probably the best of the few fungicides generally available and it has a short waiting period to harvest. Organic gardeners may want to try Serenade, a bacterial spray that aggressively colonizes the leaf surfaces and out-competes most diseases.

Fertilization is important at this stage to encourage strong growth and early fruit set. Hybrid varieties like Big Beef seem to need more fertilizer than heirlooms-some of which seem to make too much foliage while forgetting to set fruit. Weed control in most of our garden is affected with a combination of old magazines/newspaper covered with organic mulch like mushroom compost or alfalfa hay—and my favorite scuffle hoe comes in handy too. I’m also working on the orchard with a similar mulch regimen as the magazine and office paper boxes fill up. Looks like I may end up moving the majority of the 14 cubic yards of mushroom compost with a wheelbarrow. Its hard work, but the wheelbarrow and a shovel is more efficient than using the front end loader. Also the tractor makes some awful ruts in wet ground.

The stock tank planted to Bush Champion tomatoes and zinnias is coming on. I rolled the tip out of the zinnias when they were about 6 inches tall and they shot out shoots from every leaf axil. This should ensure lots of flowers and stocky plants. Bush Champion doesn’t look like it will be terribly productive but if the tomatoes are comparable to the original Champion I’ll be a happy gardener. The Smart Pot planted with zucchini is looking good. The first blooms have been female, so without male flowers for pollination they will just shrivel if left on the plant. A better solution with these mostly female (gynoecious) varieties like Astia is to pick the small fruits for “Baby Squash”. The other Smart Pot was planted with green and purple basil and a Mama Mia Giallo sweet pepper. I’m predicting lots of salsa and/or tomatoes with basil in our future. Maybe a few squash casseroles in the freezer, too.

The main garden is mostly tomatoes again. I’m counting on 8-10 inches of fresh compost to get them off to a good start before the resident nematode population damages the roots of the varieties without nematode resistance. Also have Mortgage Lifter (heirloom) and Tough Boy (Momotaro) on grafted roots. These are commercial Myti Mato plants, received a bit late, in April. My tomato grafts at home looked great to start with but I took them out of the plastic bags too soon and lost them all.

The areas close to a fence or empty cage/trellis are planted to pole beans, cucumbers, climbing squash and melons. Sweet corn has been planted between tomato plants to get maximum production from our garden. By planting a row per week we can spread out the harvest over a longer period.

We have been working diligently on the small orchard this year—fighting the weeds and trimming out shoots that have come out below the graft on jujubes and pears. Due to a shipping error, I ended up with two battery-powered chain saws this year and so far, I really like both of them. The thirty-six and forty volt batteries last four hours and charge up in one hour and that’s about all the chain saw work I want in one day. The best part is I don’t have to pour out the gas and run out what remains in the carburetor to get them to start the next time. Oregon and Makita are the brands, and I’m still deciding which I like better. The Makita has a shorter bar/chain (11 inch) so it’s handy. The Oregon has a 14-inch bar and a built-in sharpener but the cutting action seems a bit more aggressive and may be harder for some folks to handle. These are dangerous tools but handy in the orchard for surgical removal of runaway limbs that are often growing too close to neighboring limbs to extract with a hand saw. Trimming the edge of the cut with a sharp knife will encourage faster healing. Keep a good set of loppers handy for the small shoots as the chainsaw leaves a ragged cut.

The orchard is overplanted with jujubes and pomegranates but the latter sure have beautiful blooms and delicious, antioxidant-rich fruit. Now if we can just figure out the best time to harvest them. The Aggie Horticulture bulletin authored by Larry Stein, Jim Kamas and Monte Nesbitt on pomegranates suggests most varieties are harvested in mid to late October. Some may ripen in September so a bit of trial and error seems necessary.

The frequent rains have been a blessing this year. Now if we can avoid flooding, drought, pestilence (including but not limited to—rabbits, birds, raccoons, armadillos, stinkbugs and spidermites)—in addition to dodging excessive heat, tornados/hurricanes, hail and terrorists, this gardening is “A Piece of Cake”. Oh, and maybe we should include the potential for a hernia from dragging in hundreds of pounds of vine-ripe tomatoes, beans, cukes and squash. No wonder some folks choose golf as a pastime!