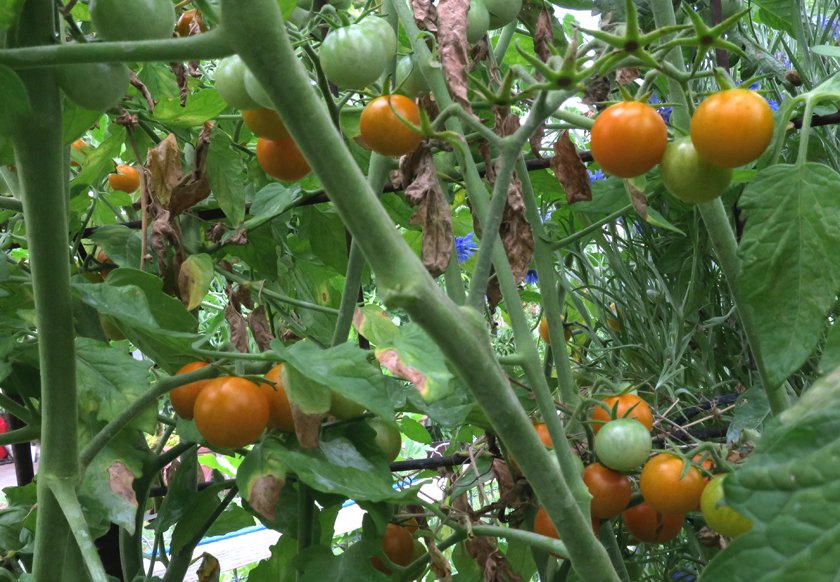 The cool-season crops are winding down in the early summer heat wave. We’ve already had our share of broccoli, cauliflower, lettuce, radishes, and garlic so we’re not unhappy that the warm season crops are off and running. This has been the best tomato year ever due to the cool evenings this spring. Varieties are grown this season include Carmello, Tasty Evergreen (Luv me some green tomatoes), Big Beef, Dona, GGWT (Girl Girl’s Weird Thing), Champion, J D’s C-Tex Early Black, Mr. Stripey, and cherry tomatoes—Sungold and Indigo Blue Berries. Everyone should plant at least one Sungold—it’s the standard in delicious tomato flavor to judge every other tomato variety you grow. It has just the right sweet, tart flavor. Indigo Blue Berries, a slightly smaller, blue-hued cherry, is tasty but still doesn’t compare with the sweetness of Sungold. 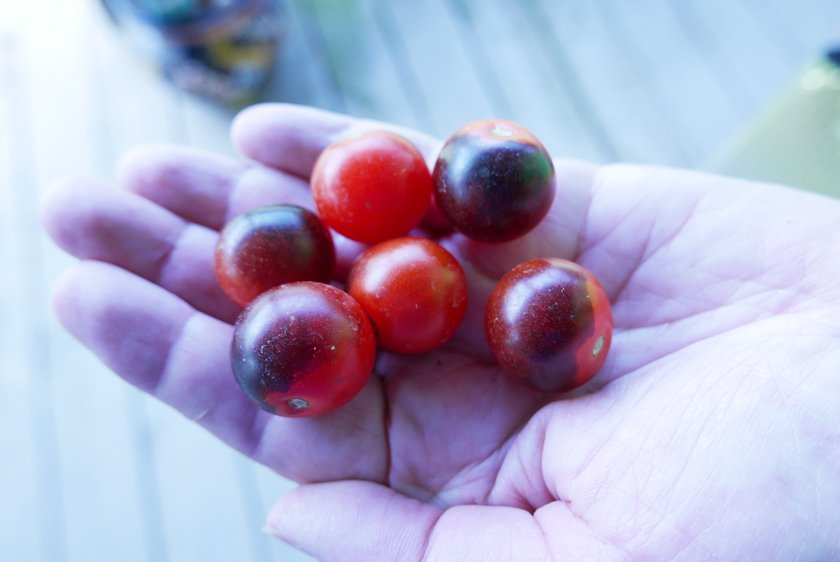 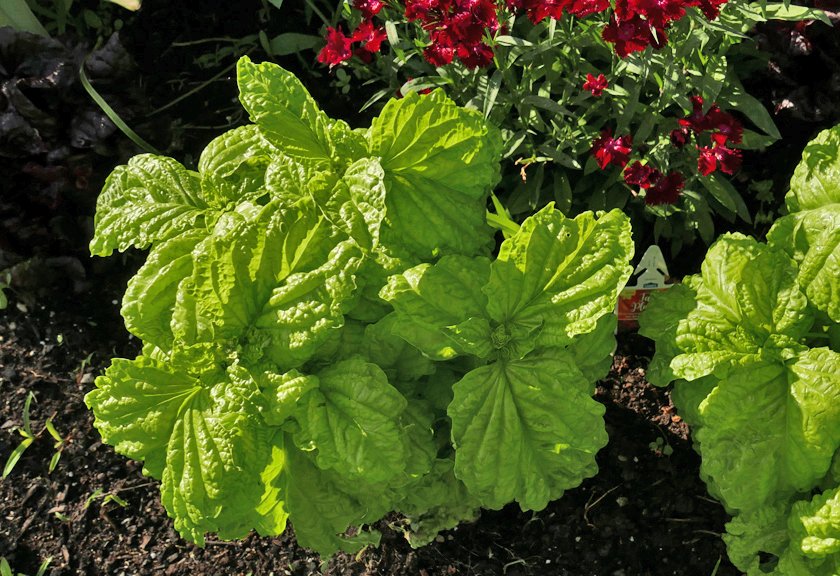 Some of the full-sized tomatoes were grafted on disease-resistant rootstock (thanks to Beverly for making these available). To be honest, I don’t yet have strong feelings about a favorite of the tomato varieties—they’ve all been great! Carmello is big and delicious, Big Beef is really big and delicious, J D’s C-Tex Early Black is big and purplish red. Mr. Stripey has been less productive than some of the others, but it produced some huge, yummy tomatoes with a red base and yellow stripes. It will only take one slice of a Big Beef, J D’s C-Tex Early Black, or Mr. Stripey to make a killer BLT. Lean over the plate or you’ll have juice stains on your clothes. Tomatoes aside for a moment—we bought a Lettuce Leaf basil this year at an Herb Society plant sale. It was suggested as a substitute for lettuce in sandwiches due to its mild flavor and large leaves. It makes an interesting variation on a BLT—or would it become a BBT? 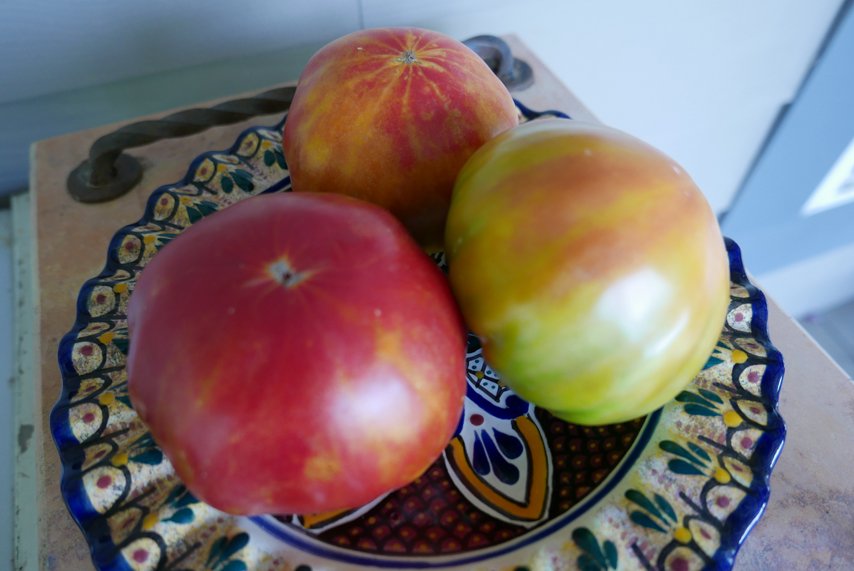 Dona is an old medium-sized favorite and oh so good! Dona is a French hybrid and a gentleman on the Tomatoville website who picked up some seed while in Paris a few years ago. I gladly paid for a packet and I’m sad to admit we may never see it readily available in the U.S A. I have a few others from Tomatovillians like GGWT (Girl Girl’s Weird Thing)—a chance seedling in a row of Green Zebra plants. Champion is back. We’ve had the Champion II’s to fall back on but they were a bit small. Bella Rosa is a new variety for us. It’s medium to large and delicious. It’s not as big as Champion but it’s early and very productive. 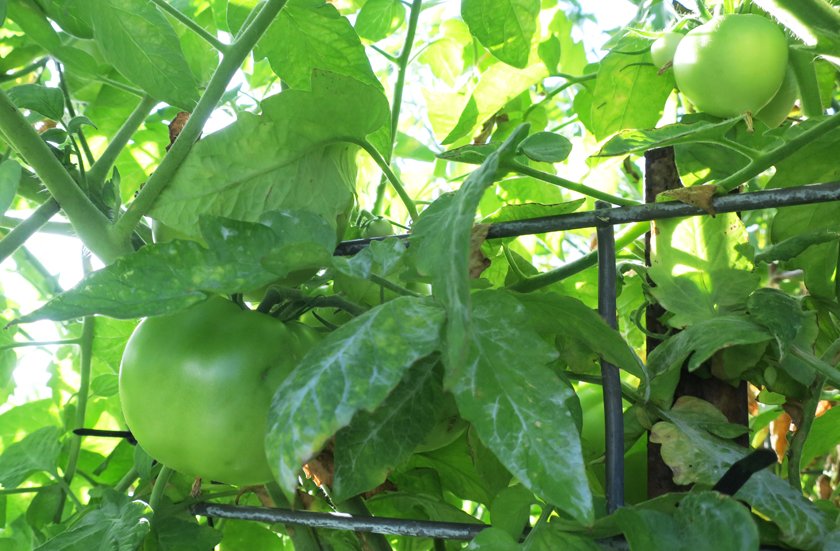 I pick most of my tomatoes when they first begin to show color and let them ripen indoors away from the insects and critters. 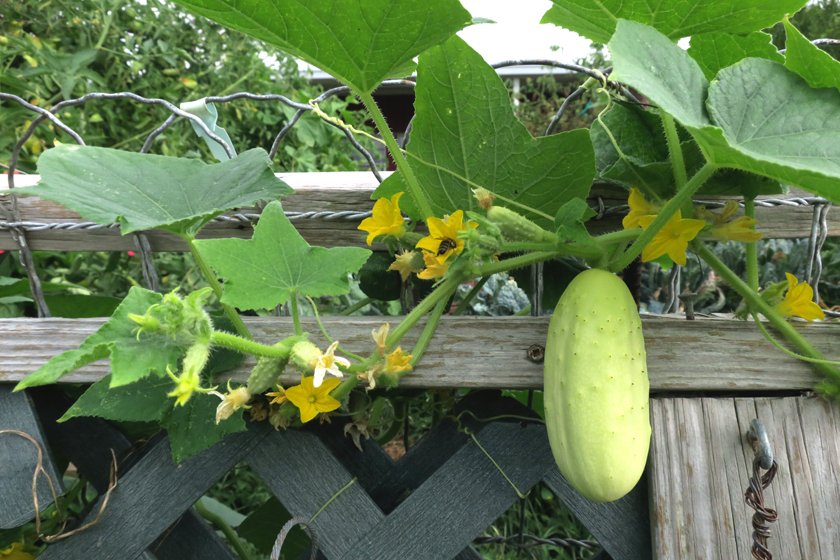 Also in the garden—eggplant, Miniature White cucumber, some yard-long varieties of cukes, and some Ball Zucchini. 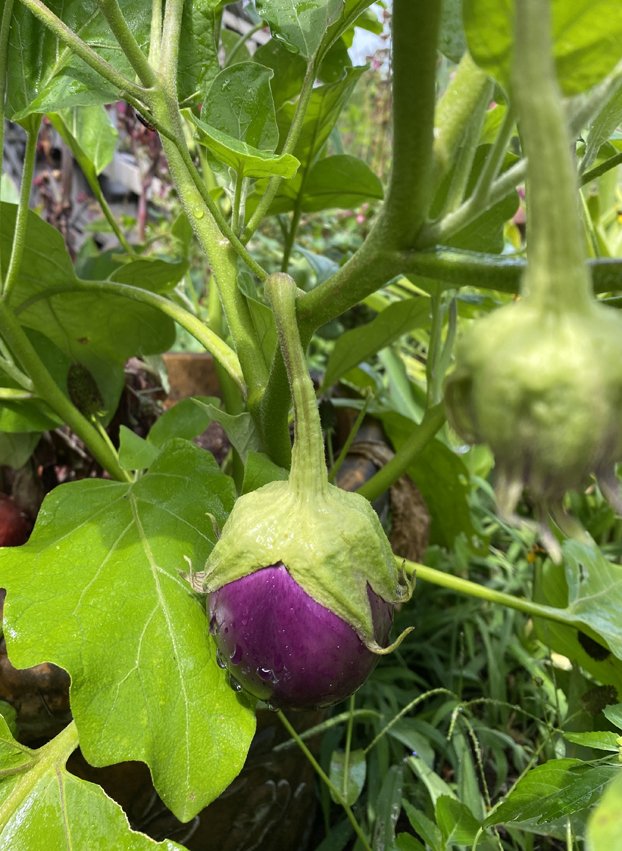 Eggplants include Romanesco and San Marino. So far we haven’t tried them but eggplants, in general, are deliciously breaded and fried (try breading with Louisiana Fish Fry). More often, they get disguised in a casserole. One recipe I saw recently used slices as a base for mini pizzas (good idea)—it’s all about hiding the eggplant! I have to confess I’m really starting to like eggplant and it’s so easy to grow. I should mention that it’s easy to overplant!

Ball zucchini is a new vegetable in our garden. They come in green, gray/green striped, and yellow. The first time we cooked some, we cut them in half, scooped out the seeds with a spoon, microwaved for two minutes, and then put them face down on the grill for some nice stripes. I then turned them over like little bowls and added a pat of butter. They have very thin skin so they are a little hard to eat this way, but the flesh is quite sweet, more like a little pumpkin than zucchini, and very tasty. I wouldn’t be surprised if they keep it until Christmas. I may try picking some when they’re baseball-sized and dice them up with some onions and sausage for a stir-fry. 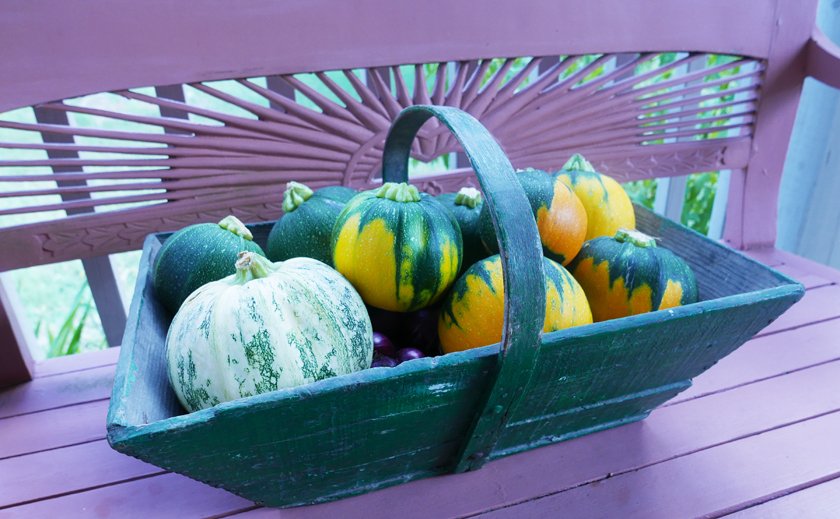 My wife Debbi has been busy canning petit-diced tomatoes, pizza sauce, and bread and butter pickles. She also canned some green tomato salsa verde and I talked her into trying some dill pickles (slices, sticks, and whole cukes). Even after using a lot of tomatoes and cucumbers for canning, the kitchen is still covered
with tomatoes, cucumbers, and a few eggplants. Home-canned is just better than store-bought! 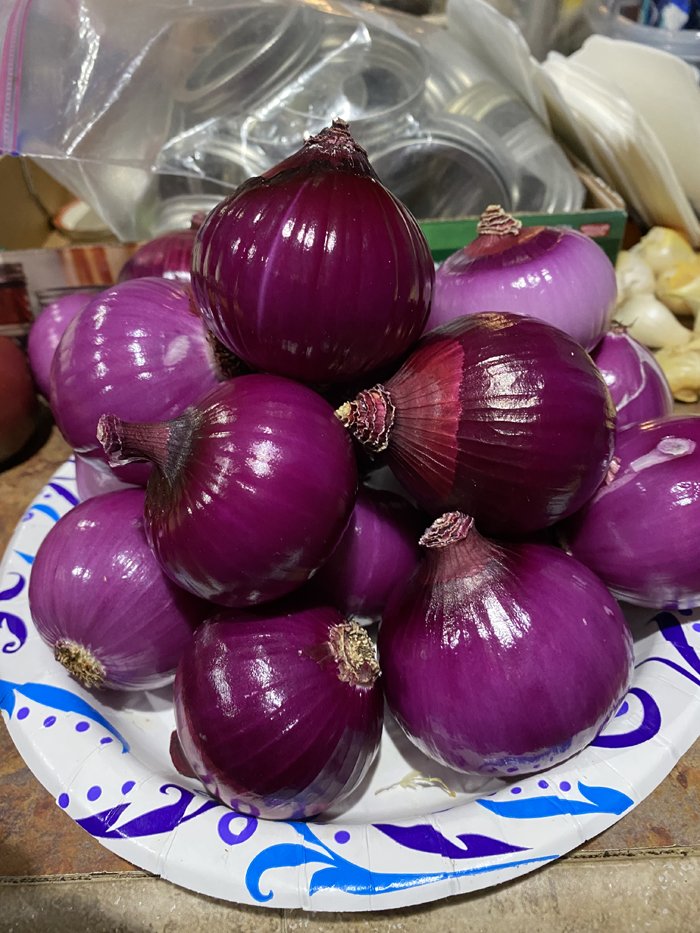 On a lark, I bought a bunch of red onion plants this spring. There aren’t many short-day red onions so I was concerned that they might not bulb. Well, they did,
and they made bulbs somewhere between a golf ball and baseball in size—a bit small but they made beautiful, sweet and sour pickled red onions (more thanks to Debbi). 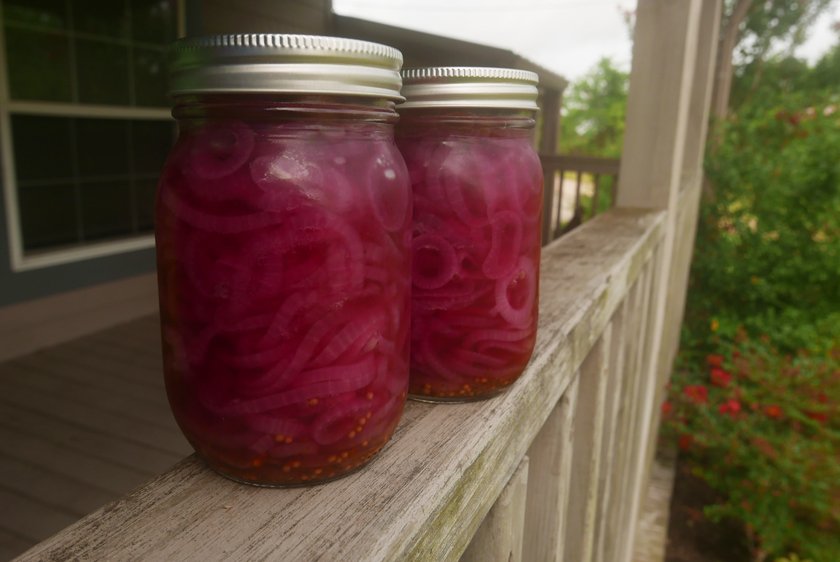 The armadillos have been busy tilling up the garden looking for worms. I could do without the help as they often damage plants, but our tomato cages are built
from sections of cattle panels so they have to work mostly outside the root zone. They seem to be rather shy of the live trap. I guess they don’t like to be
relocated. They work mostly at night, and their eyesight is reported to be marginal, but they can apparently hear the worms in the soil. They must hear me
as well since they seem to know as soon as I’ve left the garden, even in daylight. 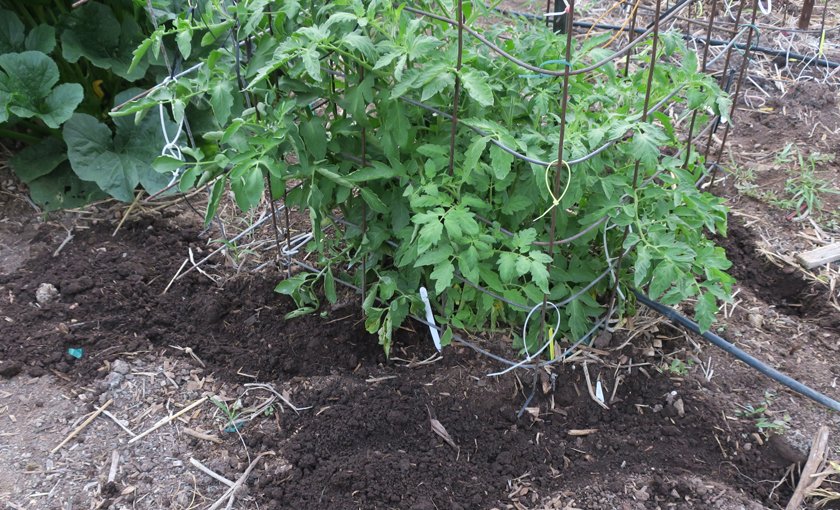 Black aphids have been damaging the cucumbers. They leave tiny white flecks all over the leaves where they’ve been feeding. I’ve hit them with high-pressure
water sprays and that helps. If I needed more production, I would have used one of the low-toxicity, minimum days to harvest (after spray application) insecticides like permethrin.

I have some drip lines around the garden, but I only partially planted the garden this year so I’ve been hand watering most of the time. It’s a bit tedious
and not the most efficient way to water but it keeps me outside and in the garden a couple of times a day.

I planted a few hills of Israeli melon to crowd out the weeds in the unused part of the garden. Obviously, I’m a dreamer, but I do have a scuffle hoe and weeds fear me when I start scuffling. It’s amazing how cutting shallow with this hoe works so quickly and efficiently. This is an old model that I ordered years ago with a metal shaft bent to a small handle at the end. This really lets you put some power into the thrust. I was gifted another scuffle hoe with a wooden handle a couple of years ago but it doesn’t allow me to put the power into the slice like my old one does. Using the straight handle hoe requires that I bend over somewhat to get
the right cutting angle. This makes for a rather tiring workout.

I just got back from picking a bag full of tomatoes and half a bag of cucumbers. Debbi’s not smiling. Guess it’s time for more gifting—we share with neighbors
until they start hiding from us. Gardening is such fun and a great way to exercise! 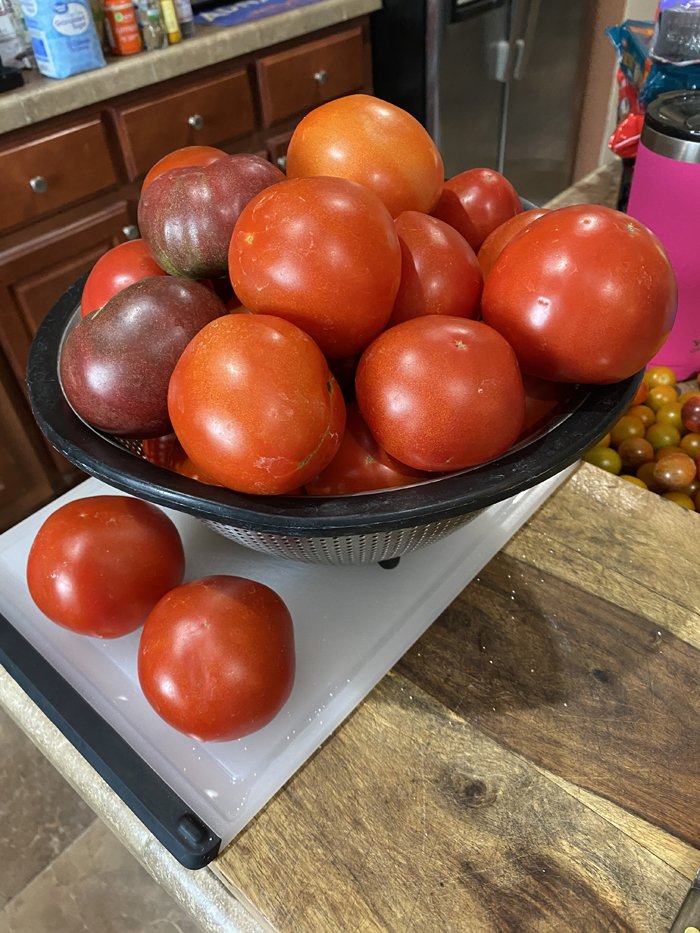 Arbor Gate is planning a jujube day in August and I will have lots of varieties ready to sample. Jujube trees will be available at the nursery. Check with Arbor Gate for the exact date. 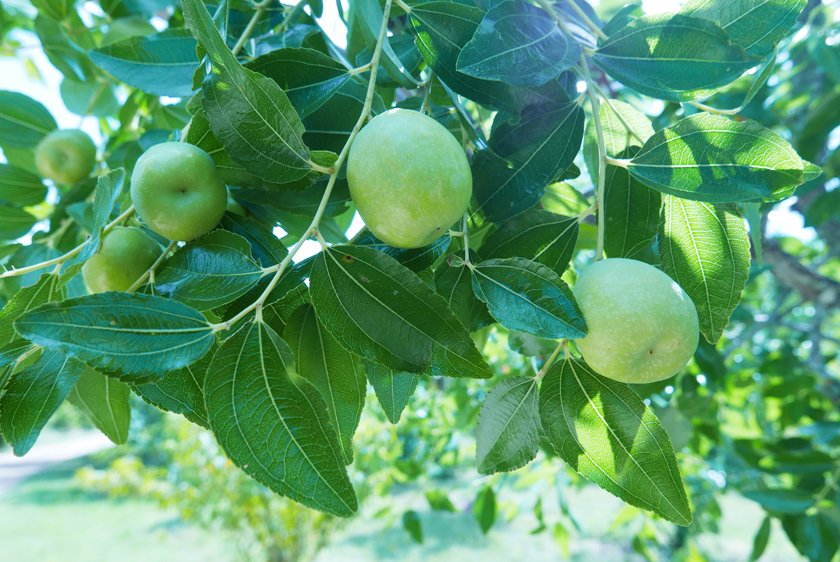