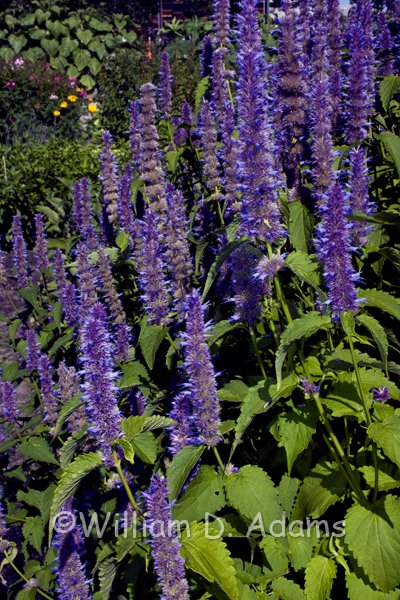 Just returned from a Garden Writers Association meeting in Quebec City and it’s really got me in the mood for the first cold front. Granted it is a bit of a shock to come home to 90’s when you’ve adjusted to 70’s but the value of a get-away like this goes beyond the respite from heat. Their beautiful summer gardens are not that different from our winter/early spring gardens. We even saw Texas natives like Salvia farinacea that could have been growing in South Central Texas in August. Too hot to go out and enjoy them in the Texas mid-day sun but we can have flowers in August—just locate them near your favorite window.

Don’t know that I’ve ever seen perennial borders punctuated with hydrangeas and Astilbe in a Texas summer garden but other accent plants like Purple Coneflower (Echinacea), phlox, cleome and Coneflower (Rudbeckia) are perfectly at home here.

One of the most striking displays that I saw was a giant butterfly planted with flowers at the Universite Laval test gardens. The celosia looks like it could be straight out of a Texas garden. The Blue Spruce in the background however, is an “only in your dreams” backdrop for most of the Lone Star state. Lavender Sparkler cleome was “at its peak” gorgeous, but it could have been growing in one of the flower beds at Arbor Gate Nursery. I was really surprised to see okra planted in several vegetable gardens. It was rather puny and the pods were long and woody, apparently left for ornament, so I didn’t snap any pix. Figured there must be a shortage of cornmeal/masa in Quebec. These pods were way past the frying stage. Saw the most beautiful plot of spinach not 20 feet down the same row. If I’d had a bowl and some vinaigrette I might have snatched a salad. Beet greens, chard and kale were resplendent too, and Agastache (Anise Hyssop) could have been thriving in a Texas garden, though maybe not this late in the season.

When we got a chance to sneak away from meetings—mostly late afternoon/evening, we walked down to Old Town Quebec from our Hilton digs. It didn’t seem very far going down. However, tired and mostly walking uphill we were glad to see the hotel after our Old Town adventures. It was like being transported to an “Old Town” anywhere in Europe, though it seemed like a smaller, more manageable and friendlier environment. French is definitely the first language but many people were bilingual and didn’t seem a bit insulted to converse in English. There were amazing shops and brightly lit alleys with art work hung on the rustic walls. Street performers like this drummer with his five gallon pickle bucket drums and super cool dog made the made the trip a delight. A couple of bucks got us a ride on the Funiculaire to the Lower Town along the river, saving a lot of steps and for six dollars we took a roundtrip ferry ride across the St Lawrence River with some spectacular sunset views. Comfortable on the deck with a cool breeze we fantasized about the luxury that must abound if we had been guests at the famous Hotel Chateau du Frontenac. When we got back to the Hilton that night we were treated to a fireworks display over the river from our window on the 22nd floor.

We toured so many gardens we began to lose track and it wasn’t just public gardens, we visited a few private gardens—garden phlox was beyond Technicolor in one of them. Even found some yard art, though it was a rather grand yard on the estate Seigneurie de L’ile d’Orleans (a spectacular series of six gardens on the Ile d-Orleans in the St Lawrence River). We even toured the Montmorency Falls (taller than Niagara Falls) and yes there were gardens there. We rode the gondola up and walked over the bridge where the falls plummet to the river below. Then we walked down a bunch of stairs—great exercise and great views.

One afternoon the Quebec Peat Moss Producers Association and the Canadian Sphagnum Peat Moss Association treated us to a peat bog tour. It was quite interesting—they’re actually replanting bogs after harvesting these days. Let’s see—Bog Tour–that’s one more thing I can cross off my “Bucket List”. This was wilderness-looking country with wild blueberries growing along the pathways. I jokingly told the next group coming out to the native, unharvested peat bog to watch out for bear scat and I’m sure I detected a sense of caution as they moved along. We wound down with beer and a lovely dinner courtesy of our hosts.

Quebec City was truly a garden lover’s paradise from giant flower pots in the intersections to Old World window boxes. Our new Garden Writer’s Association President, Larry Hodgson, invited us out to his home after the “after tour” and we got a chance to see him in his element—a living wall of plants in the bathroom. GWA members are a fun, friendly and interesting bunch of folks. While my relatives are still wondering what a horticulturist does for a living, I think I’ll just keep the details to myself.

Here are some pictures from my trip: